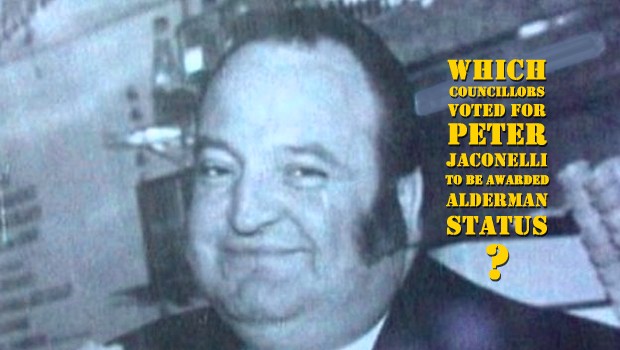 On Monday 12th May 2014 Scarborough Borough Council (SBC) voted to remove the titles of Alderman and Mayor from Conservative Peter Jaconelli. The removal was due to a large number of allegations of child sex abuse, some of them in joint enterprise with disgraced former Freeman of the Borough of Scarborough, Jimmy Savile.

Peter Jaconelli’s name was removed from honours boards at the Town Hall. The council and successive councils stated they will not endorse nor support such matters as memorials, street and/or property naming or other high recognition, office or award in Peter Jaconelli’s memory.

What are the requirements to become an Honorary Alderman? According to an old FOI request, the title is conferred upon those who have completed sixteen years service as a Borough Councillor. Two thirds of the council must vote to award the honour rather than the usual majority decision at a full council meeting.

It is known that Scarborough Borough Council will bend those rules, especially if you’re leader of the council at the time of the High Point Rendel sea defence contract scandal and you’ve only done fourteen years service.

The North Yorks Enquirer has been asking the council, since the 3rd of April this year, which councillors voted to bestow the Honorary Alderman award upon Peter Jaconelli in 1996.

Whilst the freedom of information (FOI) request was acknowledged by the council shortly after it was submitted, the council has deliberately avoided answering the FOI request. In fact, after the request was made, the council enacted a policy of ignoring FOI requests from anyone connected with the North Yorks Enquirer.

Looking at the terms of office, it is known that eight serving councillors were sitting on the council when the honour of Alderman was bestowed upon Peter Jaconelli. Those councillors are:

Given the vast number of rumours circulating Scarborough about former-Mayor’s decades of offending, why did the majority of elected representatives lavish the award upon Jaconelli? Why did the councillors think that a known paedophile was a fit and proper person to receive the Honorary Alderman award?

When the Information Commissioner has finished admonishing the council for their non-compliance with the 2000 Freedom of Information Act we may find out which elected members voted for Jaconelli to receive the Honorary Alderman award, unless the SBC paper shredders haven’t been too busy in the meantime.