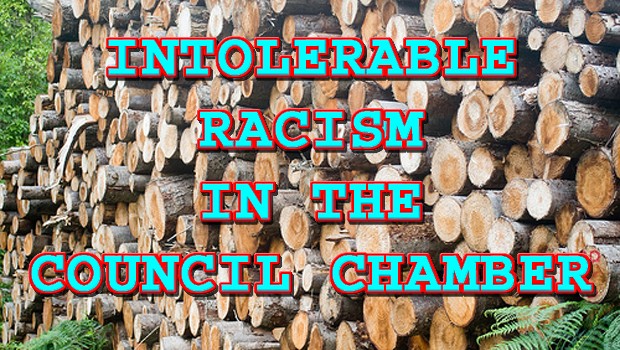 Councillor Mike COCKERILL (NPA) is a member of Scarborough Borough Council (SBC), representing Filey ward, where he lives. He is a member of the Cabinet.

Councillor Mike COCKERILL is Portfolio Holder for Harbours, Assets & Coastal Flood Protection. He is also the Chair of the Whitby Harbour Board. And according to his Register of Interests, he is (in real life) an employee of Scarborough Power Ltd.

His spouse works for NYCC and picks up extra pin-money as a “Poling[sic] clerk”.

In the financial year 2012/2013, Councillor Mike COCKERILL picked up £9,323.02 in Allowances/Expenses, including £1,625.85 for Travel. That seems rather a lot, given that the distance between his home at YO14 9ER to the Scarborough Town Hall at YO11 2HG is a mere 8 miles. According to the SBC website Attendance page, Councillor Mike COCKERILL has a 100% Attendance record for his attendance at meetings of SBC, having attended on all 9 occasions upon which he was expected to do so. Nine 16-mile round-trips. Councillors Travel Expenses are paid at a rate of 45p per mile.

Councillor Mike COCKERILL was formerly a North Yorkshire County Councillor (NYCC). However, he did not succeed in his bid for re-election in 2013, following the infamous “double-dipping” scandal in which ten elected SBC Councillors who were also serving on NYCC were exposed by the North Yorks Enquirer investigative team for having accepted Broadband/IT Allowances from both authorities for one and the same internet-connection. Encouragingly, it is my present information that five of those ten will not be seeking re-election to Scarborough Borough Council. (The temperature in the kitchen is rising fast).

Here is Councillor Mike COCKERILL at the centre of the top row in the graphic. 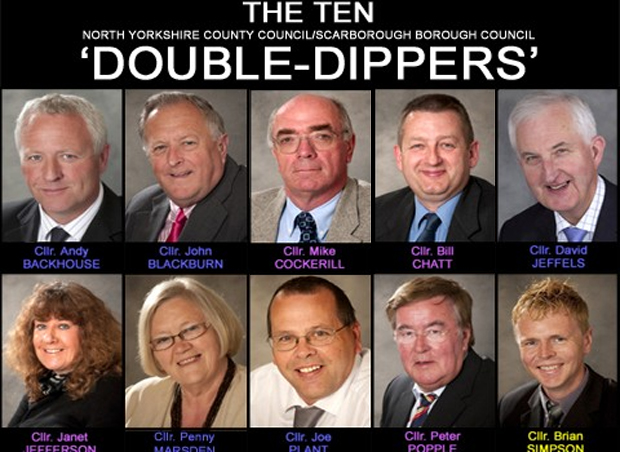 In his capacity as Chair of the Whitby Harbour Board, Councillor Mike COCKERILL has been heavily criticised and is thoroughly disliked in Whitby on account of the haughty and arrogant tone of his emails to Whitby people who have had the temerity to question his decision-making prowess. I have many examples.

When backed into a corner with questions which it would have been embarrassing to answer truthfully, his responses invariably conclude with the words:

There is an arrogant streak in Councillor Mike COCKERILL and, in my view, a malicious one, too.

Councillor Mike COCKERILL has in the past come to the attention of the SBC Standards Committee when he tipped off members of Whitby Town (Parish) Council (WTC) regarding the gross misconduct of an applicant for the position of Clerk to WTC during her appointment as Clerk to Marlborough Town (Parish) Council – Mrs Pam DOBSON – who was subsequently duly appointed despite her flakey record, arguably as a back-lash to Councillor Mike COCKERILL’s intervention.

Prior to her Marlborough appointment, Mrs Pam DOBSON was previously the Clerk to Filey Town (Parish) Council during Councillor Mike COCKERILL’s tenure there. Famously, there is considerable animus between the two.

To this day, Councillor Mike COCKERILL regularly attends Filey Town (Parish) Council (FTC), in his capacity as the reporting SBC Councillor for the Filey ward.

It rather looks as though FTC is not serious about filming and archiving its Meetings for the public record. Which is a great shame. In this respect, FTC is emulating WTC. Having resolved to (film and archive on its website) all meetings nearly a year ago, WTC meetings are still not filmed or even audio-recorded by the Council. This conveys the clear impression that our Councils do not relish being held accountable.

The crass insensitivity of the man was witnessed by Full Council when he allegedly characterised one of the principal obstacles to FTC’s wishes and intentions using a totally unacceptable racist remark – one that I could not possibly repeat in print, for fear of prosecution under the Human Rights Act 1998 and the Equality Act 2010.

Nevertheless, emails trickling in to me from multiple sources over the past few days leave no doubt as to whatquite definitely did take place.

Suffice it to say that Councillor Mike COCKERILL used a highly inappropriate and pejorative term denoting the ethnicity of “the human being in the woodpile”.

Even without the Council’s own film/recording of the Meeting, the number of witnesses who agree on the precise form of words places the FTC Clerk Gina ROBINSON in the position of being obliged to Minute Councillor Mike COCKERILL’s unforgivable lapse into the barbaric language of half a century ago. Certainly, her competence and impartiality will be called into question if she does not.

Where does this leave Councillor Mike COCKERILL.

I would contend that if a member of the public rose in the Council Chamber while a Meeting was in session and used the same terminology, a prosecution would follow. Can you doubt it?

Nevertheless, I have little doubt that right-thinking members of the public and Councillors of various political persuasions will wish to make Formal Complaints to the SBC Monitoring Officer Lisa DIXON (whose proclivity for calling black white, and vice versa, has been proven on camera by the BBC Inside Out team), on grounds of a clear breach of several of the Articles of the Councillors’ Code of Conduct, including (but not limited to) the following:

We are left to await the Decision Notice that exculpates Portfolio Holder Councillor Mike COCKERILL – Lisa DIXON’s stock-in-trade. She will most probably write his defence statement for him – as she did for the SBC “double-dippers”.

How can the members of these august bodies continue to serve with a racist amongst their number – without being perceived to endorse Councillor Mike COCKERILL’s appalling conduct themselves?

At a time when SBC is sinking into a seemingly bottomless abyss of disrepute occasioned by widespread public suspicions of complicity – both in Police brutality and in the NYP/Council paedophile cover-up on the part of Leader and would-be Mayor Councillor Tom FOX, plus the on-going scandal surrounding the Portfolio Holder for Finance, Procurement & Legal Services Councillor Jane KENYON-MILLER and her 30-year-plus tenure as Chief Financial Officer and Agent for Service of the deeply-indebted and long-bankrupt US company, Belvedere Computers Incorporated – SBC can ill afford to have yet another ‘old guard’ Portfolio Holder publicly accused of unacceptable conduct likely to bring the Council into (further) disrepute.

Unfortunately for SBC, it now has one; Councillor Mike COCKERILL.

The SBC Cabinet now fields a trio of disreputable ‘old guard’ members; the bully, the fraudster, and now the racist. What paragons of moral rectitude! What a deluge of acute embarrassment to the Council and, more importantly, to the electorate.

Fortunately, the ‘old guard’ will be losing their stranglehold on the Council on 7th May 2015.