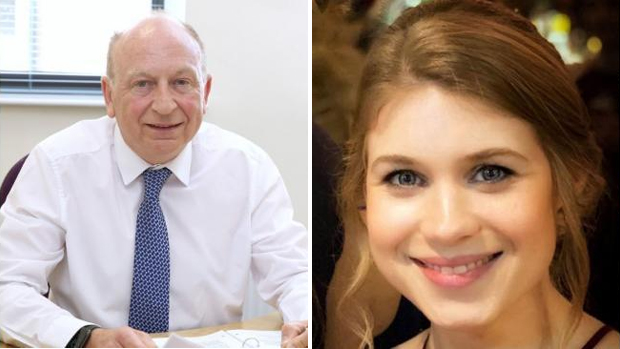 The North Yorkshire Police, Fire & Crime Panel has met and passed a unanimous vote of no confidence in Commissioner Allott.

Although Commissioner Allott had retracted his remarks and apologised for them, this was not enough to assuage widespread public anger at his remarks, which were seen –accurately in my opinion – as victim-blaming and demonstrating a refusal to hold the Police to account. Which made him unfit for office.

The final nails in his coffin were driven home by his predecessor, Conservative Commissioner Julia Mulligan, who called on him to resign. Then by his own staff in the Office of the Police, Fire & Crime Commissioner (OPFCC), who wrote to the Panel accusing him of being a misogynist, of bullying OPFCC staff and confirming they did not have any confidence in him or want to work for him.

This statement by Alison Hume, the Labour PFCC Candidate May 2021, I think captures the public mood:

It was deeply distressing to hear the newly elected Conservative Commissioner tell the people of North Yorkshire that Sarah Everard should never have submitted to her arrest by Wayne Couzens and that women should be “streetwise” around their legal rights. Over two weeks Mr Allott demonstrated absolutely no understanding of the damage his deplorable words had done and succeeded only in layering more distress onto Sarah’s family as well as victims and survivors in York and North Yorkshire.

I commend the courage of the staff of the Office of the North Yorkshire Police Fire & Crime Commissioner for speaking up against their boss. We have one of the most comprehensive suites of Victim Support Services in the country and this vital work can now continue without the distraction of a leader who simply did not understand.

At the time of the PFCC election campaign in May, my top pledge was to prioritise ending violence against women and girls.

There will now be another election.

It is time to rebuild people’s trust and confidence in the position of Commissioner.

I hope next time we elect a candidate who understands what it’s like to feel vulnerable and unsafe – and who will concentrate all their efforts in tackling violence against women and girls so that everyone can have confidence in the police service here in York and North Yorkshire.”

The make-up of the PCP reflects the proportionate political make-up of the District/Borough Councils, the North Yorkshire County Council and the City of York Council. There are ten Councillors on the PCP. Five are Conservatives, two Liberal Democrat, one Labour and two Independents. In addition, there are two independent co-opted members. The Chairman is Councillor Carl Les (Conservative), Leader of NYCC..

This means that although they do not have an overall majority, the Conservative Party dominates the PCP because it only takes one or two of the other Councillors to agree with the Conservatives and they can determine what line the Panel will take on a given issue.

Given that both Boris Johnson and Conservative Party Chairman Oliver Dowden both took the line that Commissioner Allott had retracted his remarks and apologised for them, and that no further action should be taken. There was a feeling that the Conservative members of the Panel would toe the party line and not support the motion of no confidence.

However, the Chair, Councillor Carl Les (Conservative), made it clear that the Panel was meeting to represent the constituent Councils, not individual political parties, and it did just that. It ignored party political considerations, reflected local public opinion and did the right thing.

The proceedings of the Police, Fire & Crime Panel in respect of Commissioner Allott can be accessed here at 40:00 minutes. The proceedings were observed by representatives of the Home Office.

In my view, the hearing was scrupulously fair and well-conducted, and the Panel comes out of this sad affair very well.

Where now for the democratic process?

The reason that the previous system of indirectly elected Councillors from all parties co-opted onto a Police Authority was replaced by a Commissioner was to bring real local scrutiny of how the Police performed.

Commissioner Allott was not dismissed from his £74,000 p.a. job – the Panel does not have power to do this. He could have stayed on if he so wished. His remarks constitute an act of misconduct so grave that it has resulted in criticism from all parties and ensured he lost his mandate. Yet it was not possible for him to be removed under a system that was introduced to implement local democratic control over policing. To quote Liberal Democrat Councillor Mr Darryl Smalley, who introduced the vote of no confidence:

“It’s frankly outrageous that Police Commissioners are so unaccountable to the residents they are elected to serve.”

Councillor Les confirmed that the Panel had previously written to the Home Secretary stating that the complaints process was unsatisfactory and he would be writing asking for a right of recall to be applied to Commissioners, so that the Police, Fire & Crime Panel would have the power to dismiss a Commissioner, in the same way as Members of Parliament.

Commissioner Allott is the third PFCC (or equivalent) to come to a sticky end.

Following the upholding of allegations of bullying of the staff at the Office of the Police, Fire & Crime Commissioner for North Yorkshire by the then PFCC Mrs Julia Mulligan, the Conservative Party refused to automatically endorse her as their candidate for the 2021 elections.

This was not the first time that Mrs Mulligan had been accused of misconduct towards her colleagues. Councillor Peter Dew resigned from the Panel accusing Mrs Mulligan of treating its members with “little disguised contempt.”

No doubt Julia Mulligan’s departure from the role of PFCC was met with huge sighs of relief by both North Yorkshire Conservatives – who were rid of an electoral liability – and OPFCC employees – because they will no longer have to suffer her bullying.

However, and unusually, North Yorkshire Conservatives chose not to adopt the former Chair of the Police Authority, Councillor Miss Jane Kenyon (as was) for the role of PFCC.

Councillor Kenyon had received regular coverage in Private Eye. So North Yorkshire Conservatives ditched her, preferring instead to select Mrs Mulligan in 2012.

The resurrection of Julia Mulligan

Julia Mulligan was accused of treating the Crime Panel with contempt and found to have bullied her staff. She then lost the automatic endorsement of her party – effectively de-selecting her – and then chose not to pursue her application to be the Conservative candidate at the 2021 election.

Instead of accepting some personal responsibility for her rejection, Julia Mulligan continued to deny the allegations of bullying and retaliated by blaming it on institutional misogynism amongst North Yorkshire Conservatives.

When she was found to have bullied her staff, PFCC Mulligan was the “National Spokesperson for the Association of Police and Crime Commissioners (APCC) on Transparency and Integrity”. This made her a laughing-stock and caused the APCC enormous embarrassment, which was perfectly summed up in the photoon below. 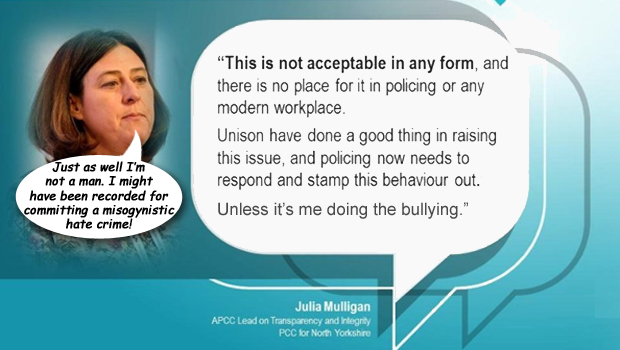 PFCC Mulligan had many successes in her term as PFCC; particularly in the way North Yorkshire Police treated victims. But overall, she was a disaster, who had to go. Her failings are well known and documented in other NYE articles, so I will not go over them here.

I had expected that Mrs Mulligan would move on after her time as Police, Fire & Crime Commissioner. She is now the chair of the charity Independent Domestic Abuse Services (IDAS) – which provides support to male and female victims of domestic abuse and sexual violence. This is important work and Mrs Mulligan and everyone who works with her should be respected for undertaking it. However, it raises other questions over the media coverage of this issue and the conduct of the Panel hearing.

Mrs Mulligan’s biography on the IDAS website as at the 14th of October 2021 states:

“Julia Mulligan currently serves as North Yorkshire’s Police, Fire and Crime Commissioner. During her time in office, Julia has transformed local services for victims, with a particular emphasis on supporting survivors of domestic and sexual abuse. Most recently, she has been successful in attracting £400,000 of government funding to set up a new women’s centre in York.”

In my view, it is wrong for Mrs Mulligan to still hold herself out to be the Police, Fire & Crime Commissioner on the IDAS website.

Mrs Mulligan has been quoted in the Yorkshire Post referring to her work at IDAS and criticising her successor as PFCC:

“There is a huge amount more to do, but I am proud of the progress made during my nine-year term by the police and my team in tackling misogyny and male violence against women and girls.

When I stood down earlier this year, I was determined to continue playing a part in these efforts, and became Chair of Trustees at IDAS, one of the largest specialist domestic and sexual abuse charities in the north of England, as well as taking up a number of senior roles in the national policing sector.

Philip Allott’s words reveal a total absence of understanding of male violence against women and girls.”

Mrs Mulligan’s comments can be read in full here. She conveniently does not mention that the reason she “stood down” was because she had been found to have bullied her staff (male and female) and her party refused to give her the normally automatic nomination as the Conservative candidate. Bullying is completely unacceptable in any work environment. In this respect I think the article is misleading.

Julia Mulligan is married to Councillor Patrick Mulligan (Conservative) from Craven District Council, who sits on the Panel. He declared an interest at the beginning of the meeting, stating that his wife Julia Mulligan is the chair of IDAS (which receives funding from North Yorkshire County Council, the City of York and the Police, Fire & Crime Commissioner’s Office).

During the meeting, Councillor Patrick Mulligan quoted the staff at the OPFCC criticising Commissioner Allott because they alleged he had taken credit for achievements that were actually due to the work of his predecessor (Councillor Mulligan’s wife, Julia). In my view, Councillor Patrick Mulligan should have declared an interest that the previous incumbent that he referred to in his question to PFCC Allott was indeed his wife. Commissioner Allott responded by pointing out that he had said he was building on the work of his predecessor.

In my opinion, Mrs Mulligan should not be using her husband – who is an elected official – as her stooge to put questions on her behalf to Commissioner Allott.

Nor should she have used him to draw attention to her own achievements during the meeting.

What is important now is that the work of the OPFCC carries on.

I was pleased to see that the Panel offered a vote of thanks to the OPFCC staff for carrying on under the very difficult circumstances they found themselves under.

It cannot have been easy working for Philip Allott, especially following on from having had to work for Julia Mulligan. Nevertheless the staff at the OPFCC did carry on and I salute them for this.

I hope, for everyone’s sake, that whoever is selected to be the next PFCC for North Yorkshire is someone that behaves normally for a change. By that I mean that he or she is not a bully, is not a misogynist, treats his or her staff with respect, communicates openly and does not supress journalists because they criticise him, or her, or the Police, and can manage a budget.

It should be said that both the PFCCs that North Yorkshire Conservatives selected since 2012 did not possess most or all of these basic requirements for the role.