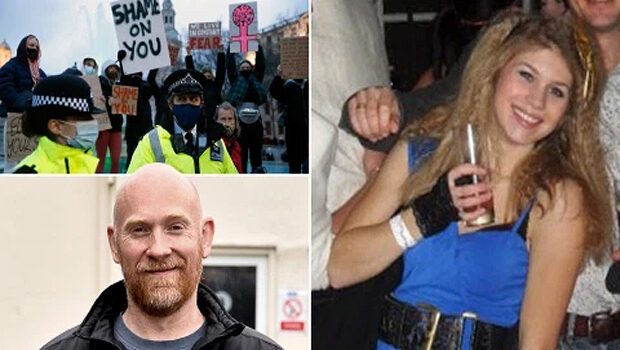 PC Wayne Couzens (pictured above left) was not detected as a predatory Police Officer, despite many warning signs. This allowed him to abduct, rape and murder Miss Sarah Everard (pictured above right).

A chronology of Couzens’ life has proved to be revealing.

Based on all the various reports in the media, I have identified twenty-two points of failure from 2002 onwards, by three Forces, which should have resulted in Couzens being dismissed as a Police Officer.

These are detailed in this spreadsheet, here:

The final incident (indecent exposure at a McDonalds in South East London) was committed on the 27th of February 2021, three days before Sarah’s murder. No action was taken by the time of his arrest on the 9th of March, indicating that in this case also, the investigation was bungled.

If other crimes by predatory Police Officers are to be prevented, it is essential that the media identifies the key failings in this case, and holds the police service to account for them. This article explores the key questions arising from this case.

How did Couzens pass the vetting to be a Special Constable with Kent Constabulary?

In 2002, Couzens was involved in an unidentified offence of a sexual nature. It appears that either it was not investigated, or it was not recorded in the PNC. So when the vetting check was made, nothing showed up.

Why did Couzens resign from Kent Constabulary in 2009?

Couzens served as a traffic officer in the Folkestone area, which gave him the opportunity to harass female motorists, in the same way as he did when stationed at Bromley. Is it possible that Couzens was discovered in some similar act of misconduct? Was he detected in the indecent exposure offence in 2008 against Emma Wilson or another sexual offence? Leading to him being told to resign from the Force or face prosecution.

How did Couzens pass the vetting to be an armed Officer with the CNC?

Couzens joined the CNC in 2011. He passed the initial CNC vetting because Kent Constabulary did not make any adverse comment about him and he had no convictions.

How did Couzens pass the vetting to transfer from the CNC to the Metropolitan Police in 2018?

The CNC has a higher initial vetting requirement than the Metropolitan Police, because all its Officers are armed and it operates in the nuclear industry. Had Couzens been vetted when he transferred to the Metropolitan Police, this should have revealed that he had an unsavoury reputation in the CNC and enormous debts amassed through his liaisons with prostitutes.

It therefore appears that either Couzens was not vetted, or that when he transferred the CNC did not reveal all that it knew, because it was relieved to see a bad apple transferred to another Force.

In December 2019, the NYE raised concerns about vetting of Police Officers. I quoted a 2018 Majesty’s Inspectorate of Constabulary and Fire & Rescue Services (HMICFRS) report as follows:

“We were surprised to find there’s no requirement to vet officers at point of transfer. Some police predators who get wind of the fact they’re about to be caught run and move from force to force. There’s no way of sharing intelligence between transfers.”

When Couzens transferred from the CNC to the Met, he left his unsavoury reputation at the CNC behind. A classic example of a cunning predator evading detection, as identified by HMICFRS above.

How did Couzens pass the enhanced vetting to be an armed Officer with the Metropolitan Police?

Couzens transferred to the Met as a firearms Officer on the understanding that he would go into the Parliamentary & Diplomatic Protection Command. At the time, there was a major recruitment drive and a shortage of firearms-trained Officers, so the vetting process was not being followed for all Officers. It appears he was not vetted because he was a firearms Officer transferred from the CNC.

After initial training, Couzens was stationed at Bromley Police Station in South East London. He had again developed an unsavoury reputation at Bromley, but no one reported his conduct either at the time, or on the transfer documentation.

He was therefore again able to escape disciplinary action by transferring into the Parliamentary and Diplomatic Protection Command.

Is Couzens a serial killer and/or serial rapist?

Couzens was a serial ‘flasher’. Indecent exposure is a crime that often leads on steadily to a higher level of offending. Serial rapist, murderer and suspected serial killer Mark Dixie is a classic example of how a murderer can go from indecent exposure, assault, rape and then attempted murder as a teenager, then downscale to indecent exposure in his 30’s, then commit further rapes and a murder.

A number of other informed commentators have opined that Couzens is probably a serial killer. Regular NYE contributor and retired Police Intelligence Officer Chris Clark has suggested, in the Daily Mirror, that Couzens was a ‘serial killer acting in clear sight’. Criminologist Professor David Wilson and Criminal Psychologist Dr David Holmes have both come to similar conclusions.

Couzens routinely took his handcuffs with him when he was off duty, even when walking his dog. This may have been so that he could launch opportunistic attacks on women.

Couzens served as a traffic Policeman in the Folkestone area and had a reputation at Bromley Police Station for picking on women motorists, obtaining their details, then watching their houses at night. It must be a concern that the reason he picked on lone female motorists was to intimidate them into having sex with him.

In some ways, Couzens’ behaviour is similar to the modus operandi of California Highway Patrol Officer and serial rapist George Gwaltney. Gwaltney deliberately pulled over attractive women driving on their own at night and bullied them into having sex with him. He was convicted of the abduction, rape and murder of Miss Robin Bishop. Documentary on the Federal Bureau of Investigation (FBI) investigation here. To this day, the FBI does not know how many women he raped or if he was responsible for other murders.

There is currently a major antecedent investigation by the Metropolitan Police into cold cases going back thirty years to identify if Couzens was responsible for any of them. The NYE will report back on this investigation in due course.

Is it only the Metropolitan Police that has a problem?

The answer to that question is clearly no. This issue goes across Forces. A few examples:

Was Couzens protected because he was a freemason?

The Daniel Morgan Independent Panel identified that a Detective Sergeant who had been accused of murdering Mr Morgan was a freemason and master of two lodges which had Police Officers as members. At least ten of the Police Officers who were investigating Mr Morgan’s murder were also freemasons and may have been socialising at the lodge with this suspect at the same time they were investigating him.

I am waiting for the Metropolitan Police to confirm if Couzens was a freemason. If he was, then it is inconceivable that his brother masons would inform on him and this may explain why he was able to carry on.

Was Couzens a security risk?

The answer to this question must undoubtedly be yes:

Couzens had access to all areas of the Houses of Parliament. He clearly posed a massive risk to females in the Palace of Westminster.

Couzens was violent towards women, unstable and had a gun. There may have been a wider risk of him becoming enraged and opening fire while on duty. In 1984, a Canadian Army Corporal with mental health problems opened fire in the Parliament Building in Quebec City killing three and wounding thirteen others.

Couzens was vulnerable to blackmail because of his offending and because he was in debt to an Eastern European organised crime syndicate for prostitutes. When initially questioned he stated that he had kidnapped Sarah Everard to resolve his money problems with an Eastern European organised crime gang. As an armed Policeman with the Met and the CNC he had the opportunity to steal documents and photocopy them, to sell on to a foreign intelligence service, or plant listening devices for a fee.

Could an Officer like Couzens exist in North Yorkshire Police (NYP)

The answer to that question is yes. There has already been one. I will cover this in my next article “Couzens and NYP”.

In summary, I think Couzens was not detected because: