CONNIE PEACH [Independent]: “The Person NOT The Party” 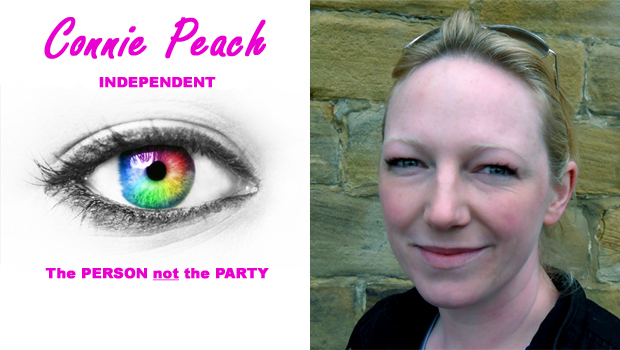 A Letter to the Editor from Connie PEACH of Whitby (who is contesting the Mulgrave ward of the Scarborough Borough Council local elections as an Independent), introducing herself to the Borough electorate.

I wish to introduce myself. My name is Connie Peach and I am standing as an independent candidate for Mulgrave Ward in the Scarborough Borough Council election.

My husband and I moved to Newholm in January last year. We moved into the home that my Dad renovated over ten years ago. We have a very lively English Springer Spaniel who keeps us both fit and entertained.

We both have careers in the NHS – our careers began over 14 years ago: my husband began his career by working as a hospital porter and he is now a nurse in primary care. I began my own career as a health care assistant before developing my role. Naturally, we are both passionate about, and protective of, the NHS and we are concerned about its future.

We are especially concerned about Whitby Hospital.

Recently, I have been spending time talking with local people on a range of issues including:

On these issues I have had personal communications with Councillors and Council Officers and I have spoken to other concerned townspeople that have done the same. It is apparent that many local people, myself included, have been greatly disappointed in the responses from our council representatives.

It seems that the real issues for the area have not been paid sufficient attention and our councillors have not engaged adequately with the public – this has led to increased feelings of frustration.

I believe that Councils should be transparent and keep the public informed of their activities.

The public must also be afforded the opportunity to voice their opinions, concerns and frustrations and be encouraged to be involved in local decision-making processes, should they wish to do so.

Local councils should be held accountable to the electors they serve and they should ensure that every penny of our money is spent wisely and on the things that matter to us. Above all, Councillors must protect and promote the interests of the area they serve without personal or political bias.

For these reasons, I have decided to stand in the local council elections as the candidate for Mulgrave Ward. Its time to care, time to vote for a Council that cares.

Vote for the PERSON, NOT the PARTY