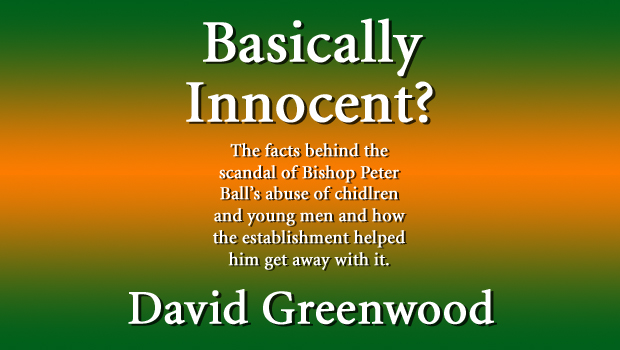 Tim Hicks reviews an important new book on sexual abuse in the clergy. As well as being an investigative journalist with experience in exposing paedophilism and a chartered accountant, Tim is also a practising Christian and a member of the Church of England.

“Basically Innocent?” is a book that investigates the Bishop Peter Ball scandal and the establishment cover up that was part of it.

Briefly, Bishop Peter Ball was a vicious, manipulative paedophile and fraudster, who preyed on vulnerable young men, using his office as a Bishop in the Church of England as a vehicle to facilitate his abusing. In 1993 he admitted an offence of indecent assault of one of his young monks Neil Todd, and accepted a police caution for it. In 2015 he was sentenced to 32 months imprisonment at the Old Bailey for two offences of indecent assault and an offence of Misconduct in Public Office which involved sexual offences against thirteen victims between 1977 and 1992 when he was the Bishop of Lewes. He served sixteen months in jail before he was released. He died in 2019.

The title of the book “Basically Innocent?” comes from a letter dated the 29th of September 1993 – written by the Archbishop of Canterbury George Carey to Bishop Peter Ball’s brother – also a Church of England Bishop. In it, he explained that he did not put Ball’s name on the Archbishop’s Lambeth List (a list preventing individuals from performing ministry and officiating at Church of England services) because, despite all the evidence, to the contrary:

“…in the end I believed him to be basically innocent.” 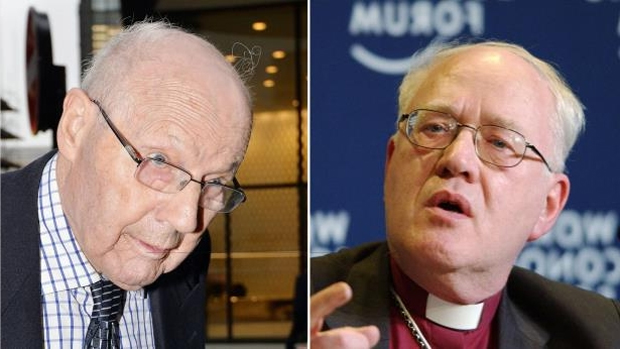 Bishop Peter Ball (Left) who used his position as a Bishop in the Church of England to abuse vulnerable young men and Archbishop of Canterbury George Carey (Right), who supported him throughout, withheld evidence from the police and transferred church funds to him.

The book starts with the sentencing remarks of His Honour Mr Justice Wilkie from Ball’s 2015 trial which succinctly describe the full range of his offending, the betrayal of the church, the planning, the manipulation and the impact on his victims. Most particularly on Neil Todd, who committed suicide in 2012 as a result of Ball’s abuse.

It goes on to use the evidence of some of Ball’s victims to describe the abuse they suffered from Ball. One victim relates how Ball used a twisted interpretation of the teachings of St Francis of Assisi to encourage nudity as a precursor to abuse. Twenty six of Ball’s victims came forward to the Independent Inquiry into Child Sexual Abuse (IICSA), but there were probably many, many more.

“We must hope the police will be effective in preventing any leak to the media about it. You consider whether it would be right to contact Imbert to try and ensure that the local police are aware of the catastrophic affect any news of a police enquiry at this stage, might have on Peter and the church”.

(Sir Peter Imbert was the Commissioner of the Metropolitan Police and the most senior and powerful police officer in the British Police Service). Imbert went on to contact the Chief Constable of Gloucestershire Police about the investigation at the request of Lard Carey. 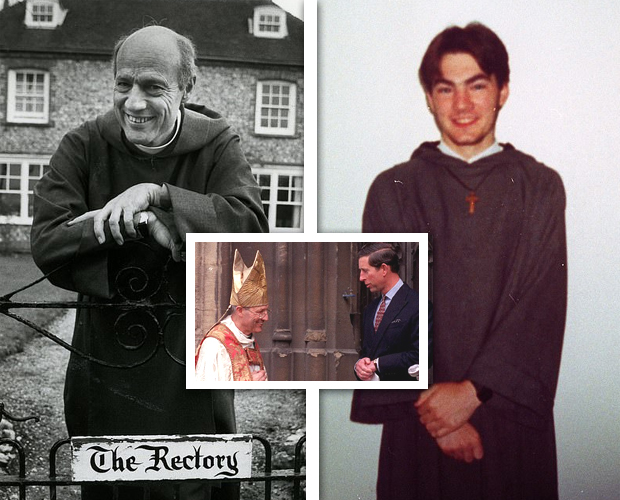 In summary, the book describes how there was a concerted effort to ensure that Ball was cautioned in 1992, not charged.

DI Murdoch was a particularly principled and capable officer and his investigation was without fear or favour. Despite all the pressure, he produced a 600-page report recommending that Ball be charged. In the event – incredibly – Ball was only cautioned. The author does not come to a conclusion on what effect establishment pressure and withholding the letters detailing further cases of abuse had on the CPS charging decision. But he does assert that these acts and others were clearly a misuse of influence and it must be a concern that it ensured that Ball was not charged, but let off with a caution.

The author sets out a damning chronology of how following the 1992 caution, George Carey the Archbishop of Canterbury supported Ball, despite clear evidence of his criminality. This support included his reintroduction to public ministry, where he would again have access to vulnerable boys. The church funds that Ball received from Archbishop Carey are also meticulously documented. Including the disability pension granted to Ball when he was cautioned, even though he started petitioning straight away to return to full ministry. The implication being that he was not ill or disabled and capable of full time working.

As with the more recent Jeffrey Eppstein scandal involving Prince Andrew, Prince Charles maintained contact with Ball providing him with money and accommodation. Even though he knew that Ball had accepted a caution for an offence of indecency and been retired over it.

It was only as a result of a separate investigation which discovered evidence of Ball’s offending in Chichester, that Sussex Police launched another investigation Operation Dunhill which was led by Detective Superintendent Carwyn Hughes. Like DI Murdoch, D Supt Hughes was another indefatigable detective who led a very skilful investigation that led to Ball finally being convicted and jailed. Sadly the news that the case against Ball was to be re-opened and he would again enter Neil Todd’s life caused him such distress, that he committed suicide in 2012.

In summary, the book sets out to show how:

“the establishment minimised the nature of Ball’s offending, tried to reduce the consequences for him and for the Church and harassed those who tried to complain against him”.

“This book will uncover, with direct evidence from the main protagonists, the sequence of events, who knew what and when.”

It does exactly that. It is an important work, incisively identifying everything that was wrong with the approach to sexual abuse by clergy within the Church of England.

The book is well written, easy to read, 99 pages long and can be obtained from the internet using the link below. Price £6.99.

The author, David Greenwood, is a solicitor specialising in child abuse cases and a partner at Switalskis, one of the leading firms in this area of law, heading up a specialist department. Greenwood’s reputation and that of his Department has spread throughout the country and now has a national reputation for high quality work in this field. It is because of this that I first came to know of him through my work on the NYE’s Peter Jaconelli, Jimmy Savile and Bishop Peter Ball investigations.

He represented a large number of the core participants at the Independent Inquiry into Child Sexual Abuse (IICSA). He also promotes good practice in the legal profession in this complex and sensitive area through the Association of Child Abuse Lawyers (ACAL). He is currently at the forefront of the investigation into Child Sexual Exploitation in the Rotherham area.

David Greenwood is also an executive member of Minister and Clergy Sexual Abuse Survivors (MACSAS), which assists survivors of church abuse to assert their rights.

I assisted David Greenwood with his submissions to the IICSA by investigating and documenting the church funds transferred to Ball by the Church of England. I feel that nevertheless I can write a dispassionate review of his book. Readers will have to draw their own conclusions as to whether I have achieved this or not.

Following the publication of “Basically Innocent?” the David Greenwood was quoted at length in the BBC documentary “The Church’s darkest secret”. It is a first class piece of investigative journalism that dispassionately and analyses the Peter Ball scandal. Part 1 can be viewed here; Part 2 can be viewed here. In my view, as a Christian, it should also be required viewing for all Church of England safeguarding officers, Bishops, Priests and Ordinands. Such was the impact of this documentary that the next day the Church of England issued a statement by the Right Reverend Rachel Treweek, Bishop of Gloucester on the Peter Ball scandal which can be seen here. In her statement, Bishop Rachel criticises the response of the Church of England to the Bishop Peter Ball scandal and admits that the Bishops involved and Archbishop Carey participated in a cover up to protect Ball and were more interested in protecting Ball and the reputation of the Church of England, than in the victims.

Having followed the case, then read the book and, in particular, having watched the documentary “The Church’s darkest secret”, I had feelings of admiration for the police officers in both Gloucestershire and Sussex Police who investigated Ball. According to DI Kate Wood (retired) quoted at 25 minutes and 37 minutes in “The church’s darkest secret” Ball should have been charged in 1992 and would have been convicted on the evidence available. Through no fault of the officers concerned, the 1992 Gloucestershire Police investigation was frustrated by the Church of England and others. So Ball was only cautioned instead of being convicted. Happily, Sussex Police were subsequently able to run a new investigation which eventually obtained a conviction and finally brought Ball to justice.

I know from my own experience as an auditor and journalist that large rank structured organisations will not investigate themselves impartially. Particularly if they have a public image to protect. I have no reason to believe the Church of England is any different. This BBC Panorama documentary, broadcast on the 29th of April 2019 concerning Operation Redstone an investigation into abusive clergy by Lincolnshire Police features victims who reported abuse and were ignored. Phil Johnson the Chair of MACSAS is quoted at 28 minutes, stating that the Church of England is not capable of policing itself and that allegations of misconduct should be investigated externally.

Certainly none of the figures in the Peter Ball cover-up have faced any action other than Archbishop Carey, who was ordered to resign as an honorary bishop. Essentially a slap on the wrist. He was not defrocked and continues to sit in the House of Lords.

NYE coverage of the Bishop Peter Ball scandal is here, and here. In these articles I support calls for a statutory offence of failing to report and investigate child abuse. If police officers, clergy, teachers, and social workers knew that they could face future prosecution for supressing evidence of child abuse, the stream of grooming and child sexual abuse scandals that have recently been uncovered would never have happened. This will be the next step forward in protecting children. See this NYE article on the Rochdale grooming scandal here.