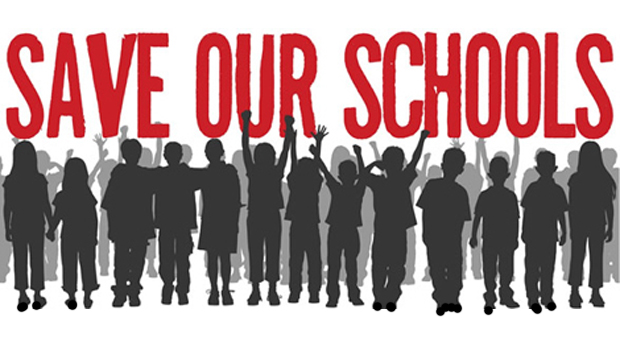 A Letter to the Editor from Tony RANDERSON who, as a County & Borough Councillor [Lab.] in Eastfield, has been attempting, via Scarborough & Whitby MP Robert GOODWILL [Con.] (in turn, via Secretary of State Nick GIBB [Con.]),  to secure assurances from the Tory government on the future level of funding for our schools.

Dear Editor,
Because I feel this is of some importance, could I bring the following to the attention of your readers? A couple of weeks or so ago, I wrote to Robert Goodwill, MP for the Scarborough and Whitby Constituency, for clarification on the Government’s proposals for schools funding. The response I received [see below] from the Minister of State for School Standards Nick Gibb MP leaves much to be desired and personally I fear for the future education of our children.

Thank you for your letter of 17 March, addressed to the Secretary of State, regarding the schools National Funding Formula. I am replying as the Minister of State for School Standards.

We have protected the core schools budget in real terms overall. This year, it is the largest ever on record, totalling over £40 billion. This is set to increase to £42 billion by 2019-20 as pupil numbers rise over the next two years.

The current funding system, however, is based on data that is a decade or more out of date and does not support our ambition for all children to be able to fulfil their potential and succeed in adult life. Similar local areas and schools receive very different levels of funding, with little or no justification. We are committed to introducing a national funding formula for schools in 2018-19, that will calculate schools’ funding allocations consistently and transparently,  using an up to date assessment of need.

Introducing a national funding formula is a major reform and we have consulted widely on our proposals. We have made available a significant amount of data to help schools, governors, local authorities and parents to understand the impact of the proposed formula, if it had been introduced in 2016-17. The illustrated figures can be found at : tinyurl.com/HLODTAL.

We are grateful to everyone who has taken time to highlight their views on school funding and the proposed formula as part of the formal consultation. We have received a significant number of responses, which we will review in detail. We will publish the Government’s response to the consultation in the summer.

We know that schools are facing increasing cost pressures. As in other public services, these pressures will include salary increases, the introduction of the National Living Wage, increases to employers National Insurance and pension scheme contributions, and the apprenticeship levy, this will support schools to train and development new and existing staff. This is an integral part of the Government’s wider plan to provide greater opportunities for everyone, regardless of their background, to enter the workplace.

We will continue to provide advice and support to schools to help them use their funding in cost effective ways, and improve the way they procure goods and services so that they get the best possible value for their pupils. We have published a wide range of tools and support to help schools, and these are available at tinyurl.com/HUTWG36.

Schools could save, on average, up to 10 per cent by making use of our national energy deal, and over 40 per cent by using the national deal for printers and photocopiers. There is also well established evidence, from the Education Endowment Foundation, of significant scope for better deployment of staff in schools. We have also launched a school buying strategy to support schools to save at least £1 billion by 2019-20 in non staffing costs. The strategy can be found at tinyurl.com/ ZJVJZDY.

This response is nothing more than lip service and this does not address the problems schools, such as those in Eastfield, will be immediately facing due to the draconian proposals to under-fund will inflict upon these schools. This response to my very genuine concerns is pure “gobbledygook” aimed at confusing citizens with a degree of fiction and not hard actual facts regarding the ramifications of these proposals with our children’s education suffering.

Funding per pupil in Eastfield Schools will be massively reduced, and many good teachers lost, if this proposal is implemented. This is disgraceful whilst those in more affluent areas of our County and Country will prosper. This is the Nasty Party at their nastiest. It is the Tory way to look after the minority at the expense of the majority. But this time it is our children, who are this country’s future, who could well be suffering at the hands of this Conservative Government

Yet on the Tory Election Leaflets for the County Council Elections  it states :

Typical Tory Policies that will damage the education of our children in areas such as Eastfield. We should ALL be crying foul at the top of our voices. We should all be showing our discontent with this government by way of the ballot boxes on May 4th and June 8th.
Yours, etc
Tony Randerson.