In the absence of any communication between the Scarborough Harbour Executive and the stakeholders/harbour users since 2019, perhaps it would be appropriate to share a news article published recently in the Yorkshire Post newspaper, announcing the retirement of the Borough Harbourmaster, Captain Ian Vasey.

In fact, Capt. Vasey oversaw one of the few SBC undertakings that generated a surplus of revenue for the taxpayer. Remember it was under his leadership that Scarborough Harbour department funded the new public toilets on Vincent Pier at a cost of £200,000.

In the past, harbour users have been known to put their hands in their pockets and show their appreciation of a good leader, as shown in the attached press cutting dated 1935, when the retiring harbourmaster was presented with a gold and silver cigarette case, after only six years service. 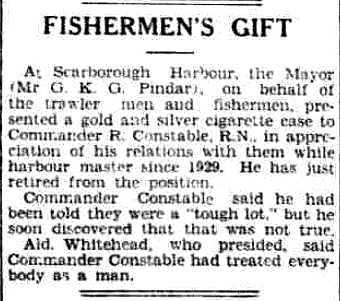 Surely, after 20 years of public service, the retirement of an Officer of the calibre of Capt. Vasey (who I have heard described as probably the best Harbourmaster that Scarborough has never seen) warranted a better acknowledgement than the article reproduced below?