A number of Enquirer readers have approached me on account of their concerns regarding the questionable legality of Scarborough Borough Council (SBC) drafting, printing and issuing documents purporting to be Court Summonses and/or Liability Orders.

A typical example of an SBC ‘Summons’ is shown here (I have redacted personal identifying details): 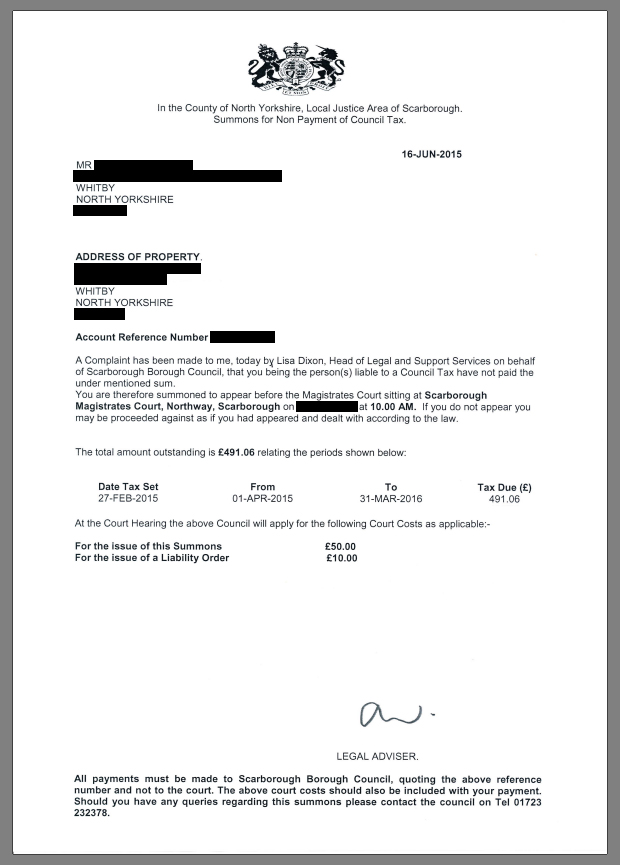 On reading the header, most recipients will conclude – quite mistakenly – that they are in receipt of a Court Summons. Careful examination shows that this is not the case.

The document shown above has been drafted, printed and issued by SBC, as one of a large batch, without individual reference to Scarborough Magistrates Court.

It is NOT a Court Summons. It is nothing more than a tentative invitation – one which, in my lay opinion, it would be very foolish to accept, for attendance may be taken to be consent to the ensuing proceedings.

There are many aspects of this which are significant, but I propose to concentrate on one that I regard as nothing less than a premeditated act of fraud.

I draw readers’ attention to the bottom part of the document: 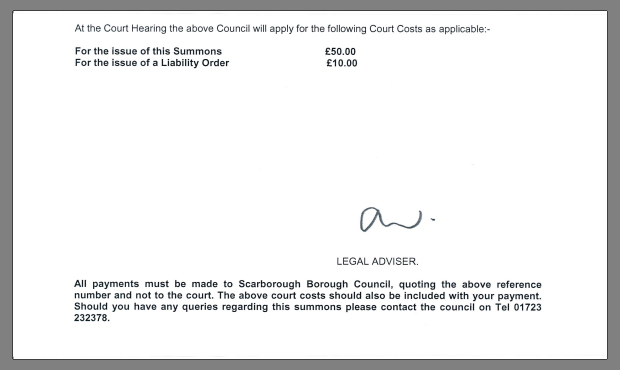 This clearly states that SBC is intent on demanding a payment of £60 (£50 “For the Issue of this Summons” and £10 “For the issue of a Liability Order”). Notice that payment must be made to Scarborough Borough Council – not to the Court. The penultimate sentence refers to “the above court costs”.  These payments are neither demanded by the Court nor paid to the Court. SBC is demanding payment for nothing more than drafting, printing and issuing worthless pieces of paper.

I repeat, the document above is NOT a Summons.

SBC does not possess legal authority to issue a Summons – or a Liability Order. (A Liability Order is an order issued by a Court granting the Council permission to commission a Bailiff to recover goods and/or other assets from a debtor).

Only a Court can issue a Summons.

Only a Court can issue a Liability Order.

Scarborough Borough Council is not a Court.

Summonses and/or Liability Orders must bear the printed name and wet-signature of a Justice of the Peace or the Clerk of the Court.

I apologise to readers for labouring this point, but it is of vital importance to low-income citizens who have already struggled, and failed, to meet their Council Tax payments in a timely manner.

These are the people who are least able to withstand being conned out of an extra £60.

For the doubters who think my interpretation is erroneous, the Ministry of Justice has confirmed, in Freedom of Information response FOI81527, that:

But the example ‘Summons’ (shown above) was not issued by the Court; it was drafted, printed and issued by SBC.

This accords with Rule 99 of the Magistrates’ Courts Rules 1981, which  provides that Summonses must be issued by a Justice of the Peace (i.e. a Magistrate) – though it may be served by virtually anyone.

To be absolutely clear, Scarborough Borough Council (or any other of the nation’s 326 Billing Authorities) is not a Justice of the Peace (Magistrate). 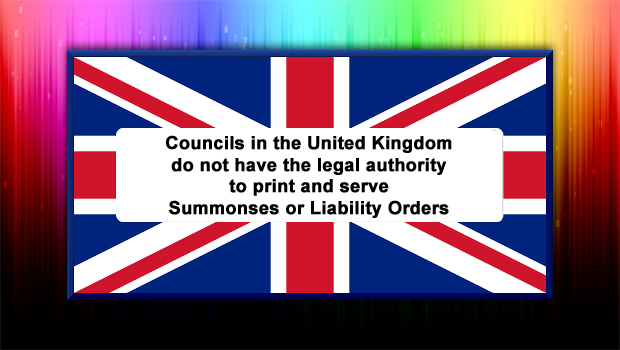 However, the ‘Summons’ shown above is clearly intended to be understood as a true Summons, with the purpose of coercing recipients into attending a ‘hearing’ held at Scarborough Magistrates Court. But this would-be ‘hearing’ is not a bone fide Court Hearing – it is nothing more than a meeting held in a room at the Court ‘borrowed’ (or hired) by Scarborough Borough Council, where the recipient will be led to believe that any resolution imposed upon her/him amounts to a bona fide Court Order – which it does not.

It is no exaggeration to characterise this Council ‘procedure’ as a mere artifice by means of which the Council is pretending to act under the authority of the Court.

This is illegal. It is a criminal offence.

Pursuant to such ‘Summonses’, approximately three million Liability Orders each year are drafted, printed and issued by Councils in England and Wales. Make no mistake, this ‘Summons’ caper is big business.

One can only speculate about the identity of the hapless human being who inscribed that indecipherable spermatozoön–like squiggle above the words ‘LEGAL ADVISOR’ on the SBC ‘Summons’ (shown above). Has she/he considered the prospect of a term of imprisonment not exceeding 7 years for “falsely pretending to act under authority of court”? Is she/he content to rely on the Nuremberg Defence – “I was just following orders”?

Of course, considering the huge number of ‘Summonses’ of this sort that SBC has ‘issued’ on the authority of that squiggle, she/he may do well to be particularly mindful of the final phrase “and shall for each offence be liable on conviction to imprisonment for a term not exceeding 7 years “.

It is also instructive to examine case law pertaining to this issue, the most relevant case being Regina v Brentford ex parte Catlin, in which Lord Chief Justice John Passmore WIDGERY – Baron WIDGERY, no less – summed up as follows:

But can anyone really imagine a Constable of the North Yorkshire Police investigating ‘without fear of favour’ – much less actually charging – an employee of the Borough Council or a Justice of the Peace or a Clerk to the Magistrates? Hardly.

Of course, it is the duty of the Serious Fraud Office to investigate and prosecute cases in which there is (a) a very significant public interest, or (b) in which a new species of fraud has been perpetrated. Good luck with that.

We are all equal under the law, right? Sure – except those who are above it.

I would like to believe that Opposition Councillors, especially in the more needy wards, will wish to take up these issues with the Director of Legal & Support Services Mrs Lisa DIXON – the lady who poses as the Complainant in these ‘Summonses’ – who will (no doubt) produce an explanation (of sorts) for why black may be regarded as white. Her explanation is predestined to be regarded with great skepticism, in consequence of her track-record, including (but not limited to) her utterly disingenuous statement to BBC ‘Inside Out’ documentary presenter Chris JACKSON.

You have it in one; she lied:

Meanwhile, I hope readers will be  asking their Councillors how they feel, learning that the Council that they have been so proud to serve indulges in such cheap trickery, implied threats and blatant misrepresentation in order to squeeze an extra £60 out of precisely those residents who are already fighting a losing battle to meet their extortionate Council Tax bills.

The implied threat of the Bailiffs invading their homes to haul off goods and chattels (which, by the way, cost them far more than the paltry return to be expected at public auction) is bound to visit unimaginable anxiety and distress on the poor recipients of these ‘Summonses’ – a level of anxiety and distress that any “reasonable person” would recognise as meeting the standard required by the Protection from Harassment Act 1997.

Finally, I direct readers to Whitby Town (Parish) Councillor Richard INESON’s most instructive Letter to the Editor of the North Yorks Enquirer – “Council Tax: An SBC Mystery” – demonstrating the fact that residents in Whitby, Scarborough and Filey are plagued by comparatively the most expensive Council Tax in the country.

With SBC, it is always about the money.

With SBC, it is only about the money.

How else will they underwrite their disastrous entrepreneurial adventures?

“Judge rules in favour of retired vicar who claimed Haringey council in London was wrongly adding costs to legal bills for non-payment of council tax” – The Guardian, 06/05/15.