In accordance with this policy, this article is part of a series of articles on Chief Police Officers’ expenses and the various financial issues that have caused public concern in North Yorkshire Police (NYP) since 2006 to the present day. They are in the public interest, being intended to raise awareness of this issue, improve financial control and accountability over the use of police funds.

Recently, I wrote two articles on the on-going failures in financial control in NYP and the Office of the Police Fire, & Crime Commissioner for North Yorkshire (OPFCCNY):

In these articles I asked for explanations for the following issues: 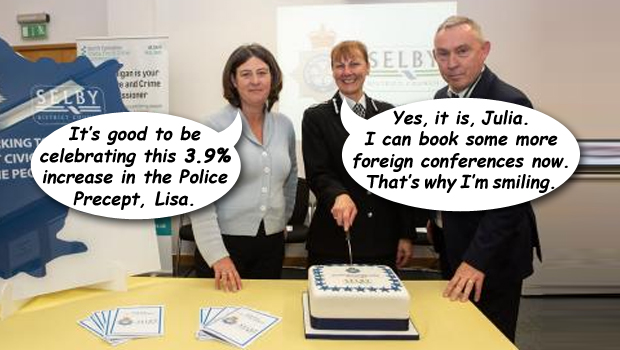 I wish to emphasise that I am not alleging that there has been any impropriety or misuse of public funds in these articles. The issues I am raising are of disclosure, value for money, transparency, accountability and financial control over public funds.

I sent Commissioner Metcalfe copies of the above two articles, asked her to justify the expenditure and to reform the way expenses are paid and disclosed by NYP and the OPFCCNY, so that they both comply with normal standards of financial control, the higher standards set by other forces and the applicable regulations.

More controversially, I asked that the above individuals were contacted and if they could not provide a satisfactory explanation for the expenditure, they were asked to pay it back. (As PFCC Mulligan did with Chief Constable Maxwell and DCC Briggs in similar circumstances).

I also asked for permission to publish the Witness Statements to the High Court submitted by officers and employees of NYP as part of its bungled attempt to prosecute NYE journalists for harassment, so the NYE’s readership to consider if Operation Hyson represented good value for money and was properly authorised.

I received a very strange reply, not from Commissioner Metcalfe, but from the Chief Executive and Monitoring Officer of the OPFCCNY, Mr Simon Dennis. It was received after the articles had gone for publication, but in accordance with Mr Dennis’s wishes, I am now publishing it in full. 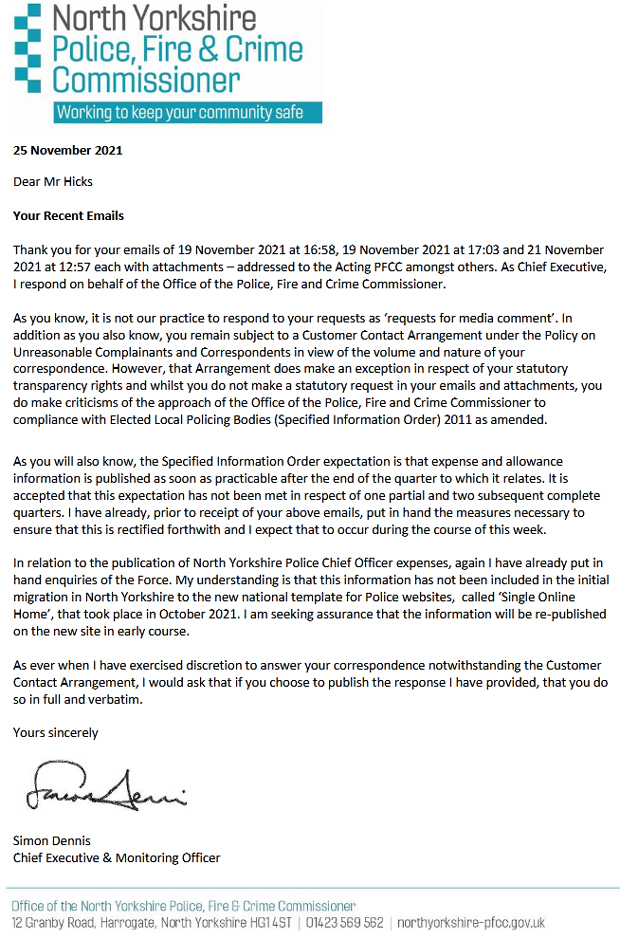 In his letter, Mr Dennis states:

“As Chief Executive, I respond on behalf of the Office of the Police, Fire and Crime Commissioner.”

Despite this, Mr Dennis confirms that the OPFCCNY will not respond to requests for media comment from the NYE and that I have been made subject to a Customer Contact Arrangement to justify this. No other Crime Commissioner in the country that I am aware of follows a similar policy of proscribing a local media organisation.

I assert the OPFCC has adopted this policy because it resents legitimate media scrutiny and this policy is part of an ongoing strategy of media suppression, commenced in retaliation for legitimate criticism of successive Commissioners and NYP. My articles above are classic examples of this.

This policy is obviously intended to deny the NYE’s readers access to information that they are entitled to receive. Mr Dennis’s letter of the 25th is a perfect example of this. He has not commented on the fact that all the Chief Officer’s and PFCC’s expenses from 2013 and 2016 respectively were paid without adequate disclosure of what purpose the expenditure was for. He has also ignored the concerns I raised about Ms Carter, DCC Madgwick and Chief Constable Winward’s expenditure specified above. He has preferred instead to use the contact arrangement to pick and choose what he will respond to and which issues he will withhold any explanation for.

A very clear cut example of stone walling by the OPFCCNY’s functionaries to evade legitimate scrutiny by the media and to supress criticism of them.

The role of the Commissioner

The long-suffering taxpayers of North Yorkshire have an absolute right to know what Chief Officers and the Commissioners have spent their money on. They also have a right to expect that payment of expenses is subject to effective disclosure and strict financial control.

Yet NYP Chief Officer’s expenses and the PFCC’s expenses are still not disclosed with sufficient information to make them meaningful. No other police force in the UK that I am aware of does not fully disclose these expenses.

Mr Dennis’s letter (above) uses the OPFCCNY’s policy of proscribing the NYE, to evade facing up to the very real issues of misuse of public funds and failure of financial control the NYE is exposing in NYP and the OPFCCNY.

This demonstrates that the OPFCCNY resists public scrutiny, accountability and financial control, and that the Commissioner (who is responsible for holding the police and the OPFCCNY to account) acquiesces to this.

Commissioner Metcalfe – the person tasked with holding them to account – was provided with a draft of this article and invited to comment, but in accordance with the proscription policy did not. Nor did she answer the ten questions above. This is particularly concerning given the Oath of Office she swore when she was appointed Commissioner (selected extract of relevant passages below) requires her to respond to my enquiries and address the issues I have raised:

I will take all steps within my power to ensure transparency of my decisions and all areas of my work, so that I may be properly held to account by the public:

Holders of public office should act only in the public interest.

They should not do so in order to gain financial or other benefits for themselves, their family or their friends.

Holders of public office are accountable to the public for their decisions and actions and must cooperate with all appropriate scrutiny.

Holders of public office should be as open as possible about all the decisions and actions they take.

They should explain all decisions and withhold information only where it is clearly in the wider public interest.

Holders of public office should demonstrate these principles in their own behaviour. They should actively promote and robustly support the principles and be willing to challenge poor behaviour wherever it occurs.

It appears Commissioner Metcalfe is refusing to apply the above principles to Chief Officer’s expenses.

The role of the media

I have no doubt that if these issues had occurred in the private sector, say in a bank or a retail chain, there would have been an investigation and appropriate procedures would have been put in place to protect shareholders funds. However, it appears that because this situation relates to a public body and it is only tax payer’s money that is involved, Commissioner Metcalfe accepts a very much lower standard of financial control.

This demonstrates the importance of powerful public bodies being subjected to relentless ongoing scrutiny by a free press.

I have no doubt that if the NYE avoided covering controversial topics that the OPFCCNY did not want discussed, it would be off the OPFCCNY’s proscribed list in a flash. However, that is not journalism and it is not what the NYE is about.

The NYE will continue to uphold the public interest by holding Commissioner Metcalfe and Chief Constable Winward to account.

If you are mentioned in this article and do not agree with the views expressed in it, or if you wish to correct any factual inaccuracy, please let me know using the letters@nyenquirer.uk email address and your views and a correction will be published, if appropriate.