Regretfully, because of the overwhelming imperative to provide detailed coverage the SBC elections, this article, which should have gone out on the 3rd of May, has been delayed.

Remember the dead, fight for the living.

World Press Freedom Day was proclaimed by the UN General Assembly in December 1993.

Since then, the 3rd of May, is celebrated worldwide as World Press Freedom Day.

In the wake of the murder of journalist Lyra McKee pictured above, the National Union of Journalists (NUJ) is paying tribute to Lyra’s life and work at an event to mark World Press Freedom Day at the Free Word Centre.

Lyra McKee was shot and fatally wounded by an IRA gunman while covering a riot in Londonderry.

The motion was tabled on 23 April and has been signed by 31 MPs, please check if your local MP has signed up and if not then contact them to ask for their support.

“That this House mourns the death of Lyra McKee, murdered on Thursday 18 April 2019 by dissident republican terrorists in the course of her work reporting as an investigative journalist; recognises the profound shock and sympathy that greeted this news right across the community; notes that the killing is a devastating blow to Lyra’s partner and family, to her many friends and colleagues throughout the National Union of Journalists; commends the bravery of journalists across the world in risking their own safety to serve the public with their reports; notes that last year 95 journalists and media professionals lost their lives in targeted killings, bomb attacks or crossfire incidents worldwide; and calls for those responsible for murdering Lyra to be brought to justice, and reasserts the vital importance of preserving peace in Northern Ireland.”

The importance of press freedom in a democratic society

“Journalists and other media actors in Europe are increasingly being harassed, intimidated, deprived of their liberty, physically attacked and even killed because of their investigative work, opinions or reporting.This alarming situation is not exclusively limited to professional journalists and other traditional media actors. …the scope of media actors has enlarged as a result of new forms of media in the digital age. Those at risk also include others who contribute to inform the public debate and persons performing journalistic activity or public watchdog functions.

A favourable environment for public debate requires States to refrain from judicial intimidation by restricting the right of individuals to disclose information of public interest through arbitrary or disproportionate application of the law, in particular the criminal law provisions relating to defamation, national security or terrorism. The arbitrary use of laws creates a chilling effect on the exercise of the right to impart information and ideas, and leads to self-censorship. Furthermore, prompt and free access to information as the general rule and strong protection of journalists’ sources are essential for the proper exercise of journalism, in particular in respect of investigative journalism.

Surveillance of journalists and other media actors, and the tracking of their online activities, can endanger the legitimate exercise of freedom of expression if carried out without the necessary safeguards and can even threaten the safety of the persons concerned. It can also undermine the protection of journalists’ sources.”

The role of the NUJ in protecting journalists

The NYE has done what it can to raise the issue of attacks on journalists. See my article on the brutal murder of Daphne Caruana Galizia. The NYE also raises issues of press freedom as far as it can for a small internet news magazine in North Yorkshire.

However, the major effort in protecting journalists in the UK has come from the NUJ, of which I am a member. It has always championed press freedom and intervened to protect journalists that are being harassed. A prominent current example is the case of Irish journalists Trevor Birney and Barry McCaffrey:

On the 31st of 31 August 2018 two Belfast-based investigative journalists and NUJ members, Trevor Birney and Barry McCaffrey, were arrested in connection with the alleged theft of a confidential report from the office of the Police Ombudsman for Northern Ireland. The leaked unredacted report was sent to the journalists by an anonymous source (McCaffrey received a plain envelope in the post with no return address).

The document relates to the first police investigation into the killing of six men in Loughinisland, Northern Ireland in 1994 and the document features in the film No Stone Unturned.

This award-winning documentary tells the story of the victims and their families. It also examines the police investigation into the murders – for which no one has yet been charged. Furthermore, the film names the murder suspects and highlights allegations of collusion between the police and the gunmen.

When Trevor Birney and Barry McCaffrey were arrested, they were questioned for 14 hours and their homes and office were raided by the police. The journalists remain on pre-charge bail and must report back to the PSNI in September 2019 (by which time they will have been on bail for more than a year).

Trevor and Barry have won permission to challenge the legality of the search warrants and the High Court in Belfast has granted a judicial review.

You can watch the film trailer online. The full film is available to rent for £1 or buy online via itunes or Amazon Prime. You can learn about the case by listening to this Guardian podcast.

Attacks on journalists and freedom of speech take many forms. They are not confined simply to assassination or arrest.

Nor are they confined to mainstream journalists from television and the print media.

In 2018, following correspondence to me from NYP Chief Constable Lisa Winward, the NUJ wrote to her raising my case and its concerns over her media policy towards me, which it considered had major implications for UK journalism. This is to be covered in a forthcoming article.

The NYE has covered many scandals in its time. The NYE team exposed the disgraceful role that North Yorkshire Police played in the Jimmy Savile scandal and its failure to arrest Scarborough Borough Councillor and Mayor Peter Jaconelli. BBC Inside Out documentary with NYE journalists here, NYP statement here, NYP Spokesperson admitting that NYP had failed to investigate Saville and Jaconelli here. This seems to have cemented our relationship with SBC and NYP.

Below are a few examples of the type of behaviour the NYE has been subjected to which are criticised in the “Declaration on the protection of journalism and safety of journalists and other media actors”:

This demonstrates the full range of techniques that can be brought to bear against local community journalists by state actors with unlimited public funding, who have a self-interest in preventing legitimate scrutiny. It is important that there is a vibrant free press and that all attempts to stifle it by powerful interest groups must be opposed. 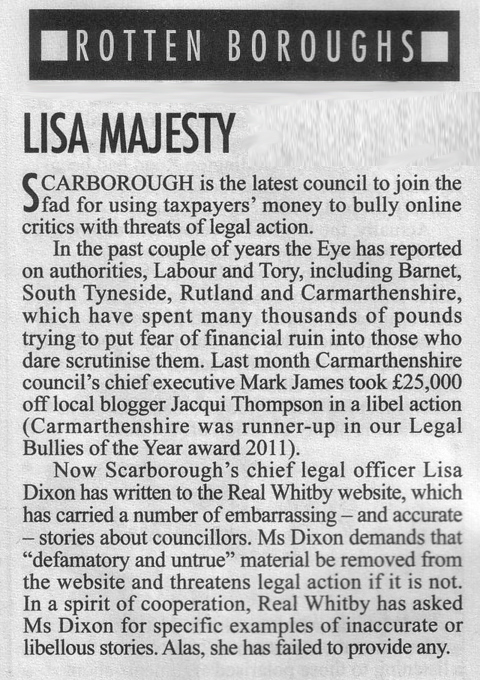 The IFJ safety fund is a lifeline for journalists facing violence, persecution and threat or needing medical treatment. It is a shining example of journalist to journalist solidarity. It is the only fund of its kind and provides immediate relief to those in danger and need around the world. The Safety Fund offers financial assistance in a range of emergency cases such as threats, violence and threats thereof, prosecution, settlement in exile and illness. Donations can be made online via the IFJ website.