This article is the first of two articles covering standards of financial control over Police funds from 2005 to the present day.

It is part of a series of articles on Chief Police Officers expenses and the various financial issues that have caused public concern in North Yorkshire Police (NYP) since 2006 to the present day. They are in the public interest, being intended to improve financial control and accountability over the use of police funds.

They lead up to an article that will try to assess the total cost of these issues to the North Yorkshire Taxpayer since that date.

At the time North Yorkshire MP Phil Willis, the Liberal Democrat MP for Harrogate and Knaresborough, said Director of Finance Paul Adams had been made a “scapegoat” following a damning auditor’s report and Police Authority Chairwoman County Councillor Jane Kenyon (known to NYE readers as “Miss X” from her role in the Poulson scandal) should now quit her job. He said:

The North Yorkshire Police Authority was the predecessor body prior to the creation of the current Police, Fire & Crime Commissioner for North Yorkshire.

In May 2013, Ms Carter was promoted to Chief Executive Officer to the Police & Crime Commissioner for North Yorkshire before going on long-term sick leave on the 29th of February 2016. She retired on the grounds of ill-health on the 28th of February 2018.

Ms Carter is pictured above at the former NYP Force Headquarters at Newby Wiske Hall with the disgraced former Chief Constable Grahame Maxwell. (Chief Constable Maxwell’s contract was not renewed in May 2012 after he admitted gross misconduct over allegations of nepotism).

During Ms Carter’s term as NYP CFO from 2006 to 2013 NYP was mired with controversy and failures in financial control:

“Such allowances are not unfamiliar in policing, or indeed many other avenues of business, and they are seen to be quite reasonable in the circumstances of employment of senior professionals.”

Well, put simply, that is a lie. Payments to senior executives cannot be exempted from audit or accounting. The Office of the Police, Fire & Crime Commissioner subsequently confirmed there was no basis for these payments.

DCC Briggs retired from NYP in 2011 following an IPCC investigation into his allowances, allegations of nepotism and material found on a computer disc.

The Finance function in any organisation is a control function that is responsible for imposing the highest standards of financial control over the employees at all levels; particularly over pay and expenses.

It also requires that the Department set an appropriate example to the rest of the organisation – and that starts from the top: Ms Carter. This is not just a nicety; it is also a fundamental requirement of the Nolan Principles of Standards in Public Life.

Chief Officer’s expenses (including senior civilian staff) are published to ensure openness and transparency. However, it transpires that while Ms Carter was NYP’s Chief Financial Officer, she occasionally claimed expenses without disclosing what they were for. When I e mailed Ms Carter asking her questions about her expenses, she simply ignored my correspondence. 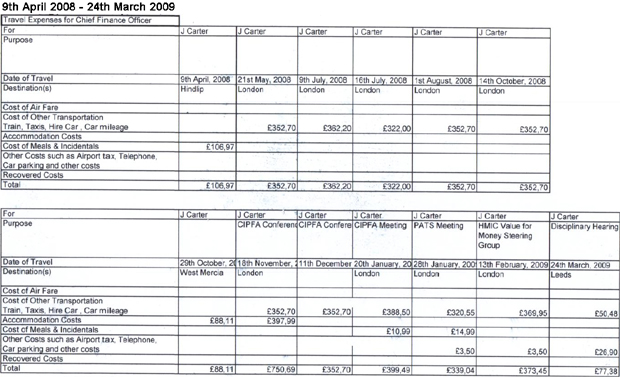 In my opinion, without full disclosure these payments should not have been made, but they nevertheless were.

Ms Carter’s expenses claims when she was Chief Executive to the Police & Crime Commissioner, 2013 – 2016.

As Chief Executive, Ms Carter presided over the introduction a new format for expense claims which no longer has that inconvenient category “Purpose” requiring the claimant to justify the expenditure. It is therefore impossible to tell whether the money was spent on bona fides expenses, or inadmissible expenditure like junkets to the Edinburgh Tattoo.

This effectively allows Chief Officers to charge whatever they please, without being open and transparent, or being held to account.

On a separate issue, Ms Carter also submitted an expense claim in March 2016, when she was on sick leave, for a trip to Bristol. Because the purpose of this visit is not disclosed, it is impossible to identify what this expenditure is for.

I would also comment in passing that Ms Carter conveniently neglected to disclose that she was ignoring my enquiries on her expenses, when she authorised the release of hundreds of thousands of pounds of public funds to finance civil legal action against me and Nigel Ward to obtain – amongst other things – an injunction, restricting my ability to comment on NYP.

This of course would have made it impossible for me to pursue my investigations into Chief Officer’s expenses. Including her own.

The requirement for high standards of financial control, openness and accountability over the use of Police funds, and the role of the media in ensuring this

The wider issue raised in this article is the requirement for the Police to be open and accountable for the use of public funds.

The above failures took place at a time when we were told that North Yorkshire Police was under financial strain and was making police officers and civilian staff redundant.

Her publicly disclosed expense claims above, show that she was apparently being paid expenses without stating what they were for. The same as the ‘personal development and healthcare’ payments to Chief Constable Maxwell and DCC Briggs. A classic failure of financial control.

Ms Carter was responsible for ensuring there was financial control and transparency over police funds and it is clear that there were multiple and inexcusable examples of failure of financial control in this period. The impression is of an organisation that resists public scrutiny, accountability and financial control, which is run for the benefit of Chief Officers.

How can this be consistent with the need to be open and accountable for public money?

Why can’t North Yorkshire taxpayers have the same standards of openness and accountability that WYP provides?

The NYE’s readership has an absolute right to know what this expenditure was for and that payment of expenses by NYP is subject to effective financial control. Journalists have a duty to investigate this on their behalf.

From a practical perspective, when DCC Briggs and Chief Constable Maxwell received allowances they were not entitled to, they were both asked to repay them. Ms Carter can also be asked to repay the taxpayers money she received for these undefined unaccountable expenses.

Hence the reason I am continuing to raise these matters in this series of articles.

Chief Constable Winward and Commissioner Newberry were provided with a draft of this article and asked to forward it to DCC Madgwick (Retired) and Ms Carter. They were all offered the opportunity of commenting on the article for publication. No response was received from any of them by the time the article was sent for publication.