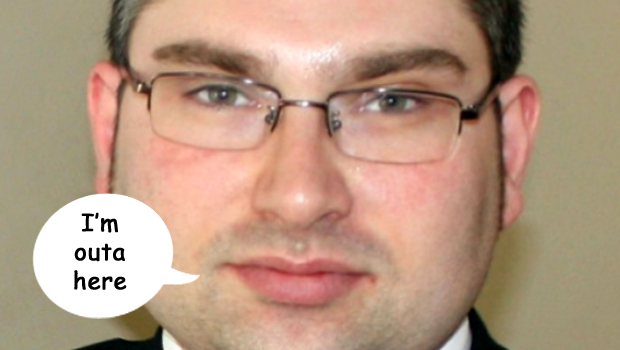 City of York Council (CYC) Leader Councillor James ALEXANDER has tonight (Wednesday 19th November 2014) stepped down from both the Leadership of the Council and as Leader of the Labour Group, announcing that he will be leaving the Council entirely at the May 2015 elections. Some observers discerned that it was a somewhat stage-managed ‘impromptu’ resignation.

Councillor James ALEXANDER has been at the centre of some acrimonious exchanges recently, notably over the Lendal Bridge fiasco and the alleged ‘altercation’ with CYC Legal Officer Andy DOCHERTY:

He is apparently to take up a new position accompanying Ed MILLIBAND in his quest for political obscurity.

I have relished the opportunity York people and the Labour Party have given me in electing me twice to serve Holgate ward and then to lead this great city over the past three and a half years. I have lived in York all my adult life, this is my home and it is an honour to lead the city in which I am raising my family.

People who know me know that I give everything I can to my work and the Labour movement. But the long hours, pressure of grappling with government cuts and personalised politics has taken its toll on me and my family. It is also widely acknowledged that the last few years have been a most difficult time for all council leaders.

Despite recently receiving unanimous support in the Labour Group to continue and a part of me wanting to go on, I cannot fully commit to another four years. My new policy role at the national Labour Party is an opportunity I could not turn down.

I am proud of what Labour has achieved under my leadership since 2011, to turn a city in stagnation onto the path to prosperity. Under my leadership we showcased York to the world by bringing the Tour De France here. We have helped reduce unemployment to record levels, outperforming national figures, bringing businesses like John Lewis and Hiscox. The city has seen Terry’s, the Bonding Warehouse and the White Swan developed.

The Network Rail training centre has been the first major development on York Central in a generation and we can look forward to further developments coming to fruition. This I believe reflects a new confidence in investing in York. We have seen the long overdue refurbishment of the city centre and significant progress on the Community Stadium project.

Under my leadership the council has helped ensure that, despite the unprecedented cuts forced upon us by the Government, no library, swimming pool or children’s centre has closed in York and in particular we have maintained some of the highest performing schools in the country. The same cannot be said at other councils across the country. The job of protecting public services is going to be harder for my successor as further cuts begin to bite.

We have paved the way for the fastest internet connections in the country coming to York and have introduced city centre wi-fi. We built two new park and rides as well as much needed new council homes. As an outcome of York’s Fairness Commission York was the first Yorkshire local authority to pay the Living Wage, helping 900 of our lowest paid staff.

We modernised the council by introducing the webcasting of council meetings and the council relocating to West Offices saves £17million over 25 years. As leader it has been an honour to have met so many residents, volunteers, carers, businesses and community leaders. In particular I have learned a lot from the Community Conversations I have held in every community in York over the last year. Residents have expressed to me their frustration with cuts but also their hopes for the future of York. I am particularly proud that under my leadership York has become a more welcoming place for our LGBT community.

The next Leader of the Labour Group will have my full support. I’m confident they will be elected again with a strong mandate and an overall majority to run the council in May.

As I leave office I want to thank residents, council staff, senior management and my Labour Party colleagues for their support. I would especially like to thank the residents of Holgate for putting their faith in me, so much so that they re-elected me with the most votes of any Labour councillor at the last local elections.

The experience has been humbling.

I also want to thank my family for putting up with me during this tumultuous period of my life. My family has helped me learn that there is more to life than politics. I often remind myself it isn’t very often that a working class son of a single parent dinner lady, with no political connections, who started work as a temp at the council, becomes Leader.

It is time for me to close this chapter in my life and open up a new one, with a new set of challenges. No longer being Leader will help me gain a better sense of priorities and allow me to pursue other interests whilst I am both young and idealistic enough.

I want to live in a society where a person’s talents and hard work will determine where they get to in life and not the reverse. This is why I am in politics and I have not forgotten this ideal.