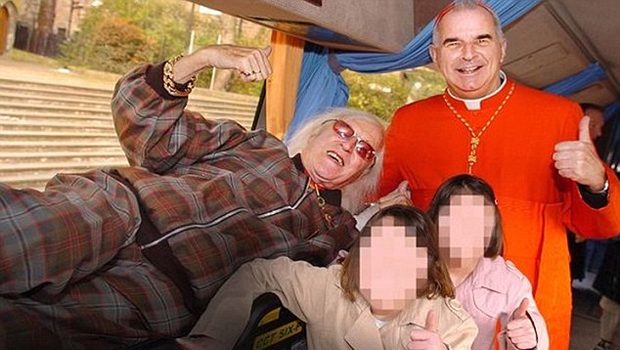 Regular and long-term readers of the North Yorks Enquirer will be aware of the prominent part played by myself and co-contributor Tim HICKS in the exposure of the predatory paedophile and former Scarborough Mayor, Councillor and Alderman, Peter JACONELLI [Con.] and his close association and serial co-offending with Jimmy SAVILE.

Simply by typing those names (individually or together) into the search box at the top right of this page, the whole story can be accessed in reverse chronological order. Our investigations culminated in a grudging acknowledgement by the North Yorkshire Police that our allegations were true. I suspect that we are not forgiven.

Following my FOIA request to the CPS, it finally emerged that lifelong predatory paedophile Peter JACONELLI had been charged in his Mayoral year (1972), but the Director of Public Prosecutions, distinguished Freemason Sir Norman SKELHORN K.B.E., Q.C., chose not to proceed. A review of the following article will serve to place the thrust of this present piece in a historical context:

Turning now to recent reports emanating from Ampleforth College in North Yorkshire regarding a series of allegations of sexual abuse at the prestigious school over a period of several decades, most readers will be aware that, beginning on 24th August 2016, Andrew NORFOLK, Chief Investigative Reporter at The Times newspaper (and formerly, long ago, a junior reporter at the Scarborough Evening News), published a series of articles breaking a new twist in the Ampleforth story:

Readers may recall that it was Andrew NORFOLK who broke the Rotherham child sex abuse scandal.

In broad strokes, Andrew NORFOLK is reporting that the sexual abuse of pupils at the College has been a long-concealed but very persistent problem, and that the North Yorkshire Police (NYP) has not covered itself in glory in the pursuit of its investigations. Ding, ding – a familiar ring.

The following report, 27th April 1996, appears to have escaped the attention of the mainstream press: 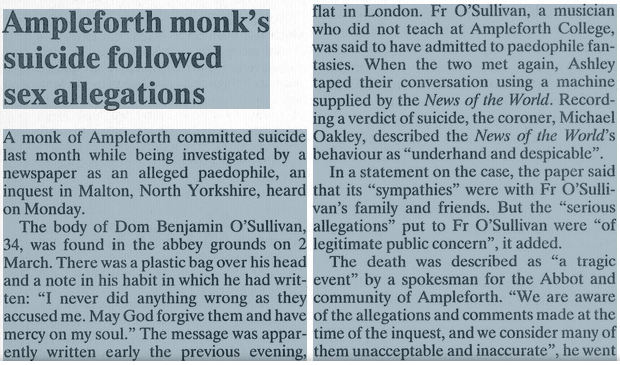 Back in 2005, when the present (until earlier this week) Abbot of Ampleforth Father Cuthbert MADDEN* (the eponymous MADDEN [* see title] – NOT the similarly-named Thomas HARDY novel) was elected to his first eight year term of office, the College endured a wave of damaging publicity. This Independent article tells the tale:

Bringing things up to date, the Daily Mail published the following article on 1st September 2016:

This was followed, the very next day, by this:

Abbot Cuthbert MADDEN’s fall from grace coincides with what appeared, at first sight, to be an unrelated piece of information passed to me, via social media, by a former pupil of Ampleforth College (and its nearby affiliated prep school St Martin’s Ampleforth) in the 1960s and early 1970s:

All this follows hard on the heels of the resignation, in June 2016, of the College’s first lay headmaster David LAMBON after a tenure of just less than two years. Most unusually, Mr David LAMBON (pictured below), whose reputation is that of a reformer, offered no explanation for his unexpected departure. It is not suggested that Mr LAMBON was in any way associated with CSA at the College.

On the face of it, any similarity with the SAVILE/JACONELLI saga would appear to extend no further than the questionable degree of diligence exercised by the NYP in its various CSA investigations.

Nevertheless, readers should be forgiven for wondering what other connections between the SAVILE/JACONELLI child abuse offences and those at Ampleforth College are about to emerge, beyond the fact that both SAVILE and JACONELLI were devout Roman Catholics – and Freemasons. 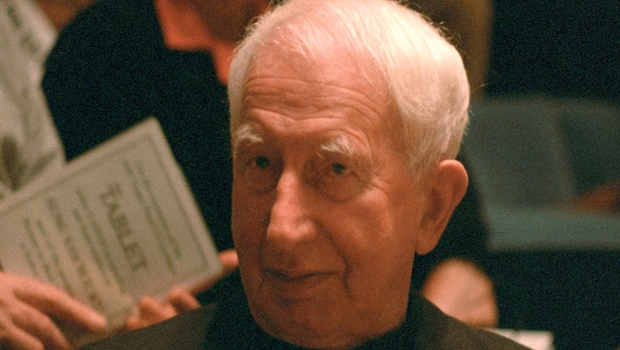 George Haliburton HUME (pictured above) attended Ampleforth College from 1936 to 1941. Thereafter, at the age of eighteen, he entered the novitiate of the Benedictine monastery at Ampleforth Abbey. He studied modern history (St. Benet’s Hall, Oxford), then theology at the University of Fribourg, Switzerland, before being ordained a Roman Catholic priest in 1945, when he adopted the monastic name Basil.

Basil HUME returned to Ampleforth College to teach religious education, history, French and German. He served as Head of the school’s Department of Modern Languages before becoming the Abbot of Ampleforth Abbey in 1963, in which position he remained until, in 1976,  he was appointed Archbishop of Westminster by Pope Paul VI.

1963-1976 was the peak period of the SAVILE/JACONELLI partnership.

The following extract from Basil HUME’s Wikipedia entry fills in some background:

Hume was accused of ‘hushing up’ a suspected sexual abuse scandal at Ampleforth College by not calling in the police when he received a complaint from parents in 1975 about Father Piers Grant-Ferris, the son of a Tory peer at Gilling Castle, formerly a prep school for Ampleforth. In 2005, Grant-Ferris admitted 20 incidents of child abuse. This was not an isolated incident and involved other monks and lay members. The Yorkshire Post reported in 2005; “Pupils at a leading Roman Catholic school suffered decades of abuse from at least six paedophiles following a decision by former Abbot Basil Hume not to call in police at the beginning of the scandal.”[16]

In 1984, Cardinal Hume nominated Jimmy Savile as a member of the Athenaeum, a gentlemen’s club in London’s Pall Mall. Following the posthumous revelation of Savile’s repeated sexual abuse of minors, members of the club have criticised Hume’s nomination of him for causing embarrassment to the club.[17]

HUME’s nomination of SAVILE to membership of the Athenaeum was seconded by another close confrère of SAVILE, Cardinal Keith O’BRIEN (featured image), who, in March 2015, was stripped of his privileges by the Pope following his exposure as a sexual offender.

Here is what award-winning SAVILE biographer Dan DAVIES (whose ‘In Plain Sight – the Life and Lies of Jimmy Savile’ dedicates a chapter [67] to the investigations carried out by me and Tim HICKS) has to say about SAVILE, HUME and the Athenaeum: 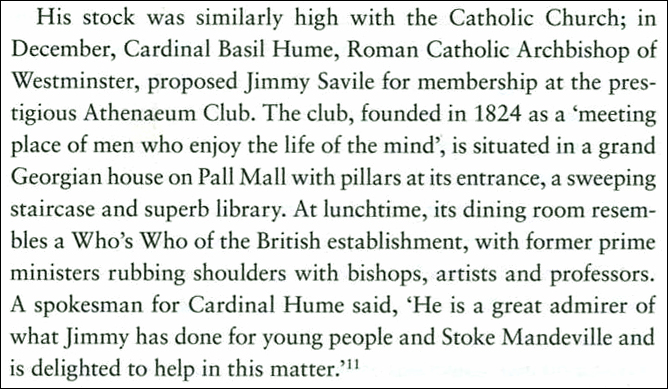 This extract from an 2014 Daily Express report on the Athenaeum is also informative:

“It has also emerged that the members of the Athenaeum were horrified when Jimmy Savile was elected, on the grounds that the tracksuit wearing DJ ‘would not be a natural habitué of a club that has counted Sir Winston Churchill, Lord Palmerston and Lord Curzon as members’. The only reason they didn’t veto him was because he was nominated by Cardinal Basil Hume, the Archbishop of Westminster, and Hume would have had to step down if his nominee was blackballed.”

To suggest that Basil HUME went ‘out on a limb’ for Jimmy SAVILE would be a monumental understatement.

Clearly, they must have been very, very close indeed – (What??? A Benedictine monk and a trashy DJ? A modern languages scholar and an all-in wrestler/marthon runner? A monastic headmaster (with a grave duty of care) and a prime-time cornball TV-presenter?

But we do know that they had at least one ‘interest’ in common – and they had it in common with SAVILE’s closest co-offender, Peter JACONELLI.

Like SAVILE and JACONELLI, HUME was a Freemason, of high degree, and with infinite loyalty to fellow brothers.

Basil HUME died on 17th June 1999, two weeks after receiving the Order of Merit. For a fuller picture of Basil HUME, see the Independent obituary, here.

In the light of the on-going Ampleforth revelations, Basil HUME’s relationship with Jimmy SAVILE merits the closest scrutiny.

And what about any relationship between Basil HUME and Peter JACONELLI?

Are we to believe that that Abbott Basil HUME, Athenaeum patron of one of the two most prolific predatory paedophiles of our times – both of them Catholic, both of them Freemasons, both of them perverts who offended together as well as separately – knew nothing of SAVILE’s co-offender and alleged sexual partner, Peter JACONELLI, the Roman Catholic Freemason? Tell that one to the Marines.

So I would be greatly obliged to anyone who can corroborate a (presently) solitary report that, as Abbot of Ampleforth, it was Basil HUME who received the Sacrament of Penance (confession) from Peter JACONELLI, a frequent caller at the Abbey in the triangle between Scarborough, County Hall (Northallerton) and the ‘meat racks’ of Leeds. The public has a right to know precisely how wide the web of North Yorkshire paedophilia really was, operating freely under the noses of the North Yorkshire Police.

Please contact me, in strictest confidence, by email at: mailto:news@nyenquirer.uk entering the words ‘FAO NIGEL – RE: AMPLEFORTH’, all upper case, in the Subject Line. Thank you.

More about the Sacrament of Penance (Confession) 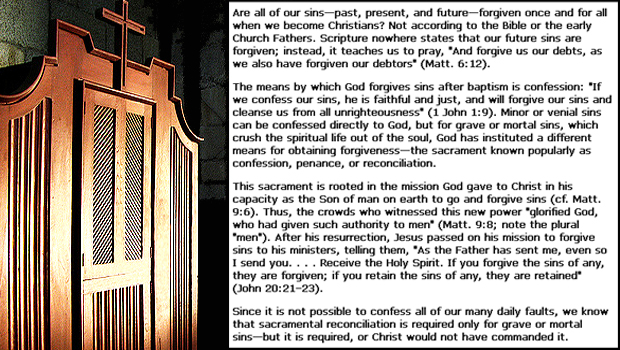