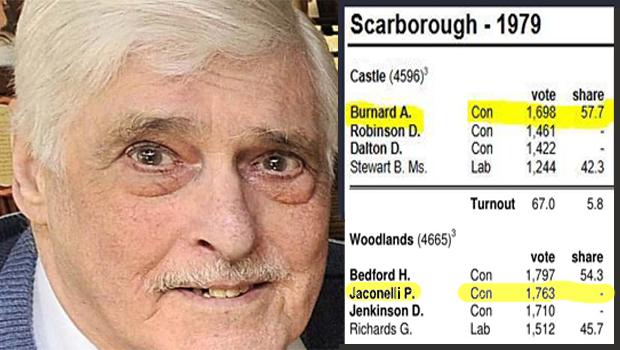 On 15th May 2018, Scarborough Borough Council Cabinet reviewed its publication of Statutory Notices, favouring a move from the Scarborough News (weekly) to the Scarborough Review (monthly) – at considerable benefit to the public purse.

Clearly, this strategy represented a lost revenue stream to the Scarborough News, but it was nevertheless widely welcomed in the hope that, thenceforth, the paper might wax more critical of the Council, having no financial incentive to toe the Council line.

On 22nd June 2018, the Scarborough News announced the retirement of long-serving editor and socialite Ed ASQUITH. This, too, prompted hopes of a more balanced style of reportage on Council affairs.

Nor did the SN mention Mr BURNARD’s close historical association with fellow Conservative Councillors Peter JACONELLI (Scarborough Mayor & NYCC Councillor) and Raymond COATES (NYCC Councillor), who – like Peter JACONELLI (and Jimmy SAVILE) – side-stepped justice when his non-Councillor progeny Eric and Nigel COATES were convicted, in 2002, of a variety of deviant sexual offences. Raymond COATES was found medically unfit to stand trial. However, he lived another 14 years (until 2016), when he died choking on a sandwich at the grand old age of 89. Hmmm.

Returning to Tony BURNARD – former Councillor or not, one struggles to imagine a seventy-nine year-old man embarking on such conduct at a time in life when most men’s libido is more or less ‘running on fumes’. Rumours of a stitch-up have been all over social media; however, a plea of guilty leaves little room for discussion. He will be sentenced at York Crown Court on Monday 22nd October 2018.

Granted, one does not have to be a politician to be a paedophile, but it would seem to improve the prospects of evading conviction – or appropriate sentencing.