Inevitably, the Peter Jaconelli scandal has now hit the national press. Following on from the allegations about the late Mr Ted Heath, we have been expecting this for some time. In an excellent article, the Daily Mail has written about the alleged links between Scarborough Mayor, paedophile and rapist Peter Jaconelli and former Prime Minister Ted Heath.

In fact, the North Yorks Enquirer found and published this Photoon back on the 3rd January 2015 as part of our on-going investigation into Peter Jaconelli. 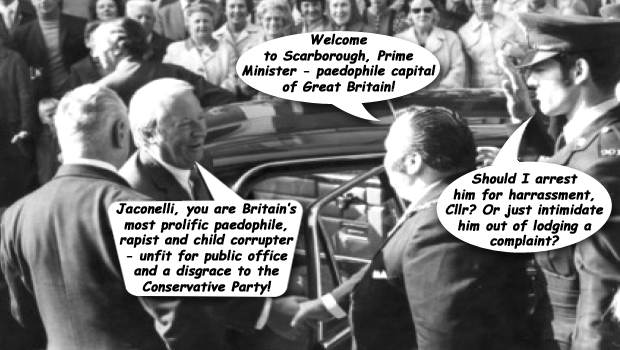 However, The Mail is correct when it states that:

This documentary scrutinised the NYE team, while we were working with another local news magazine, Real Whitby, in which we revealed that Peter Jaconelli, the Mayor of Scarborough was a paedophile and had been abusing children in Scarborough since the 1950’s. It was alleged on the programme that North Yorkshire Police had protected Jaconelli from arrest because of his status as Mayor, Scarborough Borough Councillor, North Yorkshire County Councillor and a prominent and wealthy business man.

As a direct result of the coverage of NYE team on this BBC investigation, Operation Hibiscus was launched.

This led to North Yorkshire Police finally admitting what everyone in Scarborough and the surrounding area – including the Police – had known for decades, which is that Peter Jaconelli was a ruthless paedophile and rapist who preyed on children with impunity, in joint enterprise with Jimmy Savile.

As shown in the graphic, North Yorkshire Police was thus forced to voluntarily refer itself to the IPCC.

More revelations:  Finally, the existence of a bigger and wider ring than just Savile and Jaconelli (as alleged by the NYE team for nearly three years) is reluctantly admitted

The information released by the Daily Mail above and also by The Sun in a less detailed article, is very interesting.

Since 2012, the NYE has been alleging that Savile and Jaconelli abused children acting in joint enterprise, as part of a ring in Scarborough. We have identified several other people whom we have reason to believe were members of the ring. North Yorkshire Police have steadfastly refused to comment on this and as you can see from the above press release, it confines itself only to Peter Jaconelli (the leader) and his subordinate Jimmy Savile.

However, The Sun article alleges that:

It appears that The Sun is quoting a Police source.

If this is so, then it is the first time that North Yorkshire Police have admitted that there were more people than Jaconelli and Savile  involved, as we have always alleged.

The Daily Mail also alleges that Jaconelli “would also crawl the streets with Savile in his pink Rolls Royce looking for boys to abuse and the pair were believed to be at the head of a nine-strong paedophile ring”.  This is a reference to Savile and Jaconelli’s habit of cruising around in Savile’s pink Rolls Royce to pick up youths from the burger bar along from the Police station, so they could be taken away in the Roller, abused and paid off. This was first revealed to North Yorkshire Police by a witness made available to them by the NYE in Whitby in February 2014.

Jaconelli and the Westminster Ring

In terms of the Westminster ring, Peter Jaconelli was a North Yorkshire County Councillor and was so prominent a figure in Yorkshire Conservative politics that he would have been well known to Conservative MP and to anti-sex-abuse campaigner Geoffrey Dickens MP (Huddersfield West).  Dickens could not have been unaware of Jaconelli’s offending, so open and well known as it was. The NYE believes that he was one of the men named in the dossier that Dickens gave to the Home Secretary Leon Brittan. Indeed, Mr Dickens stated that one of the people in the dossier was a friend of his and we believe this may be a reference to Jaconelli.

Lord Brittan, of course, was also the MP for Whitby & Cleveland (1974-83) and would have known well Peter Jaconelli, who was also a prominent member of the Scarborough and Whitby Conservative Association.

This does not give any one with knowledge of their past performance in investigating Jimmy Savile and Peter Jaconelli much confidence in its ability or intention to get to the truth.

Initially, when the allegations about Jimmy Savile emerged in 2012, a force spokesman commented:  “When the allegations surrounding Jimmy Savile were publicised, we carried out extensive searches of force records which did not reveal a local connection”.  Even though Savile lived in Scarborough, was a Freeman of the Borough and had attended a charity event with the Chief Constable, where he was given a chauffer-driven Police car for transport.

Then, when two victims came forward in October 2012, NYP stated that this was the first it had known of Savile:   NYP Press statement here.

In May 2013, it published the findings of Assistant Chief Constable Sue Cross into the allegations made by the NYE team when we were writing for Real Whitby.  Full report here, which dismissed all of our concerns about the failure of her force to arrest Savile or Jaconelli, despite the fact that their offending was well known locally:…..“there are no indications of omissions on the part of members of North Yorkshire Police”.

Following the outcome of Operation Hibiscus, Assistant Chief Constable Paul Kennedy had to make an apology on the BBC – despite nearly two years of denials by North Yorkshire Police.  He did at least have the integrity to admit that the investigation by the NYE team was the catalyst for the truth to come out and our work had assisted the Police by encouraging victims to come forward.

Assistant Chief Constable Cross (since retired) has never apologised to the victims for her failure to investigate the allegations surrounding Savile and Jaconelli properly.

There is a lot more to come out about Peter Jaconelli.  But it will not come out as long as North Yorkshire Police investigates itself.