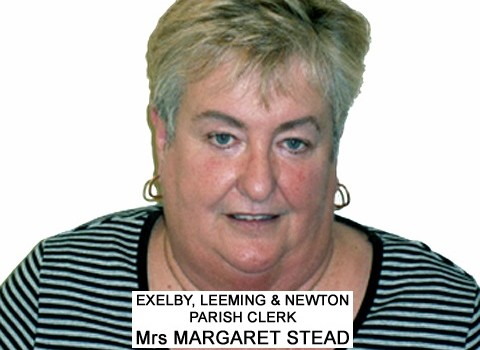 Though this article concerns itself with the seemingly trivial matter of a mere Parish Council at the very bottom of the governmental pyramid, it none the less illustrates a fundamental malaise that permeates the entire administrative system, the symptoms of which are:

It is amongst Parish Councils that these traits are rife – and most easily observed.

Readers will perhaps remember the article about the Chair of Seamer & Crossgates Parish Council, Councillor Harry SMITH, abandoning one of his Council’s scheduled monthly meetings rather than succumb to the indignity of being filmed – “Parish Councils: ANARCHY in the UK”. This feat of derring-do landed ‘Hapless Harry’ in the ‘Rotten Boroughs’ column of the Private Eye [009] – where he went on to pick up the “Open Governance of the Year Award” [011], and, in due course, received the full treatment on BBC “Inside Out”.

So, in the hope – but not the expectation – that Parish Councils in North Yorkshire might have taken good note and pulled up their proverbial socks, I decided take a closer look at a random sample of Parish Councils across the region. 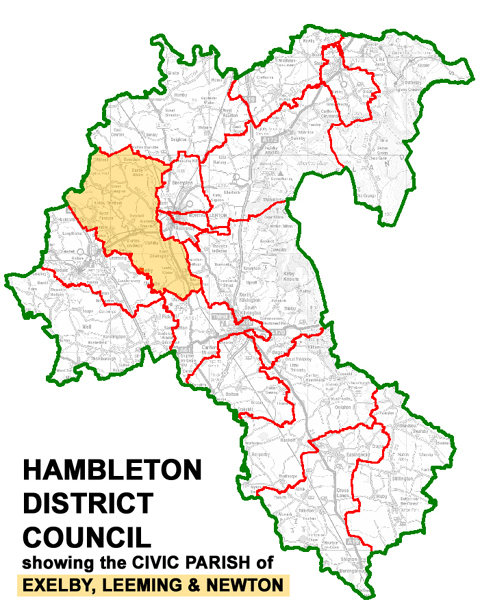 On 24th May 2014, I emailed the Parish Clerk and lodged several requests for information under the Freedom of Information Act 2000. My requests covered the following aspects of the Council’s affairs:

It is clearly a matter of considerable public interest that matters such as these should be dealt with by Parish Councils in an open and transparent manner – and, above all, that they should at least conduct the affairs of the public, including husbandry of the public purse, in accordance with the law. As public servants they are accountable to the public.

Exelby, Leeming & Newton Parish Clerk has now made her responses to my FOIA requests. I would summarise them thus:

“The parish council is aware that it needs to improve its overall tendering process and this is the reason why a revised policy has been adopted and advice has been sought, but I also thank you for drawing this to our attention and I wish to assure you that improvements are being made.”

An admission of total dereliction of process is apparently to be written off with a perfunctory expression of gratitude and a promise to do better.

o   any Damage or distress caused by any act of fraud or dishonesty.

o   the costs and expenses of rectifying, rewriting or erasing data.

o   liability arising from the recording, processing or provision of data for reward or to determine the financial status of any person.

o   the payment of fines or penalties.”

. . . which is not worth even the paper that the Minutes are not written on! Fortunately, the Clerk now recognises this:

“However, the decision making process is another issue on which the council has recently been taking advice as we are now aware that all decisions need to be made by the council by councillors present and voting at a meeting.  I hope that you will see that the council is striving to improve its procedures and I thank you for drawing this matter to our attention”.

The Clerk’s admission that “we are now aware that all decisions need to be made by the council by councillors present and voting at a meeting” is nothing short of astonishing. It would appear that decisions have for years been made on an ad hoc basis, with no regard to the necessary quoracy of the Council or even in the formal context of an Agenda or Minutes and no public record of any kind.

The Clerk could produce no Declarations of Interests whatever until they were hastily completed and addressed to Hambleton District Council (HDC) Monitoring Officer Martyn RICHARDS on or after 3rd June 2014 – a fortnight AFTER my FOIA requests went in. 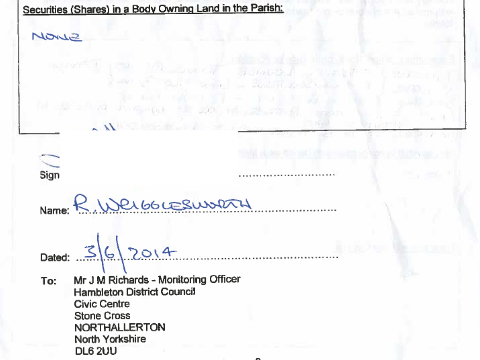 The Clerk concludes this series of admissions of utter incompetence with the words:

All seven ELN Parish Councillors have, therefore, been guilty of a criminal offence since 29th July 2012. The Clerk’s assertion that Members’ Interest were registered in 2011does not form part of the public record – is therefore mere hearsay – and in any case does not mitigate the breaches of the Localism Act 2011 that have taken place since 29th July 2012.

Naturally, I have now lodged Formal Complaints against all seven Councillors and called upon the Clerk to report them to the North Yorkshire Police, whose Chief Constable Dave JONES has personally assured me that we are all equal under the law.

“I confirm that the council does not hold this information. As it has not had a complaints policy it has not formally addressed complaints about its procedures and issued a formal decision notice.”

I also asked Clerk Margaret STEAD to offer me an explanation as to why ELN had not accepted the offer made by HDC to provide and maintain a FREE web-site for all of the Parish Councils in the District. The Clerk responded:

“The council resolved that as it was a small authority a website was not needed. This is a decision that can be reviewed in light of the information that you have given to the council. Thank you.”

With such a lamentable record of managing its public duties, small wonder that the Council resolved that a web-site was not needed. The very last thing they need is the public being granted easy access to its activities.

Next, I emailed my concerns to Gary NELSON, copying him my correspondence with Clerk Mrs Margaret STEAD, and asking him to comment on Parish Council’s conduct.

In his response, Gary NELSON stated:

“The District Council has no general jurisdiction over Parish Councils. You refer to alleged administrative errors, failure to act in a particular way, errors of judgment and, in your view, potential criminal offences.  None of these can be investigated by this Council. Of the items identified above, only item 2 [Registers of Interests] might involve me as Monitoring Officer under the standards regime and then only if referred to me by the Parish Council after you have made a formal complaint to it.”

This is somewhat evasive and, in fact, quite bizarre. As I wrote back to Gary NELSON:

“Your suggested remedy is that I complain directly to Exelby, Leeming & Newton Parish Council. That is to suggest that it is appropriate and proportionate for the Parish Council to sit in judgment on allegations against itself. Clearly, that is absurd.”

But Gary NELSON is apparently oblivious to ELN’s unbelievable incompetence and disregard for the law; he insists that it is none of his business. He responded:

“The District Council has no jurisdiction to consider the matters to which you refer, save and except item 2 below [Registers of Interests], and only then if referred to me by the Parish Council following a complaint to it. “

And if the Parish Council should decide not to refer a Complaint to him?

From the (minimal) information provided, it appears that the Parish Council can simply bury the entirety of its (unrecorded) maladministration and neither Hambleton District Council nor the North Yorkshire Police will be any the wiser.

According to Gary NELSON – in simple language – Exelby, Leeming & Newton Parish Council (or, for that matter, any Parish Council) would appear to be free to act as its own judge and jury in respect of any allegations levelled against it.

In what sense does that make Parish Councils accountable under the law?

But perhaps new Monitoring Officer Gary NELSON is being economical with the truth?

It may be helpful to consider the following extracts from Ch.7 Sections 26-34 of the Localism Act 2011, within which HDC qualifies as the relevant authority whose Monitoring Officer does hold responsibility:

27 Duty to promote and maintain high standards of conduct

(1) A relevant authority must promote and maintain high standards of conduct by members and co-opted members of the authority.

(9) In subsections (6) and (7) “allegation”, in relation to a relevant authority, means a written allegation—

2) Subject to the provisions of this Chapter, it is for a relevant authority to determine what is to be entered in the authority’s register.

(4) A court dealing with a person for an offence under this section may (in addition to any other power exercisable in the person’s case) by order disqualify the person, for a period not exceeding five years, for being or becoming (by election or otherwise) a member or co-opted member of the relevant authority in question or any other relevant authority.

That is all well and good. But answer me this:

If neither ELN Clerk Mrs Margaret STEAD nor HDC Monitoring Officer Gary NELSON is prepared to act to uphold the law – who will?

If even the lowliest Parish Councils are above the law, then society is split into two – the adminstration and the people. That does not sound like a democracy to me.

Note: Following publication of this article on 27th June 2014, NYE received a Letter to the Editor addresing some of the same issues. That Letter was published on 4th July 2014, and can be found here. 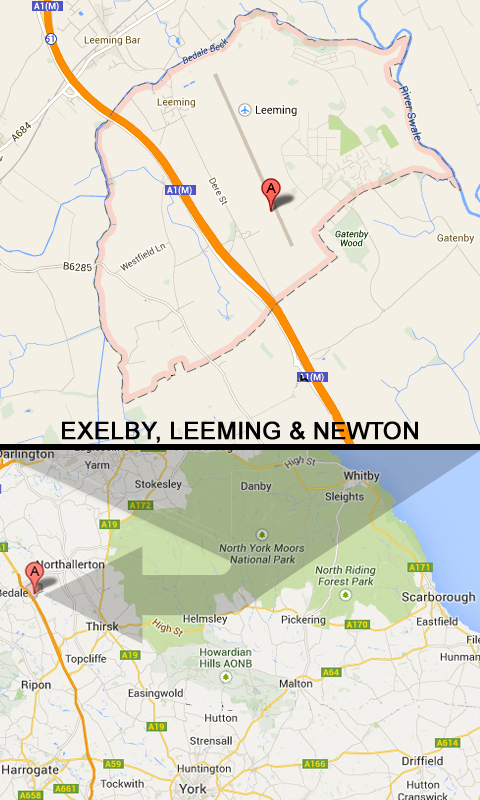