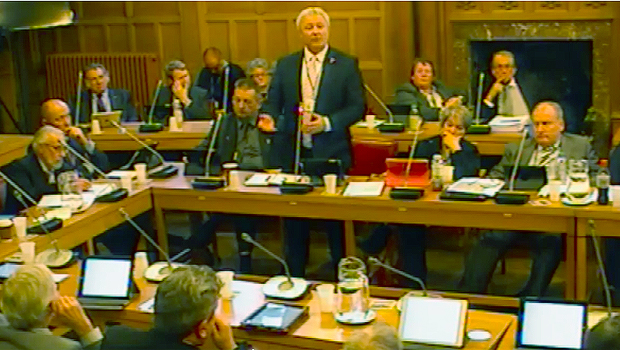 One of three Tory County Councillors who recently suffered de-selection from solid seats at North Yorkshire County Council has resigned from the Scarborough & Whitby Conservative Association and moved over to the Independent Group.

Councillor Andy BACKHOUSE, who along with Councillors Andrew JENKINSON – no longer an elected member at SBC – and David JEFFELS Derwent Valley & Moor) has reacted to his former Party’s ingratitude by submitting letters of resignation to both the Scarborough & Whitby Conservatives and the North Yorkshire Conservative Association.

Councillor BACKHOUSE now sits as a member of the Independent Group at both NYCC and SBC.

Further consequences of the County de-selections include the fact that three SBC Councillors have been nominated for the NYCC 2020 elections – Cllrs Sandra TURNER [Con.], Councillor John NOCK [Con.] and Councillor Phil TRUMPER [Con.]. All three sit on Whitby Town Council.

County sources inform me that former Borough and County Tory Councillor Jane Margaret KENYON-MILLER is to accept the nomination for Councillor JEFFELS’ long-held seat in the Seamer & Derwent Valley Division, though this has yet to be officially confirmed.

The word is that Councillor BACKHOUSE was de-selected for voting against the Tory Group on the infamous Futurist Demolition decision.

Councillor JEFFELS’ de-selection was apparently his ‘punishment’ for his role in the ‘leak’ of a covertly recorded interview in 2015, in which he confirmed his subscription to certain allegations against former Councillor KENYON-MILLER – though his subsequent apology was generally understood to have been graciously accepted.

Councillor BACKHOUSE’s change of allegiance comes at a timely moment when members of both the Labour and Independent Groups have been expressing increasing disquiet about the performance of  Councillor Janet JEFFERSON [Ind.] (who holds the Cabinet Portfolio for Finance & Operations in the 4-strong mini-Cabinet of Leader Councillor Steve SIDDONS [Lab.]), specifically on the matter of inadequate internal communications.

The SIDDONS 4-strong Cabinet presently stands at 3 Labour and 1 Independent.

If Councillor JEFFERSON gets the elbow, then Andy BACKHOUSE would be a very credible replacement.