Following a call for election by ten electors of the Whitby West Cliff ward, a by-election will be held on Thursday 30th July 2015, to fill the Casual Vacancy arising from former WTC Councillor Derek ROBINSON’s commendable decision not to take up his seat without a mandate.

Irrationally, Returning Officer Jim DILLON has determined that the other vacancy in the same ward will not be contested on the same ballot, though it would have incurred no additional cost whatsoever for Whitby Town (Parish) Council to increase its electoral mandate to two members instead of one.

Following the by-election, WTC will have thirteen members instead of the full contingent of nineteen, leaving two-thirds of the town without democratic representation.

Nevertheless, plaudits are due to candidates Jeff BOOTH and Richard INESON – one of whom will be elected to represent the electors of West Cliff ward with a full electoral mandate. Both have expressed disappointment at the parlous lack of democratic representation in Whitby – and so have I.

Some members of the Council are apparently less than delighted that the by-election is to take place at all, feeling that the £5K+ that the election will cost WTC could have been better spent on toys for deprived children or perhaps a little something for the elderly.

A motion to co-opt members for the remaining six seats was defeated by eight votes to four at the WTC AGM on 19th May 2015. 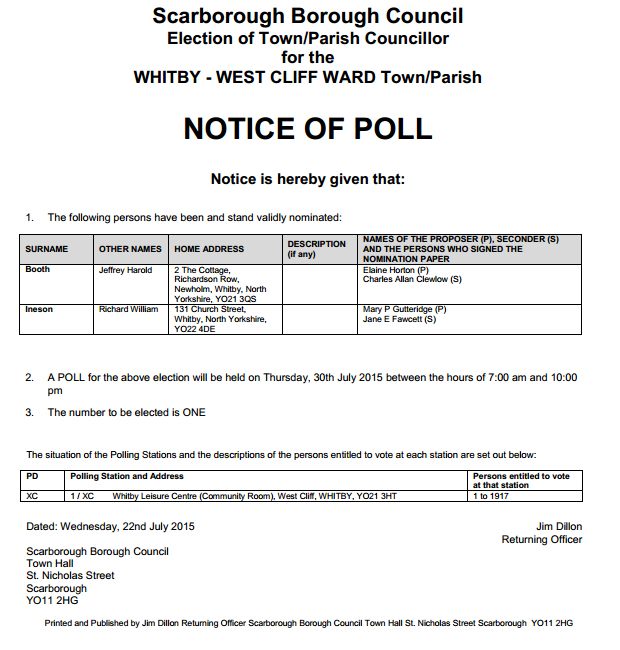 May I refer you to your Notice of Poll for the by-election in the West Cliff ward of Whitby Town (Parish) Council?

You will note that the circulated document, signed off in your name, is dated Wednesday 22nd July 2015.

This date is in the future.

Given that the 2nd July 2015 was not a Wednesday, it would appear that the explanation for this error is not one of straightforward typographical inexactitude.

Still no response from Jim DILLON. Presumably he feels that a little ambiguity over the election date will promote a good turn-out.