The Chief Constable of North Yorkshire Police (NYP), Lisa Winward, is a graduate of the FBI National Academy (FBINA) in Quantico, Virginia, USA, which she attended as a foreign student in 2011. This is a prestigious course to attend, places on it are highly competitive. She was selected for attendance from many applicants. It is clear that she did very well to obtain a place and to pass this course. Her attendance marked her out as a high flyer within NYP, probably leading to her accelerated promotion to Chief Constable and beyond.

Attendance at the FBINA also entitles her to be a member of the FBINA Alumni, which is called the FBINA Association (FBINAA).

Each year the FBINAA runs an annual conference at a City in Europe. Usually one of cultural significance that is a popular tourist destination. The NYE has run a series of articles on Chief Officers expenses generally and Chief Constable Lisa Winward’s tax payer funded visits to her FBI NAA conferences at various locations in Europe:

In this fifth article in the Chief Officer’s expenses connections series, the NYE is covering Chief Constable Winward’s Alumni soirées in 2017, when according to her 2017/2018 expenses claim (below) she apparently attended not one, but two FBINAA events. One in Hereford for five days between the 3rd and 9th of July 2017 and one in Bristol from the 22nd of September 2017 onwards.

Fortunately, the UK FBI NAA Conferences at Bristol and Hereford did not involve air travel to foreign locations, so the costs to the tax payer are much lower than usual.

According to the tourist information site Bristol is:

“a city that doesn’t just buzz, it thumps! If ever there was a city with a story to tell, it’s Bristol. Enveloped in the hills of South West England, it has its own unmistakable identity, grounded in roots from centuries past and carved out since by passionate locals and spirited fans. A hotbed of artists and activists, walk the streets and become part of a living canvas; cycle from the city to the outskirts and discover our green credentials for yourself. And that’s just a smattering of what makes this city the best”.

There is hardly any information on the FBINAA conference in Bristol on the FBINAA website. Fortunately the event was covered by the local press and the website of the Lord Lieutenant of Bristol. This revealed some of the conference program as follows:

The Bristol conference was exceptionally well organised. If the banquet wasn’t enough, It apparently had a full social program in addition to the banquet, which delegates can login for: http://fbinaa-bristol2017.com/login/social-programme/ 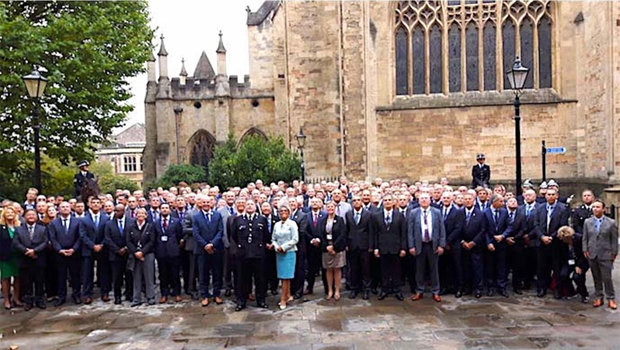 Opening ceremony Monday 26th of September 2017 outside Bristol Cathedral. FBI Agents are thought to be the ones wearing brown shoes with blue suits.

The FBI is a United States Federal Law Enforcement organisation.

I don’t understand why Chief Constable Winward has claimed expenses on the basis that she was attending a conference with the FBI, when in fact the conference was with an entirely separate unconnected organisation.

According to Chief Constable Winward’s expenses above, she booked into a hotel on Friday the 22nd of September 2017 to attend the conference that took place on Monday the 26th of September and Tuesday the 27th of September 2017. It is unclear to me why she needed four days in a hotel at the taxpayers’ expense for a two day conference.

I hope she wasn’t bored in Bristol over the weekend and had a chance to take a dip in the fantastic pool above.

I do not understand why this expenditure was not put through the NYP travel and accommodation system in the normal way, thus ensuring it was subject to the normal financial controls over training expenditure. Instead of being put through the Chief Constable’s personal expenses, thus ensuring it was not subject to these controls and thereby undermining financial control within North Yorkshire Police.

What is the justification for attending this conference?

The FBI NAA has forty four Chapters in the United States aligned to state boundaries and four international chapters. All the Chapters hold annual “retraining conferences” each year. In these conferences the US based Chapters will be considering crimes committed against federal law which is universal across the United States, or state law which applies within that Chapter’s state. Both laws apply within the same legal system and federal or state jurisdiction for that chapter. That is justifiable.

However, the European Chapter that Chief Constable Winward belongs to has members selected from fifty one different sovereign states each with a very different legal system. So any training will not be very relevant to the potentially fifty one jurisdictions the members operate in. Certainly, the three presentation identified above are not by operational police officers and do not appear to be focussed on any one specific training objective. It must be a concern that the conference had very limited training value.

This conference was focussed on cyber crime, cross border crime and anti terrorism. Full description in the Bristol Post article above. Issues that Chief Constable Winward is not operationally involved in. So in terms of the training value, I suspect that the money would have been better spent training sending operational detectives in these subjects, not the Chief Constable. Whose role is after all, managerial.

The Bristol conference was exceptionally well organised. The delegates can login for whatever social events in the social programme they wish to attend: http://nyenquirer.uk/world-press-freedom-day-friday-3-may/. So at least the delegates will have the opportunity of networking and enjoying the banquet in the Nave of Bristol Cathedral. I hope that made it all worth while. 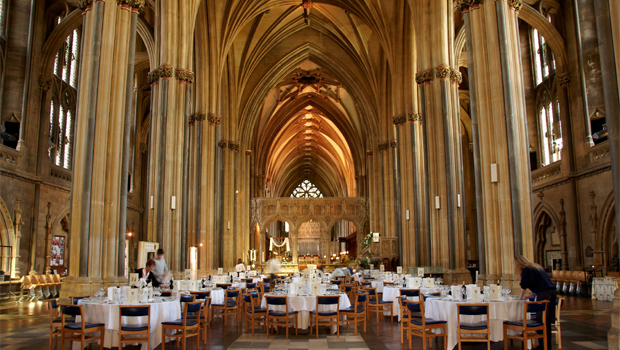 Scene of the FBINAA banquet attended by Chief Constable Winward, during the social program.

There is no mention of Chief Constable Winward’s attendance at the conference in Bristol anywhere on the NYP or Police, Fire and Crime Commissioner Websites. So NYP has maintained its usual impressively high level of secrecy. Even though the Bristol conference was covered openly by the local press in Bristol.

Could it be that Chief Constable Winward does not want to draw attention to the fact that while her force was enduring cutbacks, she was staying at the luxury

According to her expenses above, Chief Constable Winward attended an FBI conference in Hereford in July 2017.

“Hereford is a beautiful cathedral city; it is very well preserved with some of its buildings dating from the seventh century. Hereford lies close to the Welsh border and therefore has played a vital role in both English and Welsh history throughout the years. It is a city of great antiquity – its magnificent Cathedral dates from 1079 and is therefore one of the oldest in Britain.”

So it is a lovely city to visit for a conference, sightseeing or shopping.

I am also perplexed as to why Chief Constable Winward described the expenditure as an FBI Conference, or if any FBI or FBINAA Hereford conference took place at all.

The expenses appear to indicate a five day conference but accommodation for only one night has been charged. So I can’t confirm how long the conference was, or what was going on at Hereford.

As with the Bristol conference, I do not understand why this expenditure was not put through the NYP travel and accommodation system in the normal way, thus ensuring it was subject to the normal financial controls over training expenditure. Instead it has been put through the Chief Constable’s personal expenses, thus evading these controls and thereby undermining financial control within North Yorkshire Police

There is no mention of Chief Constable Winward’s attendance at the conference in Hereford anywhere on the NYP or Police, Fire and Crime Commissioner Websites. So the usual high level of secrecy has been maintained.

If the expenditure is all above board and justifiable, I do not understand why this is all so secret.

North Yorkshire Police is a public body with a shocking history of misuse of training allowances by Chief Police Officers. BBC report here.

I do not understand why Constable Winward cannot simply resolve the questions about her expenses openly, in accordance with force policy and the College of Policing Code of Ethics and be done with it.

It appears there are obviously still serious financial control issues surrounding the scrutiny, approval and authorisation of Chief Police Officer’s expenses and a culture of deference and secrecy surrounding them. That is unacceptable in a public body.