Popular Guest Author Councillor Norman MURPHY [Ind.] gives us the low-down on the Council *hit factory – pardon the typo, the Council’s hit factory – well-known for its obsession with tourism (which is why it closed its three Tourist Information Centres).

Although many people will only have vaguely heard of the Destination Business Improvement District scheme, or DBID as it was affectionately known in Scarborough Town Hall until recently, my advice would be, if you are a Borough rate-payer, take great interest in it, as its cost will be appearing on your rate bills, in one way or another, in the very near future.

So what is the DBID, I hear you ask, and why will it cost me money? Well, for those of you who have not followed this particularly sneaky Town Hall scam, this is how it works and this is how it will affect both business owners and ordinary residents. A DBID, as its name implies, is a scheme designed to enhance and improve business development in a particular district; in our case the East Coast of Yorkshire.

The money needed to make the proposed improvements will be raised, mostly, from private businesses but there will also be a substantial rate-payer contribution. In the case of extracting money from business owners, this will be achieved by the Council placing an additional 1.5% tax on nearly 1,400 tourism related business with a rateable value above £12,000.

For the ordinary rate-payer, our contribution comes in the form of money taken out of our rates and used for setting up the scheme and our obligation to also pay the 1.5% tax on any tourism related business the Council owns such as our car parks. This additional tax will, in theory at least, raise, over the five years of the schemes existence, more than £5 million, to be spent, theoretically, on improving our tourism offer. However, it is not difficult to see that, at its core, as most of you will already have guessed, the DBID scheme looks more like another Council-backed ploy designed specifically to extract more money from both business owners and ordinary rate-payers.

Indeed, although the DBID business plan sets out a magnificent array of impressive aims and objectives, it actually guarantees nothing. The money raised, it is claimed, will be used to fund additional tourism-related schemes and initiatives that will, hopefully, bring more tourists to our region. It is suggested, for example, that some of the money could be used for additional signage, which presumably, it is hoped, will encourage visitors to come to the East Coast more frequently. They are possibly thinking that, as the B52’s put it in Love Shack: “if you see a faded sign by the side of the road that says fifteen miles to the Love Shack”, potential visitors will see the sign and make a headlong dash for the coast.

However, back in the real world, many people with tourism-related businesses, principally those who have suddenly been told they will have to contribute to the £5 million demanded, don’t believe their businesses will benefit from the DBID. Many don’t even want to be involved in the DBID and still more don’t understand why they are being asked to pay for it. Indeed, many say they were not properly consulted: now there’s a surprise, “NOT” – transparency and openness are, many would argue, a joke as far as the Town Hall is concerned.

Moreover, other qualifying business owners vigorously object to the way the scheme is to be managed: with a board of directors that looks more like a load of jobs for the boys, rather than a democratic body with the interests of those who are paying for the scheme at heart.

Many business owners also strongly object to nearly £1 million of the money being raised from the scheme being creamed off to pay for consultants: again, with the track record of the current leadership, nothing surprising about this proposal. Then, to add insult to injury, many think that the creation of loads of new, highly paid, management posts to run the scheme is a scandalous waste of their hard earned money: again nothing, many people feel, the present leadership of the Council have not backed many times before.

So, the DBID scheme looks, to most of those who will have to pay for it, like a typical, undemocratic, Council run scam. However, although the DBID scheme is very reminiscent of many previous Council backed schemes, there is this time, a rather large fly in the proverbial ointment. Although Scarborough Council gets to collect the money, it also has to contribute a considerable amount of rate-payers’ money (our money) into the scheme, with no guarantee that any of the money it, or any of our local businesses contribute to the scheme, will ever be spent on the things we really need.

The DBID scheme, is in fact, a completely stupid waste of everyone’s money, with only those who have paid nothing into the scheme, the consultants, having any chance of getting anything substantial out of it.

Furthermore, and to make matters worse, now that the Council has voted us into this totally useless and costly scheme, there is no way of escaping the money grabbing clutches of the DBID organisers. Although many people would like us to check out of the DBID, including now it seems the Tory leadership of the Council, the rules of the DBID scheme, to which the Council leadership has signed us up, do not allow for any business or organisation to leave, we are, in fact, stuck. Or, as the Eagles said in their classic Hotel California: “You can check out any time you like. But you can never leave!”

Consequently, the imposition of the DBID scheme has turned into a rather embarrassing, and politically damaging fiasco for our intrepid leaders bunkered down in the Town Hall. Indeed, the DBID scheme now sits very nicely alongside many other fiascos which, in recent years, the current leadership have inflicted upon us.

The unsecured £9 million loan given to Benchmark to build the water park, which many believe will never be paid back, perhaps, heading the list. However, the list is long and there are many strong contenders for the top slot. We must also consider the £7 million, and rising, squandered on the Park & Ride operation. While few in Scarborough will ever forgive, or forget, the £4.5 million wasted on knocking down the Futurist theatre.

So, as can be easily understood, this highly unpopular, politically sensitive hot potato, coming as it has at this politically inconvenient time, with local elections only a few weeks away, has presented the current political leadership of the Council, with a bit of a problem.

However, always adept at solving politically inconvenient and embarrassing problems, our leaders have again found, at least in the short run, a solution to their DBID problem. The DBID scheme because it has been shown up for what many consider it really is, a Council backed ‘con’, carefully crafted to make a few people very wealthy and deprive hard working business owners and residents of their cash, has been, temporally, kicked into the long grass.

Now, the whole DBID plan has been put on hold and no decision on its implementation will be decided until, you guessed it, after the local elections.

However, for many people, especially those who will have to pay for the DBID scheme, it seems that Gloria Gaynor’s “I will survive” has more resonance when she tells her partner who has betrayed her that he can; “Go on now, go, walk out the door. Just turn around now cause you’re not welcome anymore”. Well, that’s what the songs say.

The current administration in the Town Hall thought that their catchy little number, the DBID scheme, would be a smash hit, instead it looks as though it will turnout out to be yet another costly flop. However, undeterred, the present leadership are about to release a compilation of their previous classics which they hope you will buy. Memorable tracks to listen out for are the catchy “Benchmark Loan”, the enchanting “Futurist Demolition”, the haunting, “Whitby Piers Fiasco” and the unforgettable “We are an Open and Transparent Council”.

The release date is any time now and they hope you will buy it as they have many more smash hits they want to bring to you. However, rumour has it that those who have heard their mood music before are getting a little tired of dancing to the same old tune and there is speculation that, on May 3, there might be a change at the top of the charts. 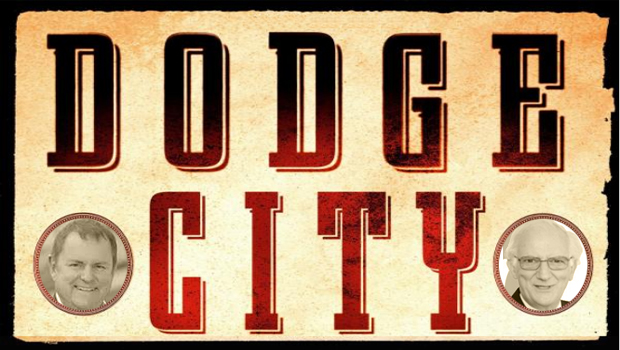