“A Boulder in their Waders”

Although the previous worse-than-useless, many say, Conservative Council administration has now been unceremoniously removed from the Ivory Tower they once inhabited at Scarborough Town Hall, the legacy of their incompetence will, unfortunately, live on for many years to come. Indeed, one of the consequences of their disastrous time in office has recently been re-emphasised by the arrival of the observation wheel on Scarborough’s sea front.

The wheel now sitting as it does on the site of the demolished Futurist Theatre may be viewed by our visitors as a source of entertainment; but to the hard-pressed ratepayers of Scarborough, its presence represents a monumental waste of money, £4.5 million and still counting, and the loss of a much-loved theatre.

Moreover, the money spent demolishing the Futurist means that much needed infrastructure projects, such as building new public toilets, cannot now be afforded. Indeed, the draining of Town Hall resources, our resources, by the previous Conservative administration has not only left the Borough’s coffers empty, it has also left us with a huge legacy of debt.

However, the disastrous financial legacy that the previous administration has bequeathed to the current administration by its reckless spending and borrowing is not, by any means, the only financial burden the poor ratepayers will have to pick up. On 1st August, the bills for the dreaded DBID, Destination Business Improvement District scheme, started landing on businesses-owners door mats. The DBID scheme, introduced and supported by the previous Conservative administration, will now seek to impose an additional tax of 1.5% on nearly 14,000 east coast tourism-related businesses for the next 5 years. The DBID tax will, in fact, pick from the pockets of many already hard-pressed businesses – over £5 million.

The money raised, it is claimed, will be used to fund additional tourism-related schemes and initiatives that will, hopefully, bring more tourists to our region – but many of those being asked to pay for the DBID see little or no chance of any of the money being used to their benefit. Indeed, it is not difficult to see that, at its core, the DBID scheme looks more like another Council-backed ploy designed specifically to extract more money from both business-owners and ordinary rate-payers, than a genuine attempt to improve tourism.

A view that is only reinforced when one sees that those running the DBID will trouser 20% of all the money paid into the scheme. It is therefore, perhaps not surprising, that many qualifying business owners vigorously object to the way the scheme is to be managed, having, as it does, a Board of Directors who look more like they were appointed, not because of what they know, but because of who they know.

Worse still, those who are appointed to the Board will retain for themselves 81% of all voting rights, allowing them to decide what any money raised is used for, without any possibility of a challenge to their decisions being made by those who are paying for the scheme. The potential abuse of the system, almost guaranteed by this set-up, is proving so unpopular with even those who initially welcomed the scheme that the DBID organisers are now struggling to find Board Members.

The DBID, in many people’s opinion, will have a very damaging financial effect on many east coast businesses, with the knock-on consequences almost certainly being lower investment and fewer jobs being created. However, although the debilitating effects of the DBID will apply across the whole Borough it is, perhaps Whitby, that will feel the most financial pain.

Business-owners in Whitby, already aware of the consequences of the DBID, tried to stop it before it became a ‘live’ scheme. But the Conservative former administration claimed there was nothing they could do to stop its implementation and now it is probably too late.

The legacy of the Conservative mismanagement of our Borough and its finances will, of course, be progressively felt by most residents and visitors in the coming years. However, the financial hardship that the DBID looks likely to inflict on Whitby may, sadly, be much more immediate and severe than elsewhere in the Borough.

It is, therefore, difficult to comprehend why, as this tax will without doubt financially hurt most the people of Whitby, and those who live in the villages surrounding Whitby, that residents from these areas of the Borough, should vote so comprehensively, and it has to be said so enthusiastically, “Conservative” – rewarding the very people, and party, who’s actions undoubtedly inflicted the misery of the DBID on them. Indeed, it is staggering to reveal that of the 11 seats available in the Whitby area on Scarborough Council 8 were won in May by Conservative candidates.

Whether the madness of the DBID and its money-grabbing objectives can now be stopped by the new Council is, of course, difficult to know for sure. However, what is sure is that it was the previous Conservative Leadership who used the Council’s votes, and influence, to inflict the DBID on the people of Whitby and, sadly, it looks like it will be the people of Whitby who will now have to pay the highest price for its imposition.

Indeed, as the great American horror story writer, Edgar Allen Poe, once said, when asked about ‘legacy’, “The past is a pebble in my shoe.”

However, in the case of the DBID legacy, the Conservatives have left to the people of Whitby, the dreaded DBID might better be described by them as “A boulder in their waders”. 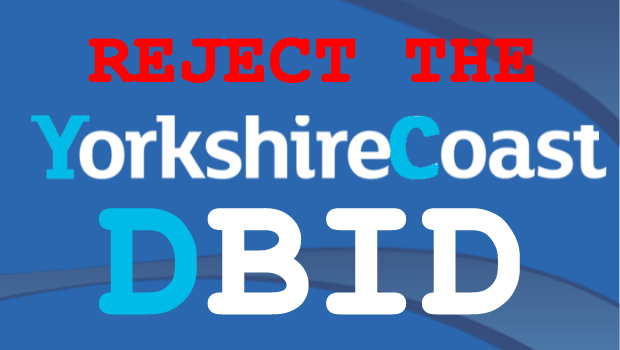