Regular readers of the North Yorks Enquirer – and before that, of the Real Whitby Magazine – will be aware that I have been scrutinising all levels of local government since 2009, in the public interest.

At the level of the so-called ‘third tier’ – Town and Parish Councils – there have been some outrageous (sometimes comical) abuses of democratic process, amongst them:

Seamer & Crossgates Parish Council (in the Borough of Scarborough) behaved so badly that Private Eye magazine took them to task on three separate occasions: 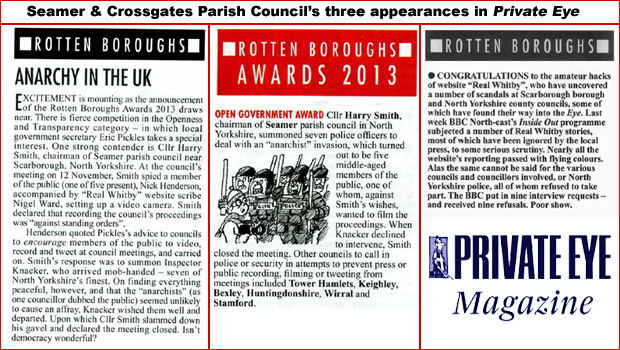 Seamer & Crossgates Parish Council also featured in the BBC ‘Inside Out’ documentary which covered many of our exposés.

Closer to home, Whitby Town Council (WTC) has also conducted its business – our business – in the most incoherent manner imaginable.

Yet despite a welter of well-justified criticism, WTC has recently elected to the titular position of Mayor the Councillor who so objected to being filmed in her capacity as a Councillor that she told a citizen-journalist:

It has taken five years for WTC to succumb to our lawful demands and, in consequence, to film their meetings and display them on the Council’s web-site – having allowed over two years to elapse since they passed a Resolution to that effect.

Astonishingly, Whitby Town Council once accorded to me and (two other campaigners) Letters of Commendation for our work campaigning for the restoration of Whitby’s historic (though dilapidated) lighthouses:

To suggest that they have not the first idea whether they are coming or going reduces to farce the very serious fact that the are my local government representatives. The last time I checked, only one Councillor had the benefit of a genuine electoral mandate from Whitby electors – a stunning 124 votes on a turn-out of 12% (democracy in the fullness of its flower, eh?). The rest of them achieved their positions either unopposed or by the widely-discredited ‘old crony’ process of co-option.

Hinderwell Parish Council, on the border of Redcar & Cleveland, even abandoned a meeting, rather than succumb to the legal requirement to allow members of the public to film it:

But even these examples of flagrant incompetence and general unfitness for office pale into relative insignificance in comparison to the sleep-walking antics of Pocklington Town Council in the East Riding of Yorkshire, whose meetings and Resolutions have been conducted for some time now in a manner that suggests that they have acted ultra vires (beyond their legal authority) on every substantive Resolution that they have passed for some time now.

On Wednesday 8th June 2016, I attended Pocklington Town Council for the specific purpose of drawing this disastrous departure to the Council’s attention. The graphic a little further down the page explains how it is that their Resolutions (to disburse monies from the public purse, to enter into loan agreements, and so on) appear to have taken place whilst the Council was not in lawful session. This could leave Councillors personally liable, jointly and severally, for any negative financial consequences.

Wednesday’s Meeting began with prayers. Christian prayers. Pocklington Town Council would therefore appear to be unaware of the requirements of the Equality Act 2010, which expressly prohibits favouring one religion over all others in affairs of government.

The Meeting proper began with Agenda Item 1, the invitation to receive Declarations of Interests from members, which took place without incident.

It was clear to me, as I rose to address the Chair, that the Council was in a state of suspended animation. The animus directed towards Councillor Andy STRANGWAY [Ind.] was tangible. In particular, Councillor Martin COOPER was sneeringly contemptuous. (I note that he has made some very intemperate postings on Facebook – well worthy of a Formal Complaint). Another Councillor’s jaw hung slack as a dribble of saliva, succumbing to the inexorable pull of gravity, traversed his chin at an oblique angle before dripping soundlessly to his knee.

Consequently, the Council was not in a receptive state to absorb the information that I spelled out to them in the clearest and most respectful terms:

Here is the document that I passed to the Mayor. It is simple enough but it might just as well have been in Sanskrit. 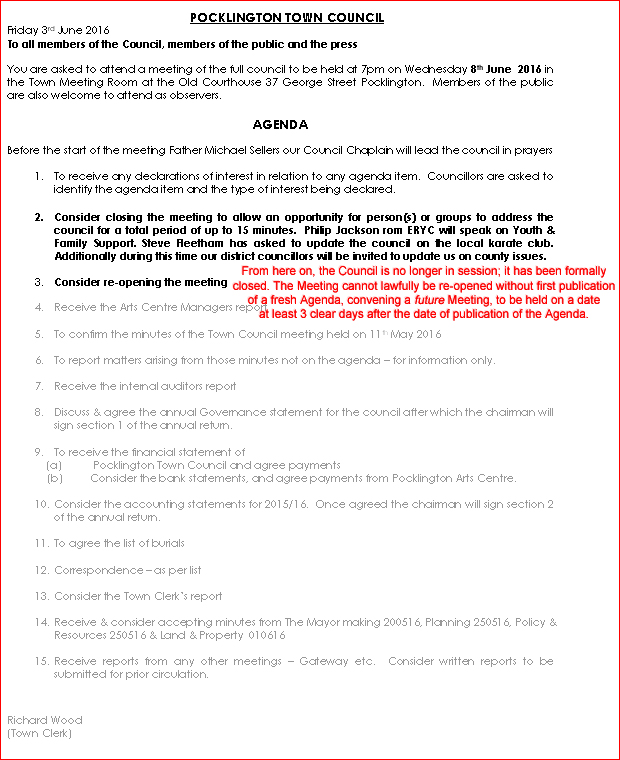 Despite my attempts to inform the Mayor, Councillor David SYKES [Con.] (elected, would you believe, by a majority of Councillors as being the most fit amongst them to conduct, as Chair, the lawful business of the Council) of the dangers of proceeding with the meeting in a manner contrary to both commonsense and the law of the land, I met only with a rude interruption (at 1m:25s in the clip) and a very clear indication that Mayor David SYKES had not the faintest notion what it was that I was attempting to communicate to him and his Council, nor that it was entirely to their collective advantage should I succeed. This was not ingratitude; it was blank incomprehension. Grass roots Toryism is not renowned for its perspicacity.

Pocklington Town Mayor David SYKES did not even bother to consult the out-going Town Clerk, Mr Richard WOOD (who bears responsibility for advising the Council on legal issues – and for publishing his series of absurd, self-truncating Agendas), or Mr Gordon SCAIFE, the in-coming Town Clerk, who takes up his unenviable post upon Richard WOOD’s welcome departure at the end of the month. (May the force be with him!).

Remember, the Meeting had been formally closed. Finished. All over. No loner in lawful session.

But Pocklington Town Mayor Councillor David SYKES [Con.] simply breezed ahead with the Agenda, oblivious to the risk in which he was placing himself and his hapless colleagues. The cogs had simply not engaged. The lights were on, but there was no-one at home. Even ERYC Councillor Dee SHARPE [Con.], who really ought by now, with some years of ERYC experience behind her grinding away under ERYC Leader Councillor Stephen PARNABY [Con.], to have recognised the enormity of Town Clerk Richard WOOD’s faux pas, displayed only an indifferent, almost vacant gaze.

However, the members of Pocklington Town Council, I am told, are busily proud of their web-site:

They look it. All thirteen of them. (Unlucky for some, eh?). 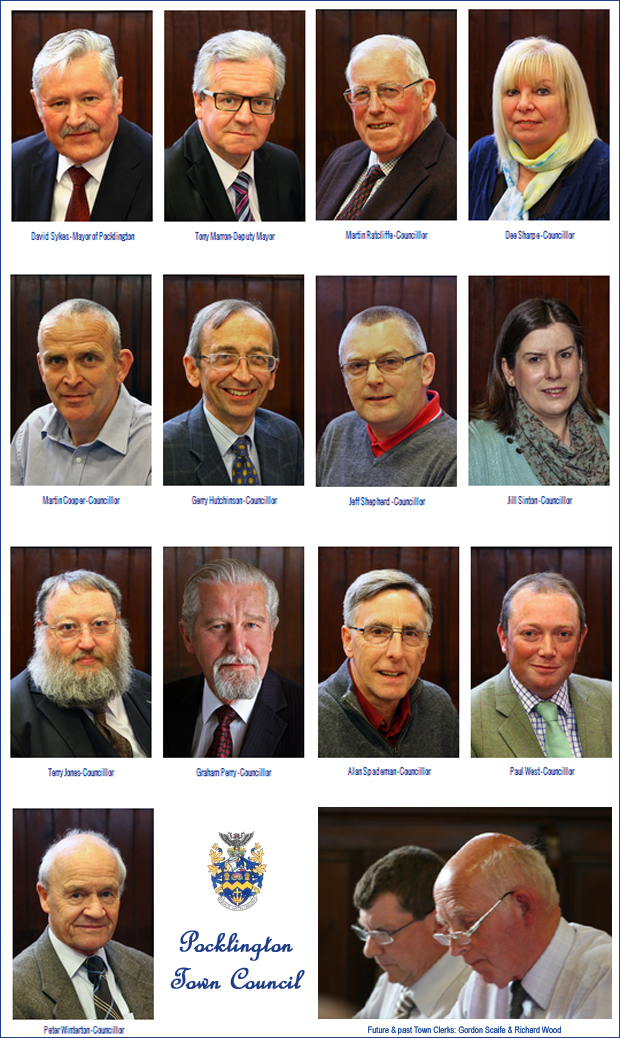 Most disappointing of all is the petty and childish jealous with which the members of Pocklington Town Council view the roaring successes achieved by Councillor Andy STRANGEWAY [Ind.] in the nine weeks since his storming election victory – victory at the main expense of PTC Councillor Paul WEST [Con.], who was confidently expected (and expecting) to secure what is generally regarded as a Tory safe seat.

According to many locals, Councillor Andy STRANGEWAY [Ind.] has made more of a positive contribution to the life of his community in the past nine weeks than Pocklington Town Council can claim for the past nine years.

In summation, I shall be sniffing around Pocklington Parish Council very closely indeed from now on. And I have a good nose for a rat.

Meanwhile, I leave you with a much-quoted provisional verdict that I may subject to appeal in the fullness of time:

That may be an over-statement, but it has to be said of Pocklington Town Council that “that deaf, dumb and blind Council sure sets a mean benchmark”.