Pressure on Scarborough Borough Council’s Audit Committee has notched up yet again with the release of a second solicitor’s letter from Mr Gareth PINWELL of ASHFORDS LLP, to the Committee’s Chair – Councillor Andy BACKHOUSE [Ind.] – on behalf of the Yorkshire Coast Levy Payers Association.

In an email to one of the Levy Payers, Councillor BACKHOUSE has assured Levy payers:

“The Audit Committee have been tasked (by Full Council) to scrutinise the above report, call witnesses as appropriate, and formulate a response to the report in the form of a single or a raft of recommendations that will then be presented to Cabinet and ultimately to Full Council.”

Members of the public who watched the Council’s live-streamed Cabinet ZOOM meeting of Tuesday 16th June 2020 will not be encouraged, have described it as being run like a séance – are you there Councillor Randerson – one knock for ‘Yes’, two for ‘No’.

Having watched it myself, I cannot disagree. I was astonished to see members and Officers breaching general data protection regulations (GDPR) by exposing photos of individuals in the background of their webcams’ fields of vision.

One might have expected the Monitoring Officer to have cautioned members about data breaches, but . . .

Returning the the Yorkshire Coast BID Ltd, I can confirm that one member of the YCBID – Mr Tony SNOW – has already resigned in anticipation of a humiliating outcome to the Audit Committee’s deliberations. I can also confirm that two others are in close touch as they consider their own positions. 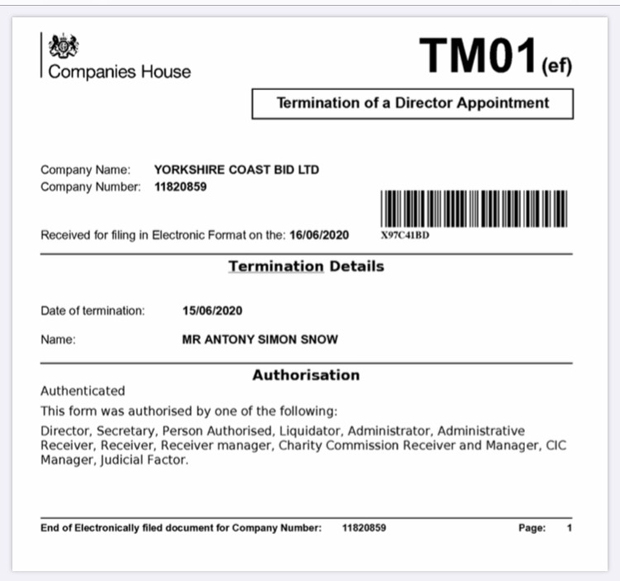 The Audit Committee is comprised of:

Here is the Audit Committee Agenda (including the STANYON Report):

On a personal note, I am happy to offer my congratulations to SBC CEO Mr Mike GREENE on his wonderful success and well-deserved leave of absence. Stay safe, Mike.