Regular readers of the North Yorks Enquirer will already be aware of the circumstances surrounding the forced resignation of Eskdale School’s Chair of Governors, Mike WARD following pressure from Headteacher Sue WHELAN, who called upon him to resign following the public announcement that Scarborough Borough Councillor Mike WARD had joined UKIP.

For those who missed the action, detailed coverage can be found here:

Unsurprisingly,  the incident has drawn comment from across the north-east: 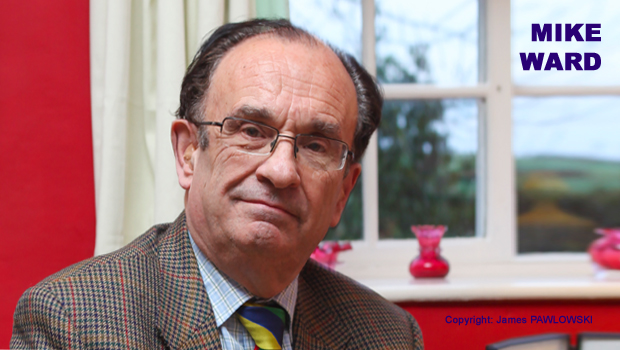 The official line now is that a so-called ‘Independent Investigation’ has been commissioned by the Eskdale School Board of Governors, under Sue VERRILL – who styles herself Acting Chair of the Board – though Pete DWYER, the Corporate Director for Children & Young People’s Services at NYCC, prefers the term ‘Interim’ Chair, which term (he tells me) has “the same meaning in this context”.

In an email pre-dating this latest official line, Sue VERRILL assured me that she personally – not the Board collectively – had commissioned the ‘Independent Investigation’, using her discretionary powers under the terms of the School’s Complaints Procedure.

Only when I pointed out that the Complaints Procedure does not endow Sue VERRILL with any such disgressionary powers did the official line change to the present version – stating that it was the Board, and not Sue VERRILL alone, who commissioned the ‘Independent Investigation’.

“The moving finger writes, and having writ” . . .  deletes – and writes afresh, only different this time.

One might have expected that either Sue VERRILL or NYCC’s Pete DWYER should have offered an explanation for this complete fudge of due process. One would have been disappointed.

And it would seem that the so-called ‘Independent Investigation’ may not be anywhere near independent at all – at least not in the sense that one would like to be able confidently to expect (if one did not already have a handle on NYCC’s attitude to transparency and accountability).

Speaking of “transparent”, in her correspondence with me, Sue VERRILL declined to disclose the name – or even the gender – of the so-called ‘Independent Investigator’, but I can reveal that information now.

The ‘Independent Investigator’ is one Jane LEWIS, the Chair of the Board of Governors at Osbaldwick Primary School near York – itself a participant in a recent federation of local schools. Like Pete DWYER, Jane LEWIS is a ‘federationist’.

I have been unable to discover any indication that Jane LEWIS has any credentials or expertise that would begin to qualify her to investigate.

But Jane LEWIS is not entirely alone in her task; she will have her hand held throughout her ‘Independent Investigation’ by one Haroon ‘Harry’ RASHID – who just happens to be the Senior Human Resources Advisor of the Local Education Authority’s Children & Young People’s Services Team at NYCC.

In short, the so-called ‘Independent Investigation’ is being conducted by a couple of committed ‘federationists’ who are ideologically opposed to everything that Mike WARD and the Eskdale School Board of Governors stand for and have sought to achieve – to retain independence, so Whitby parents can enjoy at least some element of choice in their childrens’ schooling.

The curious thing is this: although I was the first to lodge a formal Corporate Complaint, Jane LEWIS the ‘Independent Investigator’ has not contacted me or invited me to attend an interview to provide the first-hand contemporaneous evidence in my possession. I have pointed out this ‘oversight’ to both ‘Interim’ Chair Sue VERRILL and to NYCC’s Pete DWYER. Guess what? No response from either.

I am willing and able to furnish key information, but the ‘powers that be’ are clearly unwilling to receive it.

There can be little doubt that there is no will to get to the truth in this disgraceful affair. There is every indication that the Local Education Authority is secretly delighted with Sue WHELAN’s discriminatory action, since it has deprived the ‘no-to-federation’ campaign of its strongest and most potent proponent; with Mike WARD gone, it will be that much easier for Pete DWYER to ignore the massive public support for the 11-16 age-range application.

And now Pete DWYER is attempting to wheedle out of my legitimate Freedom of Information request for all correspondence between NYCC and Eskdale School over the relevant time period:

In order that I can ascertain whether it is possible to process your request under the Freedom of Information Act within the Council’s limits (18 hours), can you please provide greater clarification as to the scope of the information requested (eg timescale, subject matter etc).

Is he seriously suggesting that it will take more than the statutory limit of 18 man/hours to collate, at the very most, a couple of dozen documents? Which one is it that Pete DWYER cannot afford to let me see?

But why (you will ask) would NYCC go to such lengths to mount a cover-up operation just to protect a Headteacher who has clearly exceeded her remit, both in demanding Mike WARD’s resignation (Pete DWYER has conceded this much already, in an email to me in which he stated that “it is not for the Headteacher to decide who chairs a governing body”). He might have added, if transparency figured in his ethos, that it is not for the Headteacher to ACCEPT Mike WARD’s resignation, either – but that is exactly what has happened.

Part of the explanation may be inferred from the fact that, following UKIP Leader Nigel FARAGE’s intervention, County Councillors Sam CROSS and David SIMISTER have now lodged formal Corporate Complaints against both Pete DWYER and NYCC Chief Executive Officer Richard FLINTON in respect of their actions and inactions totalling fourteen infractions of the Officer Code of Conduct – not least breaching their statutory duty of care to both of the main protagonists by doing absolutely nothing to advise, assist or protect them.

I invite readers to form their own opinions on the matter of whether or not Pete DWYER fulfilled his duty of care to Mike Ward when he responded to Mike WARD’s email announcing and explaining the circumstances of his forced resignation on 13 October 2014 (and, by the way, Mike WARD did not ‘leak’ this email to me – I have it direct from Pete DWYER himself, who appears to have been oblivious to its damning nature).

My appreciation for your service as a governor and specifically as Chair.

I have never questioned your commitment to improved education for the children and young people in Whitby, even if we have held differing views on occasions on how that would be best achieved.

That is the entirety of Pete DWYER’s response.

Nothing of the kind.

Just a trite and perfunctory ‘thank you’ and a tacit admission that his own agenda was contrary to Mike WARD’s (and that of the Board, the parents and the children).

Pete DWYER simply washed his hands of Mike WARD and abandoned him to ‘free fall’.

What shines through, for me, from that very telling email, is that Pete DWYER was delighted to see the back of Mike WARD – no questions asked. None at all. Just Council-speak for “Good riddance”.

Almost incredibly, Pete DWYER actually copied his Line Manager Chief Executive Officer Richard FLINTON (no less) into the correspondence – and Richard FLINTON also managed to do . . . precisely nothing, leaving Pete DWYER to field any comebacks. That is how it is when you are a £147K per annum big cheese. 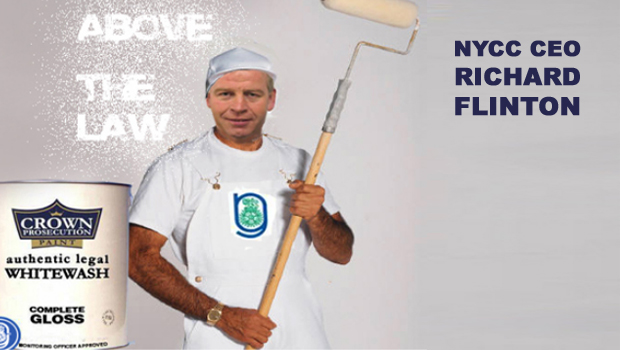 It may not seem worthwhile rolling out the white-wash brigade for a seemingly bigoted Headteacher who appears to have taken leave of her senses, but Mssrs FLINTON and DWYER will now proceed happily to squander  a few thousand pounds the public purse on an underqualified ‘Independent Investigator’ (guided by a fellow federationist member of the NYCC home team) when it comes to protecting themselves and their tattered professional credibility.

Make no mistake; Sue WHELAN’s actions are being investigated by her co-employees in paid service. By contrast, Governors work voluntarily in the public interest.

Unfortunately for NYCC, all of this takes no account of the information passed to me, under a guarantee of strict anonymity, by witnesses –  Eskdale School ‘insiders’ who, like me, have not been consulted by ‘Independent Investigator’ Jane LEWIS, ‘assisted’ by Richard FLINTON’s man-on-the-spot, Harry RASHID Senior HR Advisor of the NYCC Children & Young People’s Services Team.

It is fair to say that Jane LEWIS has been passed a poison chalice.

By omitting the principal witnesses from her ‘Independent Investigation’, and by limiting it to the period following the announcement in the Whitby Gazette of 3rd October 2014 that Mike WARD had joined UKIP, she is constrained to considering only such evidence as lends itself to exculpating Headteacher Sue WHELAN, at the same time taking some of the heat away from Pete DWYER and Richard FLINTON.

Nothing in any of the copious emails exchanges between me and either NYCC or Eskdale School gives any indication that the ‘Independent Investigation’ is remotely concerned with winkling out any ‘prime-mover’ responsible for prompting or orchestrating Headteacher Sue WHELAN’s extraordinary conduct – about which Councillor Ian HAVELOCK, a very shrewd observer and a former teacher and Governor himself, has asked with good reason “Cui bono?” (who benefits?). 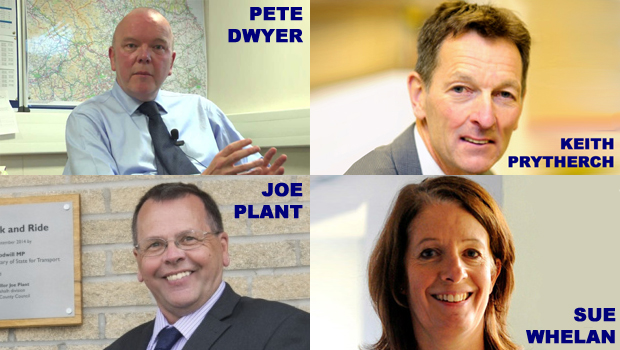 The important thing to remember is this:

Nobody anticipated mild-mannered Mike WARD doing anything other than going quietly away, so as to pre-empt any internal discord with the Board such as would be likely to blunt its commitment to independence and the 11-16 age range. That is exactly what Mike WARD did. That is the man he is. That is what his opponents were counting on – Mike WARD’s innate decency.

It was two weeks down the road, following lengthy discussions with several experienced school governors, before I finally decided to lodge a formal Corporate Complaint against Sue WHELAN, on 27th October 2014. I was moved to do so by Mike WARD’s Letter to the Editor of the North Yorks Enquirer the day before. Nothing in Mike WARD’s openly declared position merits bigotry and discrimination in an way. Hundreds of comments on facebook and other social media sites have supported me in that.

And I felt that only publication by the North Yorks Enquirer, with the foreseeable outcome that it would probably be picked up by the regional and national media – which is exactly what happened, might ensure a thoroughgoingand impartial investigation. So far, that has yet to materialise. Far from it.

But I am now in a position to add to the above list by reporting that Jane LEWIS’s ‘Independent Investigation’ is not even considering an internal ‘putsch’ from within the Eskdale camp, and I do not refer to ‘the caretaker’ – Chair of the Board, Sue VERRILL.

It may of course be that Headteacher Sue WHELAN acted unilaterally and (in her view) in good faith. That does not in any way ameliorate the fact that she acted wrongly – beyond her remit and with political discrimination.

So my investigation continues. I will publish the results when I have seen what sort of travesty NYCC attempts to foist on the wider public – the public whom they are duty bound to serve. Their paymasters. Lest they forget. 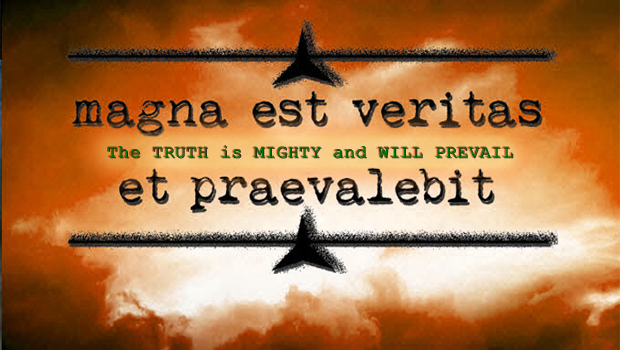