On 2nd December 2020, six days after the consultation period for the ARGOS Planning Application officially closed (26th November 2010), there now appears a further Objection – this time from Scarborough business magnate Mr James CORRIGAN, who, readers may remember, has been tackling the Council via Public Questions in recent months:

It is noteworthy that Mr CORRIGAN has addressed his Objection not only to Chief Planning Officer Marcus WHITMORE,  via the Planning Portal, but also directly to all 46 Scarborough Borough Councillors. Perhaps this explains why an Objection that, strictly speaking, is out-of-time has made it onto the starting grid. Or maybe it is simply that Mr CORRIGAN holds too big a stake in the town’s future to be dismissively brushed aside on an arbitrary technicality.

The thrust of Mr CORRIGAN’s Objection relies not only on the issues already raised (Parking, Size, Inappropriate Appearance and the failure to deliver the long-promised Market/Town Square) but directly references the GRIMSEY REVIEW government guidance on post-COVID town centre regeneration – a long read, but an interesting one. For those who skipped Mr CORRIGAN’s full Objection, the GRIMESY reference reads thus: 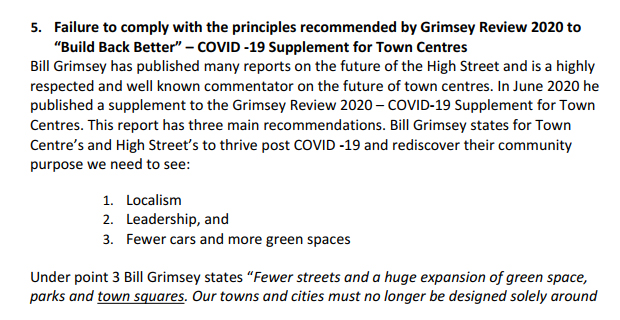 The following summary, in Mr GRIMESY’s own words, will provide readers with a general impression – always assuming that one can overlook the corny three-word slogan ‘Building Back Better’. Personally, I have had a bellyful of politicians reducing complex considerations to infantile digestible-by-the-masses sound-bites like ‘Get Brexit Done’ and ‘Building a Better Borough’. It is patronising and insulting. But in this case, the concept is spot-on. 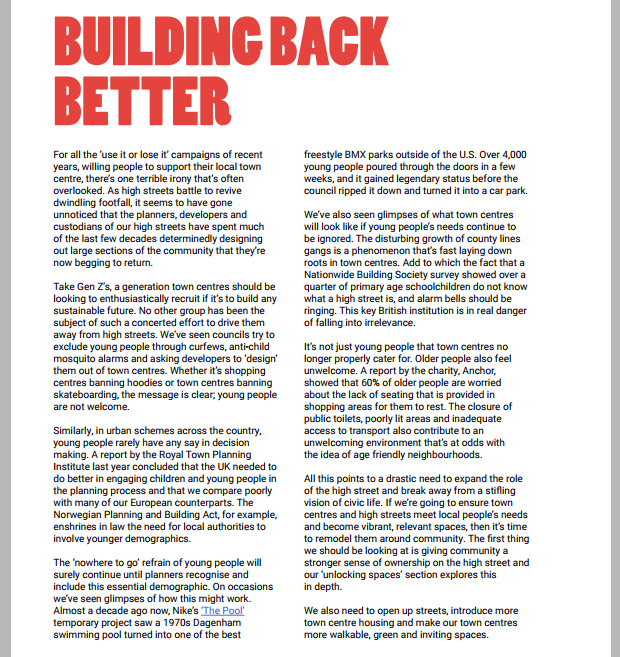 In short, Mr GRIMESY calls for more open spaces, with less retail and less low-end accommodation – the exact opposite of the ARGOS proposal. 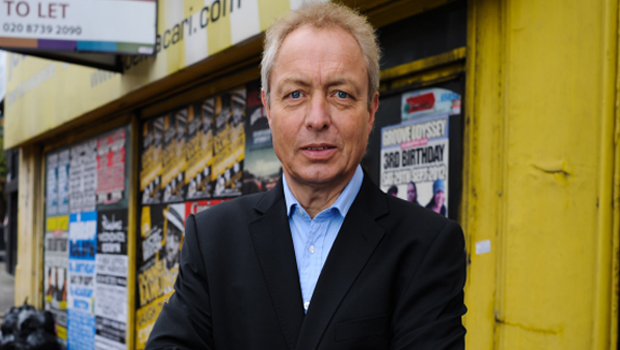 Readers may recall that it was BILL GRIMSEY who appeared, at Commercial Director Richard BRADLEY’s invitation, to address the Overview & Scrutiny Board meeting on Wednesday 8th July 2020. His remarks were minuted thus:

With the permission of the Chairman, Bill Grimsey, businessman, former government adviser and author of the Grimsey review on the state of the high street retail sector addressed the meeting. He talked generically about town centres and their futures at this time and in particularly the effect of Covid-19 on town centres. He spoke of the needs of town centres and three reviews he had undertaken on the future of the high street. The key to his 2013 review was one could no longer rely on the retail position in town centres. He referenced technology and lifestyles moving forward in the future and that Covid-19 had accelerated the decline of town centres as shopping destinations. Online shopping had grown dramatically during lockdown. He referred to his most recent review, which was free to download for the Council and councillors to reference. The town centre needed a plan and good leadership to drive the plan forward and make it happen. He added the reason for the decision should not entirely be based on cost, but driven by a community plan based on localism and quality of life. Scarborough had great heritage, a lovely location, it just needed a plan. Mr Grimsey welcomed and responded to questions from the Board. The Director (RB) added that the presentation he gave to the Board on 3 June was underpinned by the Town Centre Strategy adopted in 2018, which was influenced by Mr Grimsey’s second report.

Note that I have highlighted three comments in bold type.

The “technology and lifestyle” to which Mr GRIMSEY refers includes home study for university degrees – as Coventry University is presently pioneering.

The “plan and good leadership” to which he refers is notably absent and will remain so until the present administration takes cognisance of the obvious fact that it is entirely unfit for the purposes of directing local government.

As to the third of my highlighted passages, I would dearly like to hear the Director (RB) – Richard BRADLEY – provide a coherent explanation as to how, and in what way, the “presentation he gave to the Board on 3 June was underpinned by the Town Centre Strategy adopted in 2018″ was “influenced by Mr Grimsey’s second report”. 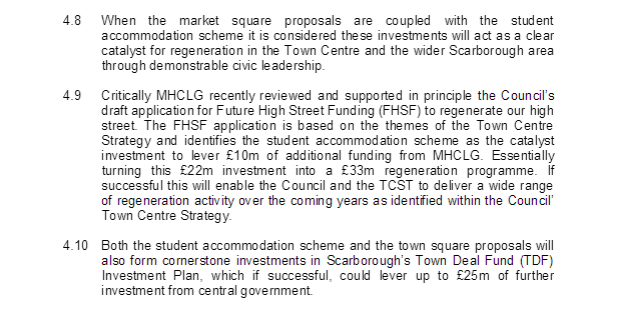 Nowhere can I detect the influence of Bill GRIMSEY in the ploy of tying the ARGOS demolition and regeneration to a proposed Market Square for the purpose of levering £25M out of central government.

Bill GRIMSEY is the man whom Richard BRADLEY holds in great reverence as a gospel-giver on the subject of  the Holy Grail (‘Regeneration’), following his every word on Twitter. Except, of course, when it suits to deviate.

As we know, SBC  CEO Mike GREENE has passed the battle for the ARGOS ‘regeneration’ to the much-travelled Marc COLE. I say ‘much-travelled’ because Marc has bounced around the country for two decades working a minor miracle here and a lesser marvel there. Had he not been head-hunted for his prodigious prowess, one would almost think (and be mistaken) that he has struggled to hold down a job. 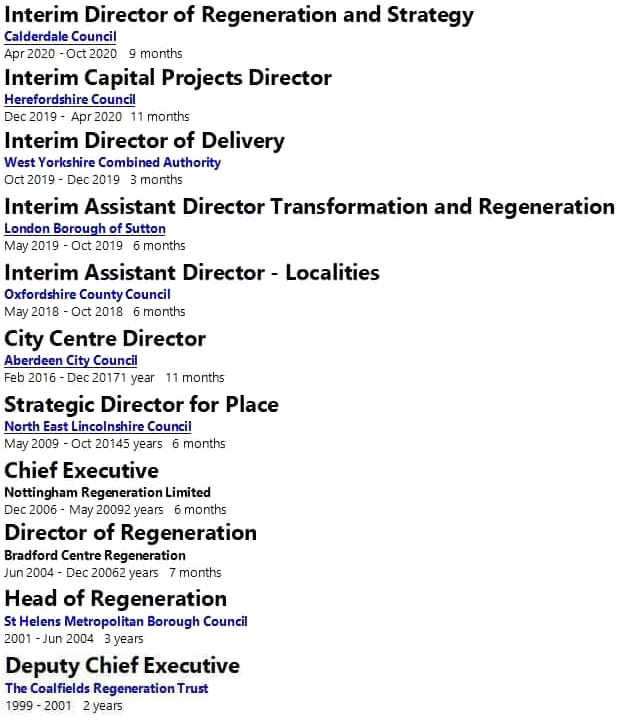 In fact, enquiries around the country have retrieved the consistent opinion that Marc COLE, though not always well-liked, is a very smart guy indeed.

I hope that he is smart – smart enough to recognise that the ideal location for students and nurses to be accommodated is the old COMET building – central, convenient, situated ideally for public transport and with space enough for parking – and the ARGOS site is the ideal location for a Market Square, GRIMESY-style. 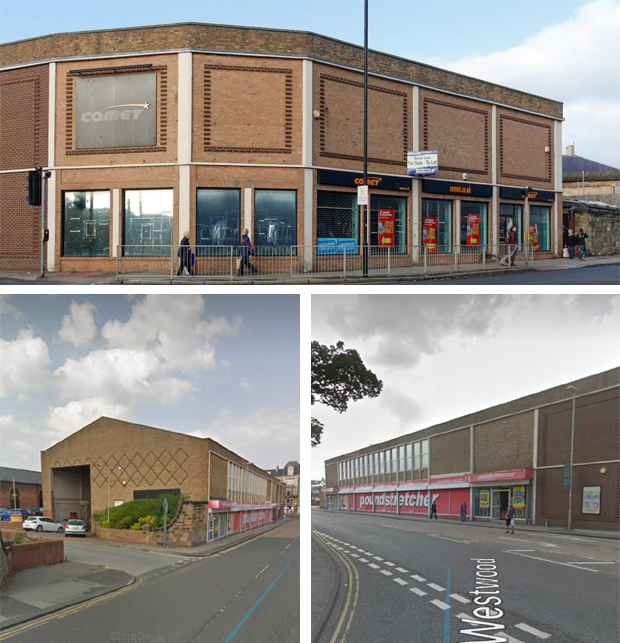 A bird’s eye view of the options makes everything clear: 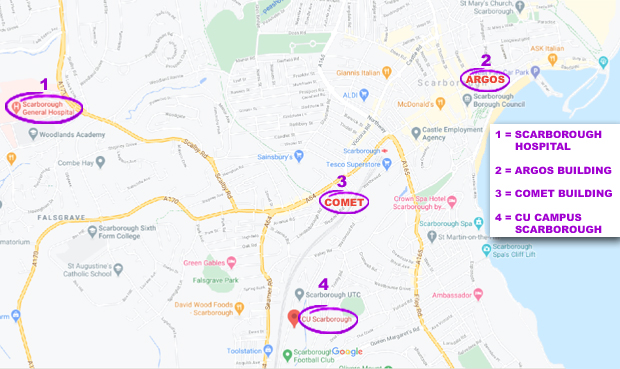