Two sections (distilled from a welter of ‘old news’) stand out as being particularly relevant ahead of the Extraordinary Meeting of Full Council scheduled for Thursday 28th July 2022.

The first of these (s.5.2 and its sub-sections) reads as follows: 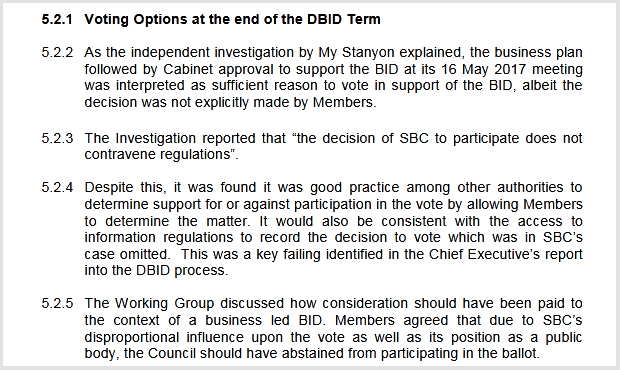 5.2.2 confirms that, without the formal approval of Full Council, Cabinet alone supported the formation of the BID company, but this decision “was not explicitly made by Members”. In other words, it was made by Officers.

5.2.3 confirms that, according to Mr Peter STANYON’s investigation, the Council contravened no regulations. It does not explain under what authority Officers made the decision to participate, when members had not – and still have not.

5.2.4 confirms that Officers are aware that it was not good practice. In fact, the decision to take part in the ballot to establish the BID was never formally recorded. That means that, legally, it never took place – all Council Decisions are required by law to be recorded (minuted). If they are not recorded, then legally, they never took place. Outgoing CEO Mike GREENE has identified this as a “key failing”. Not ‘alf! An unrecorded decision has no legal standing whatsoever.

5.2.5 confirms that the Working Group responsible for generating this Report agreed that, in exercising a ‘right’ to vote that was never approved by Council, SBC should have abstained from voting in the ballot (as other Councils did).

Summarising the above, it is true to say that the ‘Yes’ Vote in the ballot should never have been ratified, having been carried only due to the participation of the Council – ‘authorised’ behind Members’ backs.

In an informal meeting held in Whitby on 18th July 2019, it was made clear to me, in the presence of three former Cabinet Portfolio Holders, that the former Leader was advised by Commercial Director Richard BRADLEY that the casting of Council votes (on behalf of car-parks, toilets and a radio-mast) in favour of establishing the BID company was a mere formality, since the whole issue would return to Full Council in due course. It never has.

Before moving on to the second (and crucial) extract from the Working Group Report, permit me a short FACT CHECK digression, exposing the overpaid liars.

On 6th June 2022, all SBC members were provided with a ‘Confidential’ Briefing Note on the subject of YCBID. The final paragraph referred to the allegations raised by Mr James CORRIGAN through his solicitors, Lupton Fawcett LLP, regarding the huge “procedural impropriety” in the methodology by which SBC/YCBID have handled their VAT obligations:

“Not applicable”? The CEO’s prudence apparently amounts to nothing.

Is it the norm, then, for SBC rogue Officers to disregard the decisions of the (outgoing) CEO? Or is it that they know by now that Mr CORRIGAN and Lupton Fawcett LLP are bang on the money and the last thing Officers need is to see it confirmed by their own external legal advisors?

And now for that second extract (s.5.7 of the Report):

At this point, one may sympathise with Deputy Monitoring Officer Carol REHILL, who appears to have been chucked under the proverbial bus by Mrs DIXON (who, shrewdly, did not attend, and is therefore not directly culpable of misleading the Working Group).

Readers may wish to review for themselves Article 18 of the Business Improvement District (England) Regulations 2004: 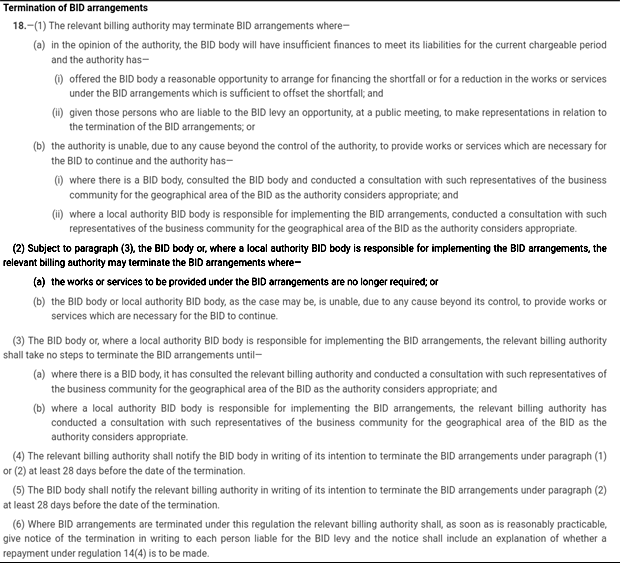 I am a layman. I have no legal qualifications. But English is my first language and when I read that  form of words, I believe I am able to arrive at a clear grasp of the meaning:

“… the relevant billing authority [in this case, Scarborough Borough Council – i.e. the 46 elected Councillors; not some dog-wagging Officer] may terminate the BID arrangements where – (a) the works or services to be provided under the BID arrangements are no longer required”

Hitherto, Full Council has been deprived of any opportunity to vote on the existence of YCBID.

It will enjoy its first opportunity to do so at the Extraordinary Meeting of Full Council on Thursday 28th July 2022, when it considers and votes upon the following Motion:

Can there be any remaining doubt that if the Motion (to wit “This Council has NO CONFIDENCE in Yorkshire Coast BID Ltd”) carries, then it becomes self-evidently the case that, as per Article 18(2)(a), the Council no longer requires “the works or services to be provided under the BID arrangements” – for how could the Council possibly commit to requiring “the works or services” provided by a private company in which it has NO CONFIDENCE?

It then follows, under Article 18(4), that it will be Mrs DIXON’s duty to serve 28 days Notice of Termination on YCBID, whereafter it will be a simple case of “Thank you and goodnight, Clive. Your services are no longer required. Your high-flying bluebird is now a dead duck”.