A Letter to the Editor from BRIAN MATHEWS, responding to NIGEL WARD’s widely-read report “YCBID: The Reckoning [Part One]” and adding some further observations.

On your recommendation, I have watched the Council meeting regarding the Yorkshire Coast BID: http://nyenquirer.uk/ycbid-the-reckoning-part-one/ .

Firstly, I too must add my congratulations on a well run meeting by the Chair (especially in the circumstances) and totally agree that Councillor Backhouse is definitely a Council Leader-in-waiting.

The report has answered the bits about the Council’s Electoral Team and the explanations as to how people knew ballot papers had, or had not, been received. It might not have been illegal but it was certainly 100% against the spirit and ethos of a secret ballot. Mr Edwards’ Recommendation #2, which wasn’t accepted, seemed to be there only to try to sweep away a problem that the Council has, of its own making, created. Along with others, I look forward to more of this proper reporting as to how the process progresses.

About 13 minutes in, Mrs Dixon said there have been no meetings with YCBID. Unbelievable! I would not like to think how much Council Officers’ time has been spent on trying to sort out the ‘Cock Up’ that is Yorkshire Coast BID. The phrase ‘Time is Money’ is very relevant and not only have wages been lost, but all money collected and paid over to YCBID will have to be paid back to the levy-payers, as it is a Council initiative. Also, other items the Council needs to attend to will have been deferred because time has been wasted on this White Elephant. In addition, according to the Agreement between the BID Company and the Council, two formal meetings should have taken place already by the point the Covid-19 pandemic stopped everything in its tracks.

From Mrs Dixon’s tone of voice and the body language of the other Officers at the virtual meeting, there was surprise and exasperation from Officers as though the cover-up had been found out.  If I had a £1m a year contract on the go, I would be undertaking 1-on-1 meetings on progress against specific and measurable items, on a weekly basis.

The point where Ms Carruthers speaks just shows what a shambolic outfit she leads and the fact that neither Mr Rowe-Evans nor Mr Aswat came in to help her out again suggests that, initially, they had vested interests in getting the BID through, even while Mr Rowe-Evans was leading the formation arm of the Council. I don’t know what salary these people are on but if they worked for me, they would not be around now. On a performance-related pay rate, their value is £nil.

The discussion of meetings for meetings’ sake reminds me of this. 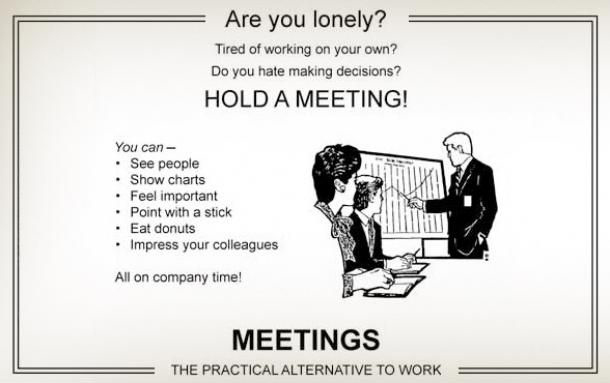 The formation team appears to have deliberately kept information away from the potential levy-payers when Redcar and Cleveland Council did not see any benefit for their Business Rate Payers and they pulled the whole idea.  It wasn’t explained in the Official Business Plan document that the area had changed from the previous version and we must presume that is why the map was deliberately left out to avoid any awkward questions.  At that point, the whole lot should have been pulled, never mind deferred for 15 days. The Electoral Team were apparently misled in the way they were to keep the gravy train money flowing for the financial beneficiaries of the scheme.

Finally, if the BID cannot be shut down by the Council, then the Directors should take the easy option of voting to fold the business as it was wrongly formed by the Council as Principal and pass the problem back to them to sort out returning whatever is left of the £800,000+ already collected [Source https://www.yorkshirecoastradio.com/news/local-news/3030490/363-firms-in-scarborough-still-to-pay-d-bid-levy/ Statement given by Yorkshire Coast BID].

Unfortunately, it seems that all Council Rate Payers will have to pick up the wasted difference on the whole debacle as levy-payers are not liable. No one wants to be a Director of a Company that has been formed to scam its levy-payers, especially as they do not benefit from the pool of cash created. The Council has a duty to the levy-payers and as they created the problem, financially it is them who must now refund everyone.

It is the same for East Yorkshire Council, too.

If YCBID had an ounce of integrity, they would be lobbying the Council for a re-ballot. They must know they would lose.