As the ‘Great Yorkshire Parking Scandal’ debate gathers momentum, a Yorkshire Post article published on 29th September 2015 under the caption “‘Disgraceful’ – Police under fire for refusing to refund wrongly-issued parking tickets” has been finding new currency.

The thrust of the article is that the West Yorkshire Police (WYP) has determined not to refund £485,000 for around 16,000 parking tickets issued without a legally enforceable basis, going back to 2006. Naturally enough, this information aroused considerable disgruntlement – and not only amongst those who had been parted from their money on an illegal basis.

But the following remarks, attributed by the Yorkshire Post to the WYP, raise the matter to a different and higher level:

I would contend that this statement has very serious legal implications. Very serious indeed.

Is WYP suggesting that if motorists had (precognitively) elected to “challenge the validity of the tickets”, they would have received refunds?

How else are we to understand the further statement that:

“If however motorists elected to pay the penalty they effectively accepted having committed the offence and opted out of the court process, thereby waiving their right to contest the matter”?

Is this not another way of saying that motorists were placed in the position of being deemed guilty unless they could prove their innocence?

Surely, this flies in the face of the presumption of innocence – the principle that one is considered innocent until proven guilty? [Article 6 of the ECHR].

As one public commentator on the Yorkshire Post web-site puts it:

Let us consider this in a wider context.

Supposing I wished to attend, with friends, a certain event (say, a Bob DYLAN concert) – an al fresco concert at Roundhay Park in Leeds, for which tickets are not only expensive but difficult to obtain.

Let us assume that I have been lucky enough to be offered some tickets (perhaps on the internet) to see Bob DYLAN.

And when my friends and I (hypothetically) arrived at the entrance facility at Roundhay Park, we learned that our tickets were not valid. (Perhaps they carried incorrect or misleading information).

Naturally, I would go to the West Yorkshire Police to report the fact that I had paid real money for invalid tickets – I had been swindled; I was the victim of a fraud by false representation. (The recipients of WYP PCNs paid real money for invalid tickets). And, equally naturally, I would hope and expect the fraudsters to be arrested and prosecuted.

Am I now to understand that the view of the West Yorkshire Police would be that since I “chose to pay” at the time, and since I did not “challenge the validity of the tickets”, in some sense I had no-one to blame but myself? I was not the victim of a fraud at all?

The analogy is imperfect, of course – but nevertheless, motorists in West Yorkshire have collectively been ‘fined’ to the tune of almost half a million pounds – ‘fined’, that is, with no legal authority. They had no means to determine whether or not the tickets were valid and thus had no basis on which “to challenge the validity of the tickets”. They parted with real money; the tickets had no validity.

The motorists are guilty of nothing – unless it is an offence for them to have failed to “challenge the validity of the tickets” – tickets whose appearance offered not the slightest indication of their invalidity. They are innocent victims who have been ripped off.

Yet, despite their innocence, these motorists have paid their ‘fines’ exactly as though they were guilty of something (‘illegal’ parking) – which they were not.

Taking the analogy to a wider application, where does this leave those who have been ‘mis-sold’ insurances/double-glazing/solar-panels/resurfaced-driveways/whatever – and who knows how many other inadequately documented products and services? 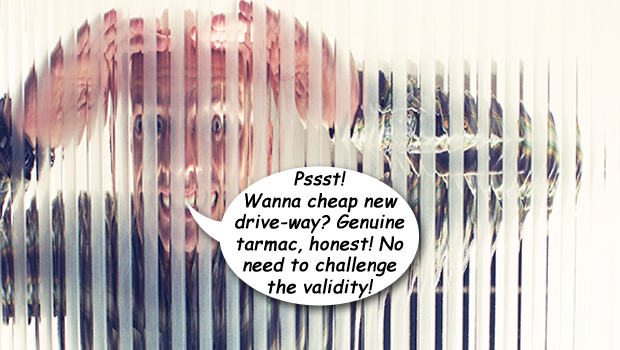 Will the West Yorkshire Police decline to prosecute all such swindlers on the grounds that the victims have only themselves to blame, having failed to “challenge the validity” of their contracts at the time?

Or is WYP a ‘special case’?

Is this the way they conduct policing in West Yorkshire? All fraudsters will be prosecuted – except the Police?

And have I just incurred the waste of three-quarters of a million pounds of the public purse that the West Yorkshire Police is about to squander on a legal action against anyone who questions their conduct – namely, me –  claiming that by asking these impertinent questions I am breaching the terms of the Protection from Harassment Act 1997 by causing untold anxiety and distress to the (T) Chief Constable and/or her Deputy and sundry less important cohorts, on and off the force? Who can say?

By the way; I do not run a car. No undeclared personal/prejudicial or pecuniary interest here, folks. Just expressing the views of one who believes that we must all be equal under the law.

So I have written to Chief Constable Dee COLLINS of the West Yorkshire Police, asking her to reconsider:

May I refer you to my article on the North Yorks Enquirer, here.

I write to offer you an opportunity to comment publicly on the ideas expressed in my article.

It comes at a time of considerable furore over the unjust pursuit of parking fines contingent upon incompetently administered parking regulations by public authorites throughout (and possibly beyond) the whole of Yorkshire.

In my view, it is surely morally reprehensible in the extreme for the West Yorkshire Police to refuse to return the money paid in good faith by motorists in West Yorkshire who were unaware that the documents affixed to their respective windscreens had no legal validity and were therefore unenforceable.

Your spokesperson’s assertion (as reported in the Yorkshire Post under the title “‘Disgraceful’ – Police under fire for refusing to refund wrongly-issued parking tickets”) that “they [motorists fined under the invalid tickets] would not be entitled to refunds as they “chose to pay the fine at the time” and did not challenge the validity of the tickets“ has provoked widespread disgust and disappointment. It raises some very serious concerns regarding the ethical framework of the West Yorkshire Police. The rationale expressed by your spokesperson bespeaks a poor grasp of the concept of fairness.

I would like you to reflect at length on the message that the statement transmits to motorists, taxpayers and the wider public, who (by and large) support your Force, both financially and in principle, and who look to the West Yorkshire Police to serve and protect and, above all, to do so without fear or favour, treating all transgressors of the law alike.

Whether or not WYP’s refusal to repay the money – money exacted under the ostensibly false pretence that the integrity of the parking tickets was irreproachable – meets the Code Test for fraud by false representation is only one consideration. More important is it that the public perception (that no honourable Police Force would ever embark upon a course of conduct that could, even for one moment, arouse suspicion of criminality) is restored.

I hope you will be so good as to provide me with a short statement reassuring the public that fines paid in good faith, though in error, will be refunded in the coming weeks – or, failing that, a plausible justification for withholding the money. Thank you.

I promise to communicate your words to my readers during this season of goodwill.