Following a unprecedented volume of web-traffic visiting the North Yorks Enquirer in the wake of a series of articles by columnist Tim THORNE and guest author Andy STRANGEWAY, covering the disastrous mismanagement of on-street parking signage in Controlled Parking Zones (CPZs) in a number of towns in North and East Yorkshire, the Scarborough News has today (10/12/15) published an article under the by-line of Ian JOHNSON, thus carrying the story to residents who still rely on print media for their local/regional news.

This follows coverage in most of the national newspapers earlier in the week, outlining the shocking news as announced in a Royal Automobile Club (RAC) 2015 report, that Councils throughout the country have made a massive £700,000,000 PROFIT on the administration of parking in the last financial year alone.

As explained in the Daily Mail coverage on Monday 7th December 2015:

County, Borough and District Councillors and members of the public are now demanding to know how and where this so-called “surplus” has been spent – with good reason, because the next question will be:

Having just failed to get through to you by telephone, could I ask you please to see if you can organise a statement for me on the matter of the shortcomings in signage of some of the Controlled Parking Zones throughout the County?

The Scarborough News  has picked up on the series of stories run by Tim THORNE and myself at the Enquirer and I am now fielding calls and emails every few minutes from members of the public (and Councillors) asking where the buck stops on the matter of potential refunds against permits and PCNs that, as it turns out, are not legally enforceable. Essentially, I need to be able to let readers know to whom requests for refunds should be addressed.

I regret troubling you with this, but I know I can rely on you to put me in the picture. A short statement would clear that up in a stroke.

Robert GOODWILL MP [Con.] (Scarborough & Whitby) was appointed as Minister of State at the Department for Transport on 9th December 2015.  So I have emailed today to solicit a comment from the highest local source:

The purpose of my email is twofold:

Firstly, I would like to congratulate you on your appointment as Minister of State at the Department for Transport on 9th December 2015. Bravo!

Secondly, I intend to publish a further article on the subject of the burgeoning row about the “illegality” of the signage for the Controlled Parking Zones throught your constituency. For your convenience of reference, I include the following URL-links:

Could I ask you, please, to provide a comment to include in this evening’s article?

I thank you in confident anticipation of your definitive word on this topic ahead of my press-deadline of 7:00pm this evening.

At the time of publication, I have heard nothing from Robert GOODWILL MP.

Of course, I was not anticipating an expression of total confidence that the legalities had been duly observed by the well-qualified (and highly paid) Council Officers who oversaw the implementation of the CPZs in North Yorkshire, in whom we  place our trust – or that every motorist who has been wrongly penalised would be duly reimbursed.

Even so, no response from either our top County Legal Officer or our Minister of State for Transport is extremely disappointing – however predictable. 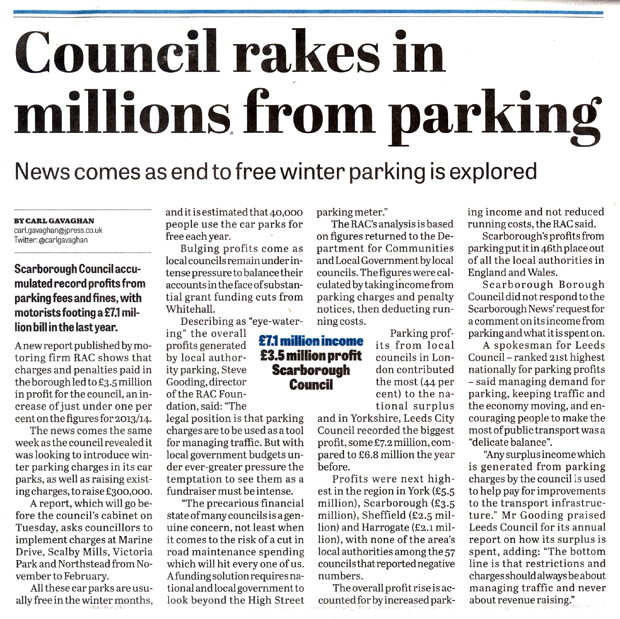