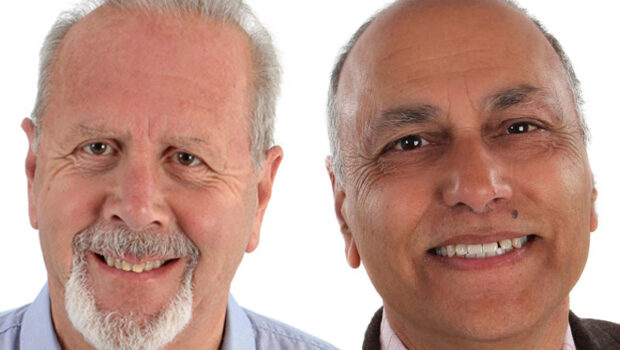 Of all the many ‘scoops’ published under the North Yorks Enquirer banner in recent months – and there have been many – three stand out as having particular significance as we approach the third Vote of No Confidence in SBC Leader, Councillor Steve SIDDONS, next Monday 17th January 2022 – to be conducted ‘remotely’, via Zoom:

The first of these exclusive exposées dealt with the fact that, at the meeting of the Planning & Development Committee held on 9th December 2021 to decide on Applications for (i) the demolition and subsequent rebuild of the former ARGOS building, and (ii) the demolition of the shop and maisonette at 1 St. Helen’s Square, four Labour Councillors (Cllrs Subash SHARMA, Rich MAW, Stuart CAMPBELL and Theresa NORTON) neglected to declare their acquaintance with the owner of the maisonette, Mr Paul David CROSS, who served as a Labour Councillor until May 2019. To my understanding, this acquaintance amounts to a personal and prejudicial interest.

In the case of Councillor Subash SHARMA, this failure to disclose was particularly questionable because not only was he (a) Chair of the Planning & Development Committee (and should, therefore, have led by example), and (b) he had previously declared his personal and prejudicial acquaintance with Mr CROSS at a meeting of the Overview & Scrutiny Board (on 8th July 2020).

The same article also addressed the Leader’s failure to disclose the same personal and prejudicial acquaintance when making his Leader’s Urgent Decision to secretly purchase the shop and maisonette at 1 St Helen’s Square.

It will come as no surprise to readers that this motion was ‘disallowed’ by s.151 Finance Officer, Mr Nick EDWARDS, in his capacity as Deputy Chief Executive, acting in the absence of CEO Mike GREENE (who was enjoying a seasonal vacation in Ireland at the time). That Mr EDWARDS should ‘disallow’ the motion may be considered as his attempt to protect Monitoring Officer Lisa DIXON from potential sanctions.

What Mr EDWARDS may not have anticipated, however, is the number of emails received by various elected members from members of the public enquiring how it could be possible that such apparent breaches of the legal requirements (as set out in the Localism Act 2011) could conceivably be permitted and asking what action Councillors proposed to pursue.

The third exclusive article concerns the matter of the acquisition of Pavilion House and Comet Corner – a matter which I will return to presently.

One particular reader (who happens to be a long-serving North Yorkshire County Councillor sitting in another part of the County) sent me the following link to an article about corruption within the Planning process:

The above Transparency Report on Planning matters at local authorities concludes with the following observation:

“We judged these authorities on how well their policies and procedures matched up to good practice standards we developed using the evidence from our research, and which build on existing work by the Local Government Association and the Committee on Standards in Public Life.

Now that CEO Mike GREENE is back at his desk, I would have expected some movement on the above matters; they are far from trivial.

Indeed, I have now learned, from a former SBC employee who remains in extremely close contact with erstwhile colleagues at the Town Hall, that CEO Mike GREENE has now referred the matter of the non-disclosure of interests by the Leader and four of his Labour Group colleagues to the Standards Committee (which, I suspect, means to the Monitoring Officer and the so-called ‘Independent Person’, no doubt at a very leisurely pace) for full investigation. Should this investigation confirm that potentially criminal acts have taken place, the Monitoring Officer will be obliged to refer the matter to the North Yorkshire Police, as she did in the case of former-Councillor Tim LAWN [Con.], following an intervention by the Enquirer, back in its Real Whitby Magazine incarnation – as covered by Private Eye: 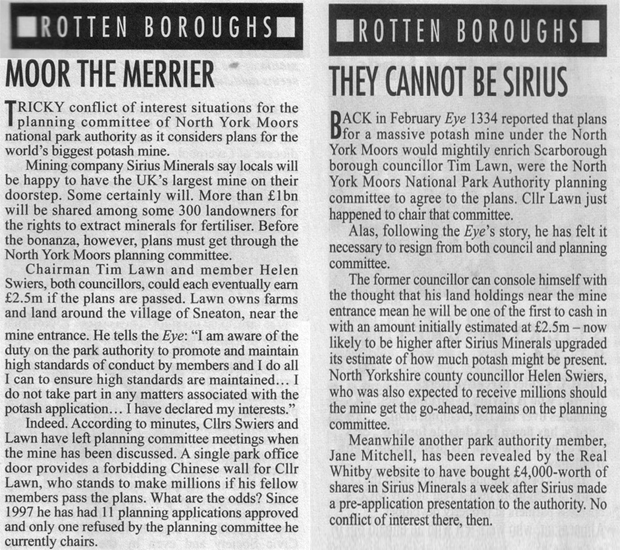 To the best of my knowledge, a THIRD Vote of No Confidence against a Council Leader, in the space of two years, is unprecedented. Added to this, we now have the prospect of a Council Leader potentially facing a Police investigation over a serious breach of the Localism Act 2011.

But there is another twist to the tale.

Councillor Subash SHARMA [Lab.], Chair of the Planning & Development Committee, who, not so long ago, narrowly escaped censure for using the F-word in a meeting, has assumed a far more prominent role in the Labour Group, having spoken in strong support of the widely-despised ARGOS ‘regeneration’ project. A former Labour member now tells me that this is part of a carefully-laid Labour contingency plan to drive forward the Labour ‘Spend, Spend, Spend’ agenda, even in the event that Councillor SIDDONS loses the Leadership next Monday.

Should that happen, it will be open to all members to stand for the Leadership. There could be any number of candidates – a so-called ‘beauty contest’. Some Councillors have already indicated their intentions, albeit privately.

What an embarrassment it would be for Labour if Councillor SIDDONS were to be defeated and Councillor SHARMA were to throw his hat in the ring for the Leadership. That would suggest that both an outgoing Leader and his would-be replacement might share the embarrassing distinction of being under investigation for potentially criminal wrong-doing.

At present, these eventualities remain the subject of speculation, but of one thing I am absolutely certain.

If I were a member of this Council (of whatever political persuasion) – particularly as Chair of one or other of the Overview & Scrutiny Committees or the Audit Committee – I would be demanding sight of the full file of due diligence history in respect of the acquisition of 1 St Helen’s Square.

My understanding is that it is good practice – virtually de rigeur and perhaps even a legal requirement – to have obtained two independent RCIS valuations to ensure (and demonstrate) that the Council (i.e. the ratepayer) would be obtaining ‘value for money’. Of course, any shortcomings in the due diligence history may have an impact on whether not non-disclosure of interests in the transaction could be elevated to a criminal offence. To have failed to declare an acquaintance is one thing; to have paid ‘over the odds’ to an acquaintance would look very sleazy indeed.

The same applies to the due diligence history of the acquisition of Pavilion House, at a price that the Council has itself described as ‘premium’.

Call me old-fashioned, but I am unclear as to how ‘value for money’ might be deemed compatible with ‘for a premium price’.