Once again, I have been perusing WhatDoTheyKnow.com, where I found a fascinating FOIA Request lodged by Mr James CORRIGAN on 5th June 2022, together with SBC’s Responses (dated 4th July 2022) to two out of the three Questions posed by Mr CORRIGAN:

2. Please confirm the number of individuals who have received a custodial prison sentence following a failure to comply with a Liability Order issued by a Magistrate in relation to an amount due to Scarborough Borough Council for unpaid Council Tax, National Non Domestic Business Rates or BID Levy in the last 6 years, specifying the number in each category (CT, NNDR or BID) separately for each year.

This confirms that threats of imprisonment made against those businesses who have refused to pay the YCBID Levy were hollow – nothing other than a brazen attempt to intimidate :

This is distasteful but relatively trivial. But the Response to the third of Mr CORRIGAN’s questions is of far, far greater consequence:

3. Please confirm if the Council has sought external advice on whether it is an “Agent” or “Principal” in its contractual relationship with Yorkshire Coast BID Limited as set out in the Operating Agreement dated 31 July 2019.

The Council has not received external advice on whether it is an “Agent”or “Principal” in its contractual relationship with Yorkshire Coast BID Limited.

This, the third of Mr CORRIGAN’s questions, deserves especially close attention. The contractual significance of the distinction between Principal and Agent is crucial; it determines who is working for whom. It determines who invoices whom – and readers of my Open Letter to ERYC CEO Caroline LACEY and SBC CEO Mike GREENE will have enjoyed benefitting from the professional advice of one of the finest law firms in the country.

Readers who are interested in following the path of Mr CORRIGAN’s investigations into the mismanagement of affairs between SBC and YCBID Ltd could do worse than examine the following WhatDoTheyKnow.com entry:

On Tuesday 7th June 2022, in response to information published in the North Yorks Enquirer, announcing a call for an Extraordinary Meeting of Full Council to examine the full legal and financial implications of the Council’s relationship with Yorkshire Coast BID Ltd, Scarborough Borough Council distributed a ‘Confidential’ two-page Members’ Briefing Note to all 46 Councillors. The final paragraph is reproduced below and the full document may be reviewed here;

The phrase under-lined in red contains a measure of ambiguity.

Whilst accepting that the SBC Chief Executive may indeed have “deemed it prudent” – and granting that, in my view, it would indeed be prudent – it seems that no “external advice to further clarify the VAT” was actually sought – at least for the following three weeks.

How can we know this?

Someone is being “economical with the truth”.

Of course, it would be hasty to presume that the Officer at SBC with whom Mr NEILSON conferred was lying; it could also be possible that Mr NEILSON’s statement was itself a lie. Who knows?

2. It is a clear principle that if the Council collects the Levy as Agent for YCBID, then the Levy is automatically belonging to YCBID. This means that YCBID does not provide a service to the Council and is not therefore eligible to be VAT-registered.

3. If YCBID is VAT-registered in error, then the invoices it has issued to SBC and ERYC, charging VAT, have been raised in error and are invalid. SBC and ERYC have reclaimed this VAT from HMRC. If it shouldn’t have been charged, then it will have to be repaid to HMRC. Of course, will SBC and ERYC be able to recover this from YCBID?

Now let me return, for one brief moment, to the minuted Public Questions addressed at a meeting of the SBC Audit Committee almost two years ago on 23rd July 2020. The following excerpt is of special interest:

This was two years ago, remember, and it was very clear, even then, that the Council had completely misinterpreted its contractual position.

In respect of the agreement entered into by the Council with Yorkshire Coast Bid, the Council collects the levy on behalf of the company and is therefore the company’s agent in law.

On 5th July 2022, the following FOIA Request/Response was released, casting further doubt on Officers’ grasp of the Operating Agreement. We now learn that SBC has been charging YCBID for collecting the Levy on its behalf – to the tune of over £27K per annum – AND charging VAT on the transactions: 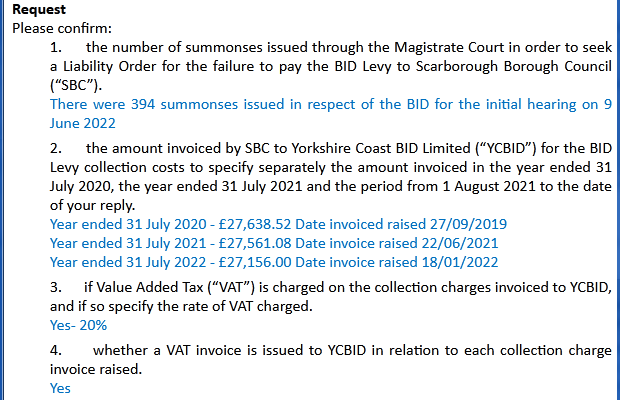 The Response to Q2 confirms the Council’s error – the Operating Agreement(s) require that the costs of collecting the Levy must be deducted from the total sum collected before the balance is passed on to YCBID.

Incidentally, those collection costs (£27K p.a.) are by no means trivial. No wonder the Councils have been so enthusiastic in their support of YCBID – it is a very nice little earner.

Meanwhile, due to what SBC describes as a “miscommunication”, 394 Levy refuseniks have been summonsed by SBC to a hearing (a telephone hearing) at York Magistrates’ Court at 2:00 pm on Thursday 7th July 2022, and a whole load more by ERYC at Beverley Magistrates’ Court at noon on the same day.

Miles and miles of red tape, tied in a Gordian knot . . .

What now seems certain is that someone in Paid Service is either lying or has no clear understanding of the Operating Agreement and/or its concomitant VAT implications.

This conclusion may come as less of a surprise to SBC Councillors than those at ERYC. What is certain is that it raises some interesting questions that members of both Councils should and MUST ask.

Try these, for starters.

If Officers of Paid Service of both Councils are confident that they have acted correctly and in accordance with the terms of the contracts (Operating Agreements), why the perceived need for issuing conflicting statements about the external VAT advice?

Are the Officers simply so arrogant and vainglorious that they cannot admit to having misinterpreted the Operatings Agreements?

“Admit nothing; explain nothing; and never, ever apologise!”

Without giving Councillors sight of any “external advice” sought by Officers – and, equally importantly, the terms of reference specified to the provider of the “external advice” (i.e. sight of the advice and the precise form of the questions asked in seeking that advice), how can members fulfil their democratic duty to vote on a Motion of No Confidence in Yorkshire Coast BID Ltd?

Without sight of that exchange, Councillors are left to assume that the only external advice the Council has ever received on the establishment of YCBID was the original presentation by the Mosaic Partnership – who clearly had a vested interest in progressing the BID. It is now confirmed that the Councils, too, have a vested interest.

If I were a Councillor, I would be demanding sight of the entire correspondence record between the respective Councils, the Mosaic Partnership, YCBID, HMRC and any other professional party whose advice has been sought and received.

Referring to the Conclusion provided in the private sector legal advice: 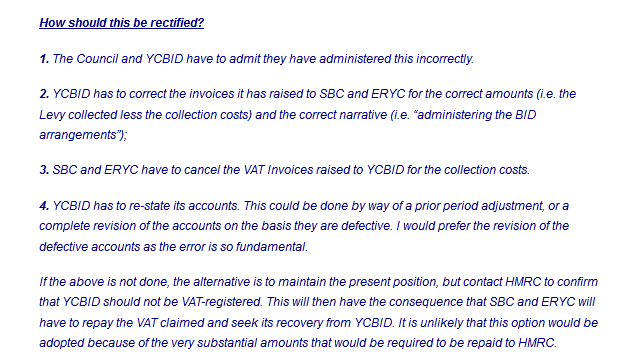 . . . would it be “prudent” for Councillors to task Officers with producing a Risk Matrix, including estimates of the likely range of liabilities arising from Officers’ misinterpretation of the Operating Agreement(s) and the concomitant VAT implications?

The problem with these Questions – which members of both Councils have a duty to resolve – is this:

How  can Councillors be sure that Officers will tell them the truth?

The YCBID crisis in the national news: 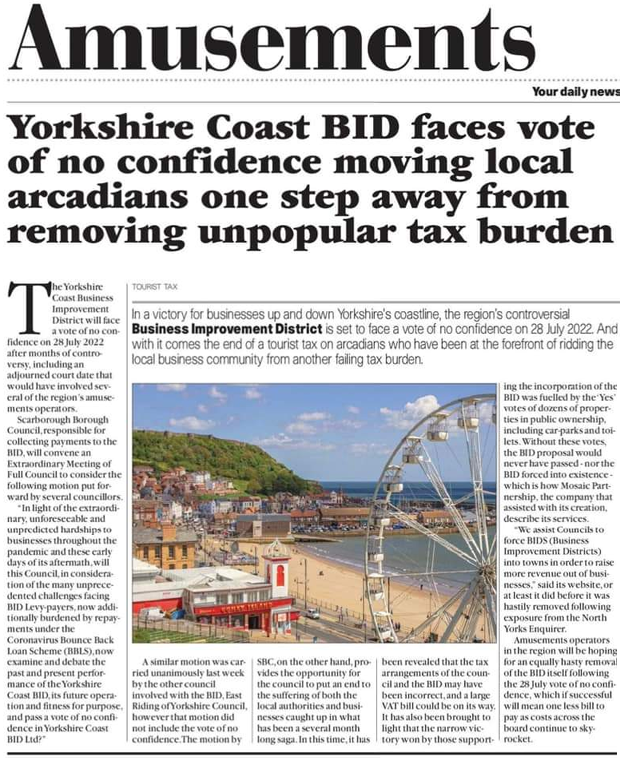