If anyone is mentioned in an article and does not agree with the views expressed in it, or wishes to correct any factual inaccuracy, the NYE will always consider their views and publish a correction if appropriate.

In April 2020, the NYE ran an article criticising Deputy Chief Constable Phil Cain of North Yorkshire Police (NYP) (pictured below) over a non-essential journey to Scarborough Police Station to attend a retirement ceremony for a long serving member of Police staff.

The article was picked up by Private Eye, which subsequently ran a short article on it which can be seen below.

In this Yorkshire Live article by Victoria Sheer, DCC Cain calls the Private Eye article and, by implication, the NYE article, “irresponsible journalism” on the basis that (quote):

The “two idiots” headline is from regional newspaper not me. 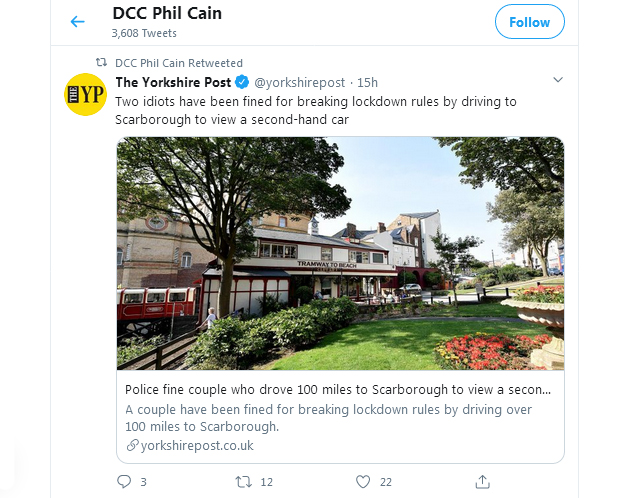 DCC Cain did not contact the NYE with his concerns and we only learned of his comments by chance. However, the NYE has nevertheless considered them and would comment in response that:

(i) An unnecessary journey.

(ii) Does constitute a retirement ceremony.

The overall conclusion is inescapable that this was a non-essential journey and that by undertaking it; DCC Cain demonstrated bad judgment, may have committed an offence and endangered the health of his subordinates, and publicly undermined the official advice to cut down on unnecessary journeys.

The implications for journalism of the Yorkshire Live article

The Yorkshire Live article has some wider ethical implications for journalism.

Compare the coverage of the NYE and Private Eye to the Yorkshire Live article.

The Yorkshire Live article does not question, enquire, or hold DCC Cain to account. It does not challenge DCC Cain’s version of events. Ms Scheer ignored blatant weaknesses in his rebuttal and simply published DCC Cain’s defence without comment.

Further, no attempt was made to obtain a comment from Private Eye or from the NYE.

This is not journalism.

It is not the role of journalists in a democratic society to act as an unquestioning mouthpiece for public servants and public bodies that have been subjected to well-founded criticism. I cannot ever remember an occasion when a public servant that has been accused of misconduct has been given a platform on a reputable publication to deny it, without any form of analysis or opposing view. The article is a very poor and unethical piece of journalism and Ms Scheer should be ashamed of it.

Nevertheless, I am grateful to her for publishing it. Her article demonstrates why so many readers have abandoned the mainstream media and turned to alternative media like the NYE. So they can obtain incisive, informed, journalism on controversial subjects.

The favouritism shown to DCC Cain is a disgrace. He is a public figure in a position of leadership in a crisis and the public expect that people in this position will show leadership by example. Witness the furore over the allegations against Prime Minister Boris Johnson, who is only a politician. The public expect a much higher standard from the Police, particularly from Chief Police Officers.

It should be said that a complaint was made about DCC Cain over this matter to NYP.

In London, even a person as powerful as the Prime Minister has been made the subject of an investigation over allegations he has breached the Covid regulations. Yet in North Yorkshire, the Chief Constable has de facto given all her Police Officers exemption, by suppressing all complaints, while encouraging them to prosecute members of the public for committing the same offences.

A clear double standard that the public are outraged about. So why is the standard of accountability so much lower in North Yorkshire than it is in every other part of the UK? In my opinion, there are two reasons. These are: 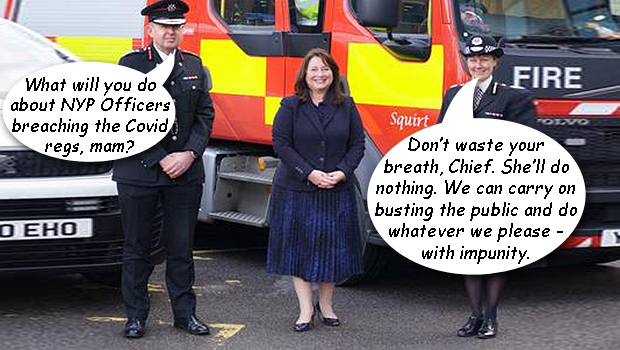 The NYE will continue to raise this issue as a lone voice in North Yorkshire.

A draft of this article has been sent to DCC Cain and to Ms Scheer. At the time of being sent for publication, no response has been received from DCC Cain.

However, the content editor for Yorkshire Live did respond:

“As stated in our Complaints Policy, we will only consider complaints that are made within one year of an article first appearing online. In light of this, we are unable to assist you with your complaint.”

The NYE will publish any response we receive from them and issue a retraction and apology if appropriate. In the meantime we will let our readers consider the facts and form their own opinions.

If you become aware of a public figure or Police Officer breaching the lockdown regulations, please photograph or video him or her and make a note of the:

So if you do photograph any Police Officer(s) breaching the regulations, we think it may be unwise to say they have been photographed and you are claiming the NYE reward on them.