“How far short does Whitby Town (Parish) Council fall of the standards of transparency and accountability demanded by the Rt. Hon. Eric PICKLES, Secretary of State for the Department for Communities & Local Government (DCLG)?”

In the first year of the Parliamentary term that has now drawn to its close, Eric PICKLES had this to say on the subject of the Freedom of Information Act and its impact on two of the Seven Nolan Principles of Public Life – Transparency and Accountability:

“If councillors and council officers are to be held to account, the press and public need access to the information that will enable them to do it. If town halls want to reduce the amount they spend on responding to freedom of information requests they should consider making the information freely available in the first place. The simple act of throwing open the books, rather than waiting for them to be prised apart by the force of an FOI, might even save a few pounds in the process.”

Recently, readers local to Whitby have been asking about the extent to which Whitby Town (Parish) Council (WTC) has complied with this guidance from the Minister.

Some of the better Town (Parish) Councils publish Disclosure Logs on their web-sites, listing FOIA requests and responses – usually on a monthly basis.

Obviously, I have no access to the complete record of Freedom of Information requests submitted to WTC (although I could submit an FOIA request to WTC to elicit that information, though that would take time – perhaps years).

What I can offer is the record of Freedom of Information requests submitted to WTC through that very useful public service web-site WhatDoTheyKnow.com – admittedly, a relatively small sample, but one that tells its own story. 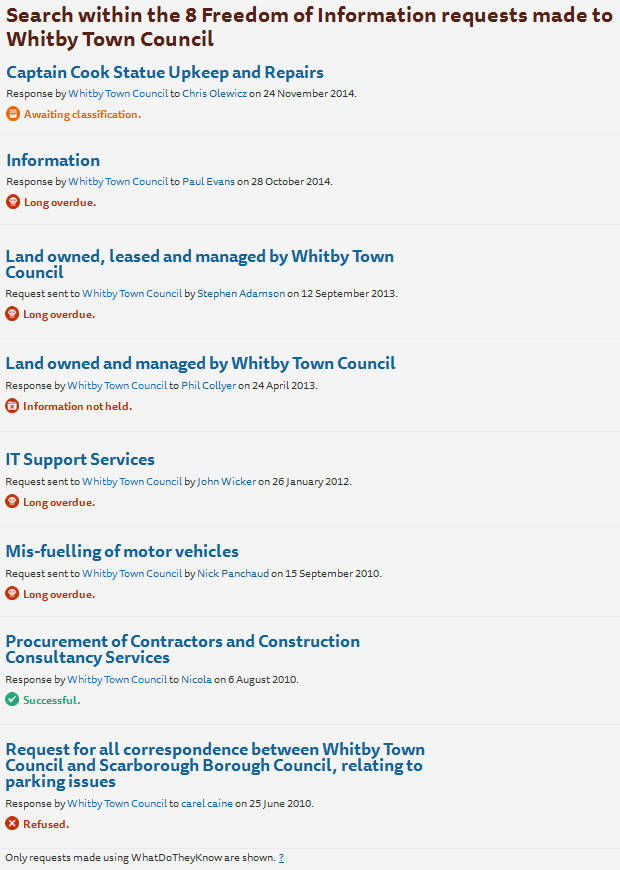 One successful request out of eight (12.5%). Conversely, seven out of eight failed to elicit the requested information – a failure rate of 87.5%.

How would I characterise WTC’s performance?

It is important to remember that the duty to respond to Freedom of Information requests rests not with the Councillors but with the Clerks – the paid public servants (who between them ‘absorb’ over 70% of this Council’s £230K p.a. Precept).

Are the Councillors aware of the Clerks’ reluctant, uncooperative, secretive, abysmal and not fit for purpose performance in respect of Freedom of Information requests?

Do any of them appreciate that it runs counter to transparency and accountability?

I have recently been ignored (thrice) by Chair of the WTC Human Resources Committee Councillor Noreen “You can shove your camera up your arse” WILSON – whose forthcoming bid for election to Scarborough Borough Council (SBC) will reputedly not take place with the benefit of a Labour Party official Nomination (have they finally spotted a liability?) – in respect of my efforts to point out that, due to the apparent incompetence of one or other of the Council’s paid public servants, the Council stands in flagrant breach of the terms of the Equality Act 2010. 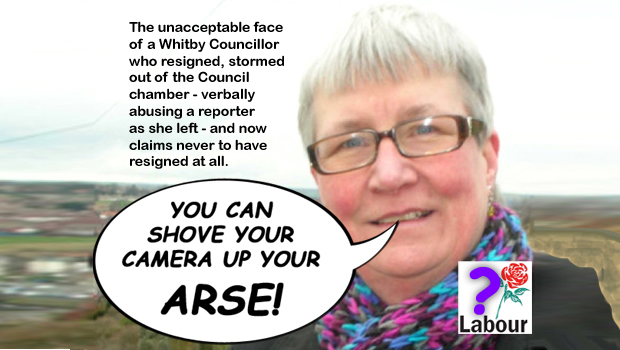 My Formal Complaint (based on irrefutable evidence visible on the WTC web-site) has been denied by Councillor Noreen “You can shove your camera up your arse” WILSON, in disregard of evidence published into the public domain by the Council (!), and has compounded her stupidity by also denying to me my right of Appeal, as set out in Article 7 of the Council’s Complaints Procedure.

I happen to know that Councillor Noreen “You can shove your camera up your arse” WILSON is herself the subject of a Formal Complaint to the Monitoring Officer by one of her fellow Councillors – one of only four elected members who have a genuine electoral mandate to represent the people of Whitby. I wonder if Monitoring Officer Lisa DIXON will manage to process that Formal Complaint – and publish the outcome – in time for the elections?

I also happen to know that a member of the public was refused an answer (by the Mayor, as advised by the Clerk) to a question raised during Public Participation, on the grounds that the answer involved disclosing “confidential information” that could not lawfully be disclosed in the presence of press and public.

Yet later in the meeting, after the member of the public who raised the question had departed, two Councillors volunteered the very same “confidential information” that had been requested, without constraint from the Mayor or the Clerk. Trapped in their own double-standard, and all ‘on tape’.

If the Mayor (and the Clerk) were correct in deeming the information “confidential” (and therefore exempted from disclosure in the presence of press and public), then the two Councillors acted in breach of regulations and in direct defiance of the Mayor’s ruling.

If not – i.e. if the “confidential information” was not confidential at all – then the Mayor wittingly lied to the member of the public, rather than providing an honest and transparent response. What a surprise that would be.

As Councillor Ian HAVELOCK has more than once observed, “This Council has an extraordinary affection for secrecy”. It would perhaps be fairer to say that of only certain Councillors – coincidentally, Councillors without an electoral mandate.

(It is your vote, dear reader. Cast it wisely).

The matter of the Equality Act 2010 is far from trivial because it is so that authorities must consider their duties under human rights legislation as primary, preceding all other considerations.

So I have submitted a Freedom of Information request in an effort to determine whether or not the WTC paid public servants have taken any steps whatsoever to comply with the Equality Act 2010. If they have not, it is proper that they should be broiugh to account.

I need hardly add that I will be astonished if they have – unless they have done so since I raised the issue with all Councillors six weeks ago on 12th February 2015.

My expectation is that the Clerks may have neglected their duties and the Councillors may have failed to hold the Clerks to account. This is local government at its sloppiest.

For completeness and comparison, I reproduce here the WhatDoTheyKnow Freedom of Information request record of Filey Town (Parish) Council:

It is not clear that this compares favourably with WTC.

So I have submitted a Freedom of Information request in an effort to determine whether or not the FTC paid public servants have taken any steps whatsoever to comply with the Equality Act 2010.

One of the wonderful advantages of submitting Freedom of Information requests via WhatDoTheyKnow is that they very helpfully send you a reminder when the statutory 20-working-day period of grace has elapsed – in this case, just in time for the elections.

I can most enthusiastically recommend WhatDoTheyKnow – it is free, it is transparent and it is a great source of information. Feel free to give it a test run – you may even discover something important. Like County Councillor Carl LES’s Mileage Expenses record.