Having watched the East Riding of Yorkshire Council meeting of Full Council held on Wednesday 22nd June 2022 (to witness the unanimous vote in favour of the anti-BID motion Proposed by Councillor David NOLAN [Lib.Dem.]) and Seconded by Councillor Andy WALKER [Y.P.], I was unsurprised to receive emails from (and hear from, over the phone and in person) a number of interested observers who, like me, had been shocked by the form of words deployed by the ERYC member for Cottingham North, County Councillor Geraldine MATHIESON [Ind.].

One resident specifically requested that I should publish his comments, which I do below, having first redacted a single vowel for the protection of any ‘snowflakes’ amongst readers of the North Yorks Enquirer (there cannot be many), so as not to “confuse or frighten them unnecessarily”. Mark those words – they belong in a context:

“She’s a patronising bugg*r with the effrontery to assume keeping the public ignorant of facts is her duty. No place for people like her in any sort of governmental role. Get her out.”

Another was more succinct:

“Who the hell does she think she is?”

What could have prompted these unequivocally damning condemnations?

Readers may judge for themselves, first by watching Councillor MATHIESON in action, and then by contemplating my transcript of her staggeringly condescending remarks.

But first, for those unsure of the meaning of the word “condescending”, I offer the following short-list of synonyms, screenshot from a popular online thesaurus:

And now, ladies and gentlemen, I give you Councillor Geraldine MATHIESON – in her own ‘write’. No impromptu lapse of control, these appalling remarks; they were read out from a prepared “speech”. Thus, they were predeterminedly condescending.

Would readers now agree that Councillor MATHIESON’s remarks were indeed condescending, arrogant, patronizing, snooty, complaisant, disdainful, egotistic, etc? Or are my correspondents and I over-reacting?

To put it another way, would readers agree that Councillor MATHIESON’s remarks were actually (and actively) disrespectful, insolent, impertinent and out of line?

“I see our role as Councillors as being somewhat like being a parent.

And, as a good parent, you don’t – you have to act in the best interests of your children.

It does not always involve asking children what they want – or what they think – at every opportunity.

Sometimes, it actually involves NOT telling them things that might confuse or frighten them unnecessarily.”

Does Councillor MATHIESON really believe in the supremacy of her own worldly wisdom – her moral and intellectual ascendency over her electors (her paymasters) – in such high degree as to reduce the people who have repeatedly elected her to SERVE them as their democratic representative to the level of vulnerable “children”, to be protected, at all costs, from the truth about what their Council is up to?

On the subject of respect, would readers agree that Councillor MATHIESON’s remarks were profoundly disrespectul to the common man – the “little people”, as SBC Leader Councillor Steve SIDDONS [Lab.] likes to characterise us?

I ask, because RESPECT is a legal requirement enshrined in the ERYC Councillors’ Code of Conduct under the terms of the Localism Act 2011:

“In your contact with the public, you should treat them politely and courteously.”

Labelling them too immature and too ignorant to digest Council matters is neither polite nor courteous. It is downright insulting.

I am reminded of the ‘Mission Statement’ on the Mosaic Partnership website (swiftly removed after I highlighted it in an earlier article on the subject of Yorkshire Coast BID Ltd – an open invitation to Councils to milk businesses for as much ‘revenue’ as possible: 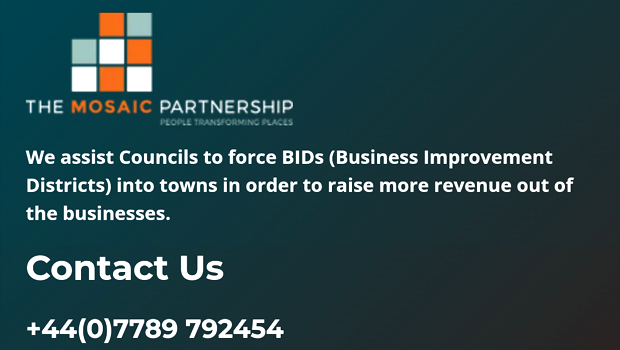 Ironically, some of these “children” have systematically out-foxed Officers of both Councils – and some Councillors, too.

In the public interest, I have lodged a Formal Complaint against Councillor MATHIESON (who can surely not claim to have not been acting in her capacity as a Councillor – the customary ‘get out’ technique). And I have instructed ERYC Monitoring Officer, Mr Mathew BUCKLEY, to communicate to Councillor MATHIESON her opportunity to provide a written apology to the East Riding electorate, for publication here on the Enquirer, or, failing that, to exercise her ‘Right of Reply’ in defence of her remarks.

Astonishingly, Mr BUCKLEY (who is leaving the Council in a few weeks and is therefore even more ‘untouchable’ than hitherto) has announced that he will not communicate these opportunities to Councillor MATHIESON, thereby depriving her of a voice in the matter.

My expectation was that Councillor MATHIESON would go to ground, relying on the ‘plausible deniability’ option of claiming that she knew nothing of my Formal Complaint.

However, I now learn that there seems to have been a ‘leak’. Why else, at this particular juncture, would Councillors be telling me that it is a common occurrence for Mathew BUCKLEY to withhold information from members? Be that as it may, I would expect Councillor MATHIESON to be asking the Monitoring Officer what is going on . . . if she dares. She would be a fool not to . . . but anything is possible.

Finally, I have reserved my position regarding the secondary consideration of Councillor MATHIESON having potentially brought the authority into disrepute. My next action will be contingent upon hers.