Regular readers will be aware that one of the rare tools provided for the benefit of those who wish to scrutinise public bodies and defend democracy is the Freedom of Information Act 2000 (hereafter, ‘the Act’).

For readers unfamiliar with the general principles of the Act, the following information from the website of the Information Commissioner’s Office (ICO) provides a general overview: 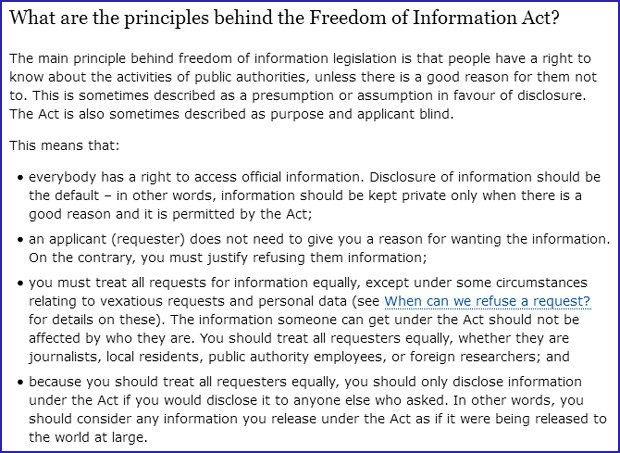 Of particular interest, for the purposes of this brief article, is the very last line:

This principle is also embodied in the commonly-used phrase “disclosed into the public domain”. It applies, without exception, to EVERY Response to a Freedom of Information Request.

Having invested almost 12 years into scrutinising public bodies, I have some experience of  Scarborough Borough Council’s attitude to what the ICO describes as the “presumption or assumption in favour of disclosure”.

That attitude could be fairly characterised thus:

“We will go to extraordinary lengths to interpret the requirements of the Act in such a perverse way as to disclose the barest minimum of information, since we fear that “open and transparent” disclosure may present critics with an opportunity to demonstrate our incompetence and/or dishonesty.”

Readers will now be swift to discern the irony in the following Disclaimer which Scarborough Borough Council appends to ALL of its Acknowledgements and Responses to Freedom of Information Requests:

This is clearly an attempt to intimidate the Applicant/Requestor into NOT sharing the information disclosed in the Response with any other party, because doing so “may be unlawful”. It is not. Far from it.

All three are bare-faced misrepresentations of the same sort as those which we have already disclosed concerning the activities of the Director of Legal & Democratic Services Mrs Lisa DIXON, under whose aegis Freedom of Information Requests are processed.

So there are at least three distinct and noteworthy possibilities surrounding this SBC FOIA Response Disclaimer:

2) SBC is attempting to intimidate or bully Applicants/Requestors into silence regarding such disclosures as have been extracted;

3) Mrs DIXON and her crew are unable to grasp the first principles (as set out in the ICO description, above) of the Freedom of Information Act, thus demonstrating that they are NOT FIT FOR PURPOSE.

In my view, all three elements obtain.

The SBC attitude to FOIA Requests is apparently:

1) SECRETIVE – setting a non-existent obstacle in the path of anyone who hopes to inform the public and assist the Council in its commitment to “openness and transparency”;

2) INTIMIDATORY – attempting to exert a power over Applicants/Requestors which the Council does not possess – the power of censorship.

3) INCOMPETENT – the inability to read and comprehend the requirements of the Act and to accurately express those requirements in the Council’s FOIA Response Disclaimer.

This work is becoming tedious. It is like shooting large fish in a very small barrel.

It is sad to note that, with one possible exception, no current Scarborough Borough Councillor has taken any steps to instruct the Director of Legal & Governance Services to eradicate this ultra vires statement.

(And all of you SBC Councillors who also sit on Parish/Town Councils should instruct your Clerks to ensure that their Disclaimers are corrected, as necessary).

Councillor Tony RANDERSON [Lab.], Portfolio Holder for Neighbourhoods, told Councillors and members of the public (during the Zoom meeting of Full Council on Thursday 28th 2021), that there is an “unwritten law” that prohibits criticism of Officers.

One could argue very persuasively – as I believe I do – that the prime function of a body of elected representatives is to instruct, monitor and, where necessary, censure Officers of Paid Service when their performance falls below the standard that the electorate – the rate-paying public – has a right to expect. This article exposes a case in point.

What Councillor RANDERSON has failed to grasp – despite his oft-referenced twenty-odd years (on and off) on the Council – is that the Officers of Paid Service are in the employ of the elected Councillors who appoint them. They are the ‘help’ – and, as we have seen, good ‘help’ is hard to find these days. The Councillors are the ‘masters’ and the Officers are the ‘servants’.

Councillor RANDERSON’s clueless belief in his “unwritten law” (disallowing criticism of Officers) effectively gives the Tail the liberty to wag the Dog with total impunity. By rights, he should be instructing CEO Mike GREENE to instruct his Director of Legal & Governance Serices to expunge that ultra vires assertion from the Council’s FOIA Response Disclaimer immediately.

If the new ’empowered’ RANDO gave a flying flock about democracy, he would do so.

There was a time, before attaining Cabinet-status, when Councillor RANDERSON used the pages of the North Yorks Enquirer (a link very much worth the following!) to bemoan then then-Mayor Councillor Joe PLANT [Con.] and his Officer-supported departure from Constitutional requirements, as set out in statute.

“The Tail is very clearly wagging the Dog here, yet again, and you are clearly comfortable in allowing this to occur.”

Alas, the Dog has lost his bark!

Now step up to the front of the class, Councillor RANDERSON. Dock the Tail. And, for starters, get this unlawful Disclaimer sorted! Take a leaf out of Councillor Brian TOLVER’s book: