SBC versus ‘Elizabeth’ the Steam Bus: A Lot Of Hot Air

In recent years, the inevitable annual dispute between Vern and Viv SMITH, operators of one of Whitby’s most popular attractions – Elizabeth the Steam Bus – and Scarborough Borough Council has been edging towards a catastrophic climax.

The latest round took shape in the public eye when the Whitby Gazette published an article entitled “Steam bus to leave Whitby after latest dispute” .

The gist of the matter is that Vern SMITH has accused the Council of the heinous crime of insisting that the 11-tonne Elizabeth is parked in a designated parking bay, with a valid parking ticket, during the twice-daily five minute period in which she takes on water. Tyranny most foul.

Make no mistake, this is an accusation of wrong-doing of the highest conceivable order.

Naturally, Scarborough Borough Council could not allow such a defamatory slur on its impeccable public reputation to stand. 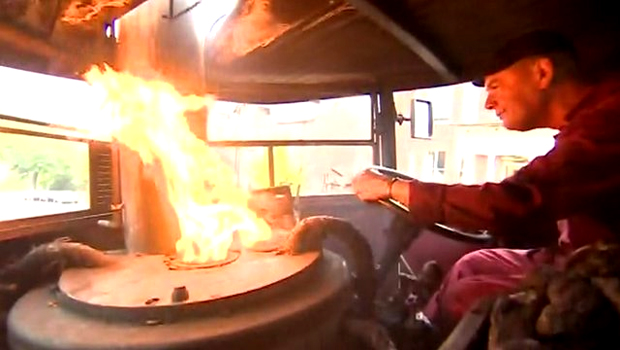 So it came as no surprise when a public announcement appeared on the Council web-site:

The statement sets out to “strongly refute” every element – and more – ofthe deeply damning allegations popularised by the Whitby Gazette. It does so by means of a detailed rebuttal, citing an evidential thread of correspondence supposedly demonstrating the Council’s innocence. The Council is insistent that its actions have been proper and benign in every way.

This puzzles me – as it puzzles many a commentator.

As one Councillor put it:

“Why has the Council never ‘strongly refuted’ the allegations made by former Councillor Geoff EVANS – that the Council covered up the crimes of predatory paedophile Peter JACONELLI?“.

And a television journalist rang to ask me:

“Where will I find the announcement on the SBC web-site that ‘strongly refuted’ the oft-repeated and fully-documented allegations against the Portfolio Holder for Finance, Procurement & Legal Councillor Jane KENYON-MILLER, regarding her undeclared Disclosable Pecuniary Interest in the bankrupt US company Belvedere Computers Inc.?”.

“I don’t remember reading that SBC ‘strongly refuted’ the BBC Inside Out demonstration that the Council lied when it claimed never have attempted to have Real Whitby ‘terminated’!”.

I put these questions to a retired solicitor friend of mine. He told me that it was unthinkable for any public body or public figure to allow such devestating allegations to go unrefuted in the face of relentless repetition in the public domain where, by now, hundreds of thousands have people witnessed them.

He could imagine only one circumstance in which the Council might be moved to publish such a strenuous denial of such relatively trivial allegations as appeared in the Gazette’s coverage of the Elizabeth saga, yet remain silent in the face of the sustained barrage of meticulously detailed allegations published on Real Whitby and the North Yorks Enquirer.

And what is that  particular circumstance, I asked. His response?

“NY Enquirer  allegations must be true – all of them.”

Indeed, they are. And the Council cannot deny them. All the Council can do is to ignore these allegations, and hope that the public – the electorate – will eventually forget about them.

The front page of the Whitby Gazette today (Friday 1st August 2014) announces that Elizabeth has rolled over in the face of Scarborough Borough Council’s “obstructive” behaviour. Vern and Viv SMITH have thrown in the towel.

If the dreamers at St Nicholas Straße imagine that the NY Enquirer will do the same, well . . . let them dream on.