The Enquirer belatedly learns, from a close colleague, that Scarborough Borough Council has also responded to an FOIA request (though not to the Enquirer) with the information that three Reminders were issued in respect of Council Tax arrears in the relevant time period (2011/12, 2012/13, 2013/14, 2014/15 and 2015/16), and one serving Councillor – Councillor Sam CROSS [Ukip] – was served a summons relating to Council Tax arrears in the sum of £1,089.46.

CROSS, UKIP’s current Group Leader on Scarborough Borough Council, was sent the summons for a property that was not his home and where tenants had run-up arrears without informing him. The bill has been paid off in full. 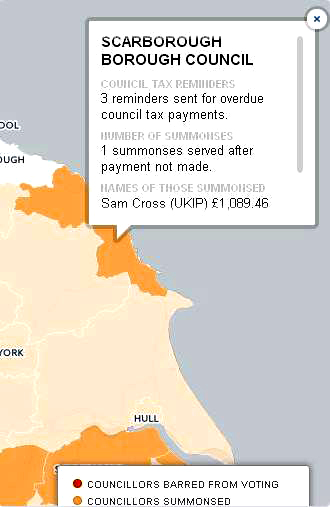