I trust you are well.

When I wrote to you on 16th September 2019, to welcome you to the Borough, I referred you to the following link, drawing your attention to your Council’s breach of legislation regarding its unlawful interception of emails:

It is a matter of regret that I continue to have no option but to address you here in the public domain – it precludes discretion – but that is a consequence of the Senior Management Team’s ineptitude, as manifested in its decision to ‘deem’ me “vexatious”. (By the way, my review is due on 17th July 2021).

Nevertheless, the Council’s predicament is now so dire that I feel duty-bound to apprise you of information that has come into my hands before it passes into others.

By way of preamble, I draw your attention to an article of mine published on the North Yorks Enquirer:

In that article, I sought to express my conclusion, as a layman, that the Council has been failing to comply with legislation in respect of the way in which revenues which should have been ring-fenced to the sole advantage of the ‘Whitby Harbour Undertaking’ have, for a number of years, been included in the General Fund.

You will have discerned, from the title of this publication, that I have been examining the possibility that other revenues that should have been ring-fenced to the sole advantage of Scarborough Harbour have been misdirected in a similar way.

I hope to now set out, for your consideration, certain material that gives grounds to conclude that such has been the case.

I begin with an email ‘thread’ commencing in July 2012:

As you know there is some confusion with regard to how the harbour is funded and how some of the funding is supposedly siphoned off into the SBC central fund.

However, since there is a growing ambition within both the leisure and commercial users circles to create a harbour that fulfils the needs of all users there is of course the question of how we fund this.

Therefore perhaps you could answer some important questions that have remained unanswered for some time, thereby resulting in lots of speculation and confusion amongst stakeholders and also possibly SBC officers and councillors. 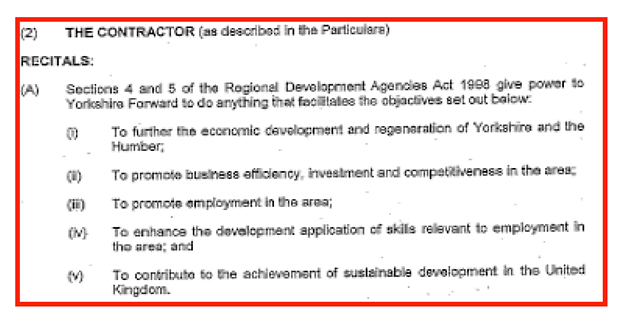 The contractor as described in the extract above is Scarborough Council, the key word from my perspective within that extract is the word “area”. My perspective on word “area” that would mean the harbour and Sandside.

For some time now stakeholders from all the relevant interests around the harbour have been requesting more detailed accounts on just how and where harbour revenues are derived and spent. Certainly in my recollection there has never ever been any mention of any ring fenced revenue with regard to the pontoon development and as specified in the contract as agreed to between SBC (contractor) and Yorkshire Forward.

This has been the case since the pontoons where installed in 2006/2007.

My question therefore is ;

Can you therefore advise if this pontoon revenue, which is not an insignificant sum,  will now be ring–fenced in accordance with the law and within the spirit of the contract, its motives and its intent?

Then, on the same day, the then Harbours Portfolio Holder responded, as follows:

(Brian BENNETT was the then Head of Tourism – a post which, at that time, subsumed responsibility for Harbours).

Have SBC progressed any further with my question as of 14th July below please?

And there the trail went dead.

Except, that is, for a number of fascinating entries in the Council’s own records, which I will exhibit here for your consideration.

Beginning on 8th September 2008, these excerpts bespeak a marked absence of “Openness and Transparency” in response to a request for information regarding Harbour revenues. Councillor JEFFERSON, the present Portfolio Holder with responsibility for Harbours, was present.

On 17th April 2012, there was a further request for sight of the Harbour accounts. Mr BENNETT agreed to progress the matter. Again, Councillor JEFFERSON was present:

On 18th July 2012, a further request was made for sight of the Harbour accounts. Councillor JEFFERSON was present asking why the West Pier car park revenue was not subject to the ring-fence requirement. The same question was raised in regard to pontoon revenue:

By now, Mike, we are four years into the pursuit of the Scarborough Harbour accounts. You will discern the picture that is emerging. The agreement to which Councillor JEFFERSON referred (to her credit) was the 10th May 2006 agreement between Yorkshire Forward (YF) and your Council in respect of YF’s provision of funds for the pontoons. Mr BENNETT’s response clearly indicated that no ring-fencing was in place. The YF/SBC contract may be viewed here.

The clause (and cause) of concern is the following excerpt, found on page 27:

It would be tempting to rest my case here but I do feel readers will appreciate a greater depth of insight.

The Extraordinary Meeting on 20th September 2012 (regarding the West Pier upgrade) was subsequently abandoned, but not before the following remarks were minuted:

As you see, the Finance Director Mr EDWARDS (who holds responsibility for the Harbour accounts) here conceded that pontoon revenues had been diverted to supplement demolition costs elsewhere – i.e. outside of the ring-fence. This causes me some concern. Mr EDWARDS is the s.151 Officer and is thus responsible for the Council’s accounts. In consequence of the Formal Objection lodged by the Whitby group, the External Auditor has found itself unable to sign off the Council’s accounts since 2015/16. Given the contention over the ring-fencing of revenues in respect of both Harbours, and setting a distinction between those revenues and the revenues accountable in the Council’s General Fund, is it appropriate that the accounting of both revenue streams should be undertaken by one and the same man – Mr EDWARDS – who straddles that ‘fence’? That seems to me to fall perilously close to a conflict of interests.

On 19th October 2012, we find yet another request regarding the ‘ring-fenced’ revenue. There would appear to be no minutes to support the response provided by Mr EDWARDS to the effect that West Pier car park and the pontoons revenue had ever been ‘clarified’. Again, Councillor JEFFERSON was present at the meeting.

On 21st December 2012, we encounter another discussion regarding pontoon revenues. Embarrassingly, the response is weak and does not tally with the conditions on the YF/SBC agreement, as cited above: 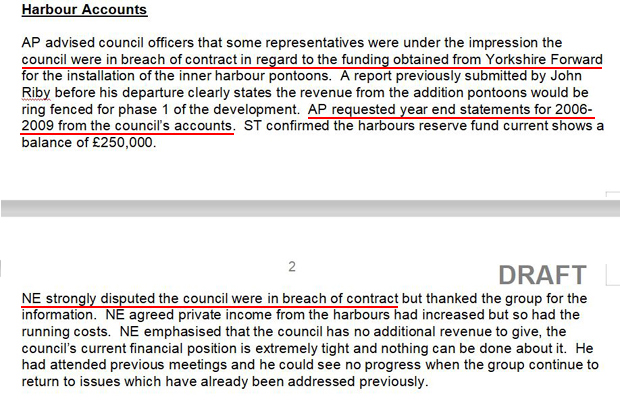 I have identified absolutely no evidence of the existence of any Report being filed by Mr EDWARDS or any other SBC Officer at any previous meetings, nor does the form of words set out in the YF/SBC agreement (page 27) provide that the income from the pontoons must be ring-fenced for only a limited duration, or a limited sector the Harbour area.

Without labouring the point further, I believe readers (yourself included) must by now be in no doubt that, far from “openness and transparency”, these Council documents reveal that the Council did indeed breach the terms of the YF/SBC agreement and, further, that a succession of public servants has prevaricated and dissembled on this subject as a matter of practice and policy for many years.

In close parallel to events at Whitby Harbour, revenues from Scarborough Harbour have apparently been significantly misaccounted (some would say ‘pilfered’) in order to balance successive budgets which otherwise would have necessitated a dramatic increase in Council Tax and/or reduction in services and/or liquidation of public assets.

Granted that the roots of the present calamity took hold during the tenure of your predecessor, the fact remains that you are stand accused of have having chosen to believe the glib explanations of rogue Officers, against whom you were forewarned.

Returning briefly to my opening remarks concerning the Council’s propensity for ‘deeming’ inquisitive residents “vexatious”, it is noteworthy that only this week (following the publication of my “Rape of Whitby Harbour” article, another Whitby resident who has queried and challenged the Council’s conduct in relation to Whitby Harbour has now been placed on ‘the naughty table’.

It shocks me to read in the Yorkshire Post that your Council intends to spend £6.5 million (33%) of the Towns Fund on the ‘regeneration’ of Scarborough Harbour when it is clear to me that the forthcoming so-called ‘regeneration’ may never have been considered necessary had the promised and expected maintenance and development of Scarborough Harbour been covered by the revenues from the YF pontoons – in accordance with the YF/SBC agreement – and the West Pier car park; monies which appear (and do correct me if I am mistaken) to have been used, in more than one financial year, to balance an otherwise unsustainable budget. ‘Value for Money’? 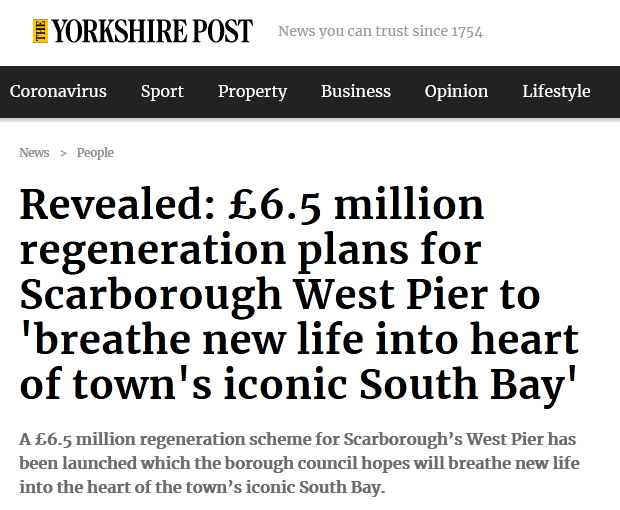 On Monday 19th July 2021, the Monitoring Officer is scheduled to brief elected members, in the Council Chamber, on the dilemma facing them.

Mrs DIXON would do well to take as her text my earlier article “The Rape of Whitby Harbour” as well as the text and excerpts cited in this present Open Letter.

On Friday 23rd July 2021, as I hope you are aware, the Extraordinary Meeting MUST convene in the Council Chamber (NOT on Zoom) to seek a resolution of only the Whitby part of the looming ‘bankruptcy’ of the Council, in accordance with the terms of the Local Audit & Accountability Act 2014, Schedule 7: 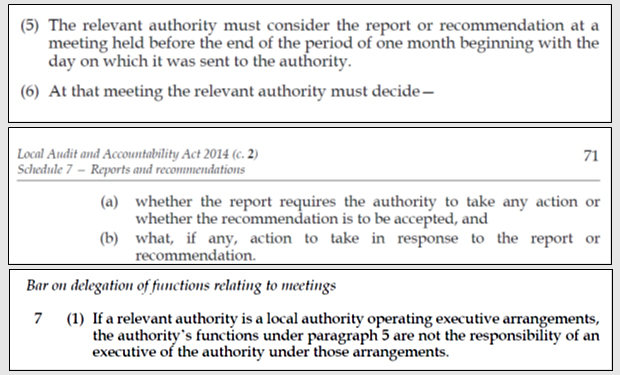 Thus, the Council will NOT be “operating executive arrangements”. This is not within your gift – notwithstanding the Leader’s contention that, in reference to Zoom meetings:

I believe the ratepayers are entitled to know whether or not you retain complete confidence in your Director of Finance.

I believe it is now time for you to engage with me, in your capacity as a public servant, and provide an exhaustive explanation for the apparent misaccounting of the Whitby and Scarborough Harbours revenues – or instruct your Director of Finance to do so.

And finally, could I ask you, please, to forward the following links to Mr Mark KIRKHAM of MAZARS?