I write with a view to obtaining clarification regarding the recent contradictory information concerning the alleged presence of asbestos in The Futurist Theatre.

I refer you to my articles:

I am now attempting to get down to the truth of the matter.

In an email to all Councillors (not, at the time, shared with the wider public) you have provided certain information which, for clarity, I have highlighted in bold red type: 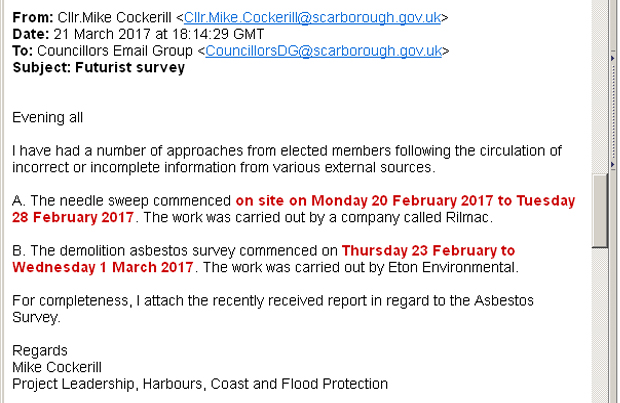 The significance of this information is that, according to your email, RILMAC operatives were on site performing the ‘needle-sweep’ during the period 23rd February 2017 to 28th February 2017, inclusive, and that Eton Environmental operatives were also on site conducting their work – work which you have described thus:

This begs the question as to why RILMAC was not informed that a “fully intrusive and destructive inspection” was taking place during the period in which RILMAC operatives were present on site conducting their ‘needle sweep’, the point of which was “to make it safe for other parties”.

Clearly, this “fully intrusive and destructive inspection” would have risked placing RILMAC operatives in considerable danger – if it really did take place during the dates you have provided, which I have reason to doubt.

Equally clearly, this would represent a reckless abandonment of the Council’s Duty of Care to RILMAC‘s operatives and, very probably, a severe breach of Health & Safety regulations – again, if it the Eton Environmental “fully intrusive and destructive inspection” really did take place during the dates you have provided.

According to direct correspondence with RILMAC, their operatives were indeed on site during the specified overlapping period.

Moreover, RILMAC have confirmed that:

That first bullet-point signifies that there was no overlap, so (thankfully) we have some assurance that RILMAC personnel were not subjected to an extreme Health & Safety hazard – as your own dates assert. The second confirms that the purpose of the ‘needle sweep’ was to render the building safe for other contractors, who would follow RILMAC into the building. The third confirms that no intrusive or destructive activities took place. The fourth is self-explanatory – i.e. the “next contractors” had yet to arrive.

So the situation may be summarised as follows:

1) You. Mike, maintain that the RILMAC ‘needle sweep’ overlapped with the Refurbishment/Demolition and Asbestos Survey conducted by Eton   Environmental (Version 1 signed and dated Monday 13th March 2017!) – that “fully intrusive and destructive inspection” – during the six-day period 23rd February 2017 to 28th February 2017, inclusive;

2) RILMAC asserts that, for the whole of the duration of their ‘needle sweep’, “There was no one else working on site…”.

It does not require the astronomical IQ of a Portfolio Holder to discern that these two positions are mutually contradictory.

Clearly, somebody (and most probably somebody with an agenda) has been lying.

My question is this, Mike COCKERILL:

Because, if so, the people of the Borough of Scarborough will expect your apology and resignation. It is entirely unacceptable for any public servant, paid or elected (or both), to deliberately mislead the press, public and other Councillors.

You may help you to know that I hold the written statement (with permission to publish) of a former SBC Officer who has been able to confirm that, following an asbestos survey conducted many years ago (I leave it to you to confirm the date), only a tiny amount of asbestos was located in The Futurist Theatre, and that this was safely removed and disposed of in the correct manner, at the Dean Road Depot.

Clearly, that asbestos survey gave rise to a confirmatory Report – a ‘clean bill of health’ for The Futurist Theatre. (I leave it to you to publish that Report).

gives the impression that it was Eton Environmental’s remit to find asbestos if they had to rip the place apart to do so, even though sealed asbestos would have presented little or no danger.

This suggests that your remarks on Yorkshire Coast Radio (published on Friday 3rd March 2017, in an article entitled “Asbestos Found in Scarborough’s Futurist Theatre”, were spurious and little more than cheap scare-mongering, seemingly for the purpose of propagating the unfounded notion that the re-opening of the theatre, whether under the auspices of the Save The Futurist group or any other party, was no longer worthy of serious consideration: 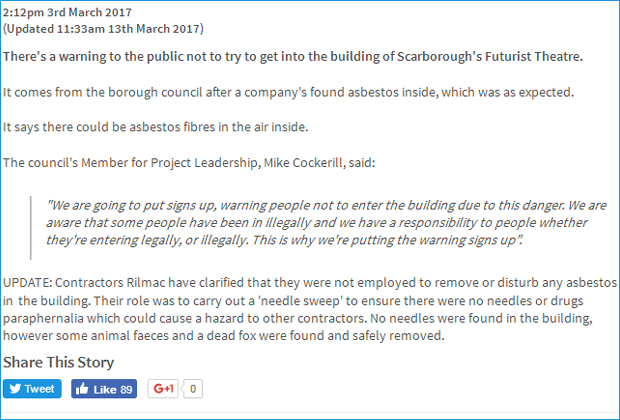 Would that be the same danger to which RILMAC personnel, according to your own time-frame, were allegedly knowingly exposed?

It now appears that the “fully intrusive and destructive inspection” by Eton Environmental was unnecessary (given the earlier ‘clean bill of health’ Report) – if, indeed, it ever took place at all.