Lord Janner, Another Establishment Paedophile Protected By The Police:  An Up-Date

Following on from my last article “Lord Janner, another establishment rapist protected by the police”, I am now running a short up-date.

The above stated that Chief Constable Creedon of Derbyshire revealed that as a Detective Sergeant in Leicestershire Police, he was ordered to abandon an investigation into Lord Jenner by senior police officers.

It also revealed that instead of referring the case to Headquarters in London in 1999, as it was supposed to, The Crown Prosecution Service in Leicestershire held it as a local investigation and did nothing, thereby protecting Lord Janner and ensuring that no action was taken against him. Had the file been sent to London, Janner would have been prosecuted.

The CPS admitted that Lord Janner should have been prosecuted, because the “evidential test was passed”. In other words, there was a realistic prospect of a conviction. Lord Janner would have been charged with 22 sex offences involving nine children and young adults dating from 1969 to about 1988, consisting of 14 indecent assaults on a male under 16 between 1969 and 1988; two indecent assaults between 1984 and 1988; four counts of buggery of a male under 16 between 1972 and 1987; and two counts of buggery between 1977 and 1988.

Speaking to the Daily Mail, Mr Laugharne confirmed that Assistant Chief Constable Joe Mounsey had approached him. Mr Mounsey was the Head of Lancashire Police CID and arguably one of the top detectives in the British Police Service at the time. He was widely admired for his determined investigation ofthe Moors Murders, which resulted in the conviction of Ian Brady and Myra Hindley. ACC Mounsey raised concerns that a very senior figure in the office of the Director of Public Prosecutions in London had asked him to lie about past investigations into Cyril Smith.

For some time, the North Yorks Enquirer has been pursuing an even older and more serious alleged establishment cover up, that of Jeremy Thorpe, who was acquitted of conspiracy to murder, in the 1970’s. It has been alleged that he may have had one of his lovers murdered.  It has also been alleged that the police suppressed evidence to protect Thorpe

Director of Public Prosecutions Alison Saunders is refusing to respond to correspondence on this.

It is alleged that Lord Robert Boothby and Tom Driberg MP used rent boys provided by the Kray twins and this was covered up by the Metropolitan Police.

Given all of the evidence, it is difficult not to believe that there was until very recently a policy of protecting high level paedophiles, no matter what sexual offences they had committed, as commented on by the eminent journalist Stephen Glover: 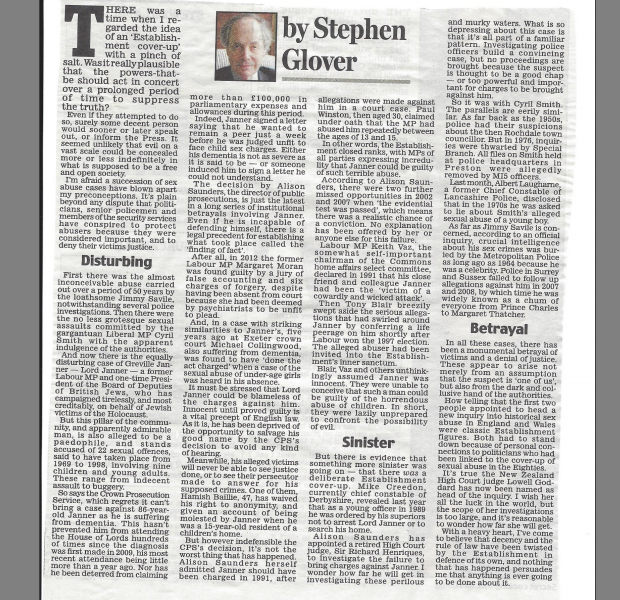 The Director of Public prosecutions now faces calls for her resignation over Jenner and Operation Elveden.  She certainly has a lot of questions to answer, along with a lot of CP lawyers and senior police officers.