Regular readers of the NYE will know that we have covered the Peter Jaconelli and Jimmy Savile paedophile-ring in great detail, on the basis that it is a local story which has achieved national prominence.

Our investigation has been harrowing but nevertheless conducted without fear or favour, despite denials and intimidation from North Yorkshire Police. It has been undertaken relentlessly in the public interest, but we hope, with tact and compassion for the victims.

As a result, many victims of the despicable crimes perpetrated by Savile and Jaconelli have behaved with great courage and dignity by coming forward. We hope that they feel better for giving their evidence and will receive help to come to terms with their experiences.

The Scarborough based charity HOPE (Healing Our Past Experiences) has been prominent in supporting victims.

Our investigation has also revealed multiple and credible witnesses, openly alleging corruption in North Yorkshire Police, specifically that the Police in Scarborough and Whitby were explicitly aware of Savile and Jaconelli’s offending and protected them. As a result, a serving Detective Sergeant from North Yorkshire Police has had misconduct papers served on him in connection with the Savile/Jaconelli investigation.

This is well known and has been covered in the local press.

However, it is not generally known that we have also covered the Cyril Smith and Jeremy Thorpe cases in detail.  It is the latter that concerns this article. 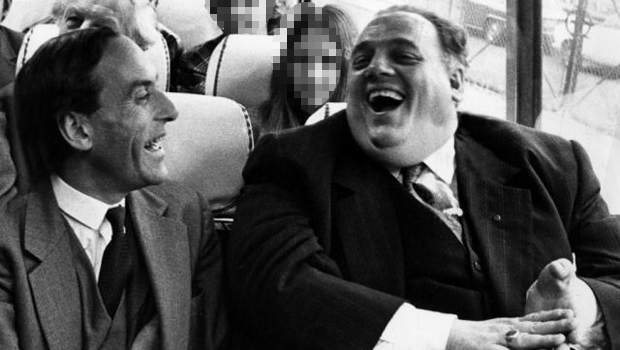 Smith was a friend of Jimmy Savile.  Like Savile and Jaconelli, and the others in the Scarborough ring, it has also been revealed that he was protected by the Police. Smith was also protected by MI5

Smith was also a close associate of Jeremy Thorpe and both men visited Scarborough, (we have brought this connection to the attention of Greater Manchester Police and the North Yorkshire Police).

However, accustomed as we are to operating in the beautiful County of North Yorkshire, where we enjoy the close attention of North Yorkshire Police, this article will concentrate on Jeremy Thorpe and his alleged offending in Devon, London and Sussex. 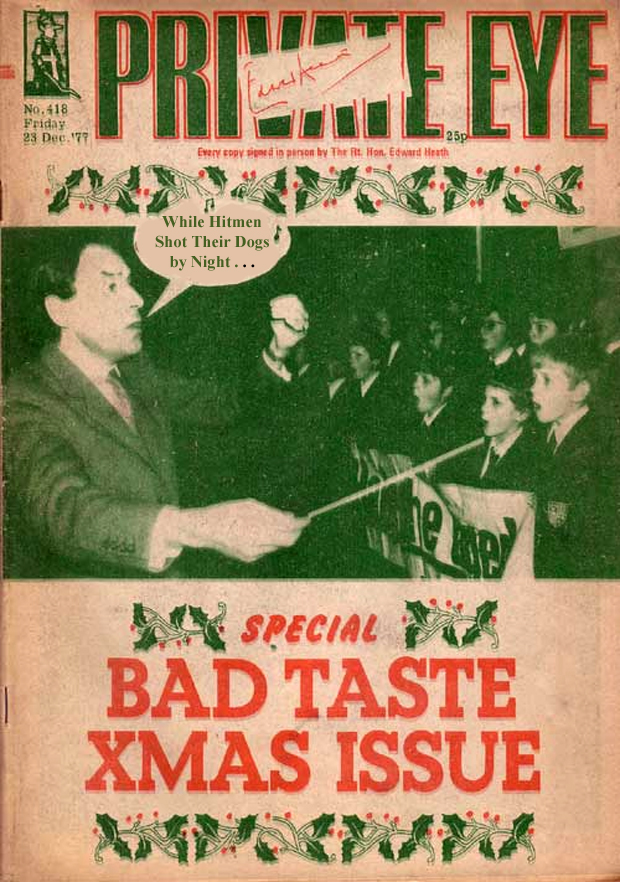 Briefly, Jeremy Thorpe was a man of great ability who revitalised the Liberal Party. He was also bi-sexual, ruthless, a fraudster and a paedophile. He used rent boys and was protected by the Police because he was an Old Etonian, a barrister, an MP and leader of the Liberal Party, at a time when the Liberal Party was a major party commanding 30% of the vote and was widely expected to enter into a coalition government at the next election.

Thorpe had a homosexual relationship with male model Norman Scott, who became an embarrassment and a threat to Thorpe when he threatened to expose him as a homosexual. A revelation that would have destroyed his political career, given the social attitudes of the time.

So Thorpe arranged for Scott to be murdered. A contract killer Gino Newton was recruited to murder Scott on an isolated country road in the Devon moorland, probably paid for with funds embezzled from the Liberal Party. Newton botched the job, shot Scott’s dog and then his gun jammed and he fled. He was later convicted and sent to jail. Thorpe and two other men were acquitted of conspiring to murder Mr Norman Scott at the Old Bailey. Private Eye ran this cover to mark his acquittal: 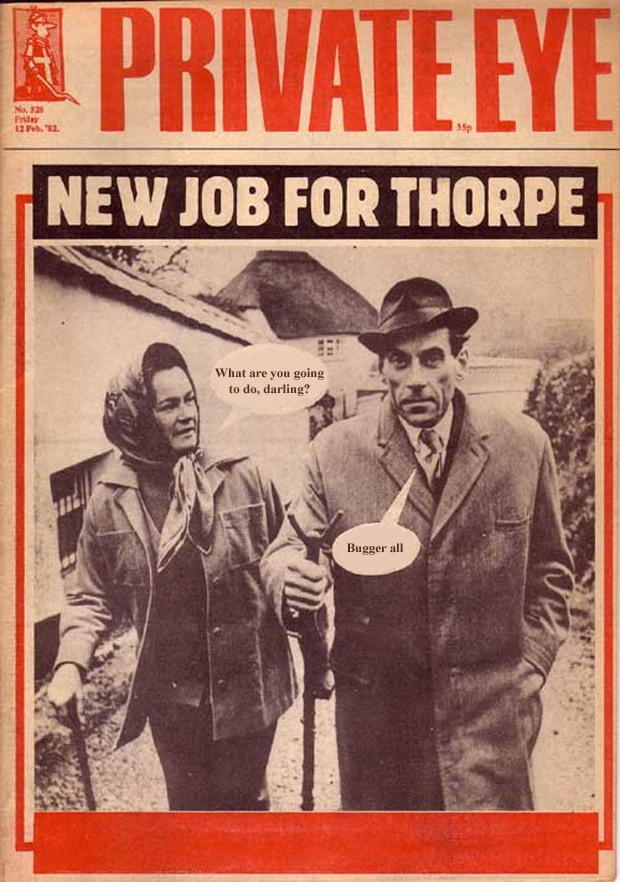 This is all well known.

The relationship between Thorpe, Special Branch and MI5, and the first attempt to murder Norman Scott

However, it is not generally known that there was a previous attempt to murder Scott. According to London criminal Mr Dennis Meighan, he was approached to kill Mr Scott in return for £13,500 – a huge sum in those days. He and another man (with a gun) drove from London to the pub in North Devon where Mr Scott lived. However, his London accent caused attention in the pub. Realising that they stood out, they abandoned the mission and returned to London.

Incredibly, according to Mr Meighan, he confessed to the Police that he had been hired to kill Scott on behalf of a senior figure in the Liberal Party and that subsequently he provided the gun to Newton that was used to shoot Scott´s dog in the second abortive assassination attempt. He also gave a written statement to this effect to Scotland Yard detectives.

He was subsequently telephoned by a Policeman and told to go to Brentwood Police Station in Essex. When he arrived, he was shown a statement about half the size of the one he had earlier given to the Police, with all the evidence incriminating Thorpe removed. He was assured that if he signed it, he would be free to go and that would be the end of the matter.

Neither of the contract killers were arrested, although they were known to the Police. Neither was Thorpe, or the Police Officers who perverted the course of an investigation into a serious crime.

So why were Essex Police involved in perverting the course of a Devon and Cornwall investigation into a serious crime, which had no relevance to its jurisdiction in London?

Following the 1974 General Election, which produced a hung Parliament, Thorpe was offered the opportunity of a Cabinet Post in a Conservative/Liberal Coalition Government (probably Home Secretary) by Prime Minister Edward Heath. That is how powerful and influential Thorpe was. In the event, he was forced to decline the offer, because the Liberal Party could not reconcile itself to an alliance with the Conservatives.

As an MP, Leader of the Liberal Party at a time when it was a major party and could hold the balance of power at the next election by deciding if Labour or the Conservatives formed the next government in coalition with the Liberals, future Home Secretary and close confidante of a member of the Royal Family.

MI5 would have had a close interest in Thorpe. Certainly, no Detective from Essex CID in a local station would have interviewed and taken a statement from a suspect in a serious crime being investigated by Devon & Cornwall Police, that involved a prominent MP. This would certainly have been within the remit of Special Branch only.

In turn the Branch would not have got involved without the express consent of MI5. The conclusion is inescapable that the detectives that interviewed Mr Meighan in Brentwood Police Station were from the Metropolitan Police Special Branch, operating on the orders of MI5. 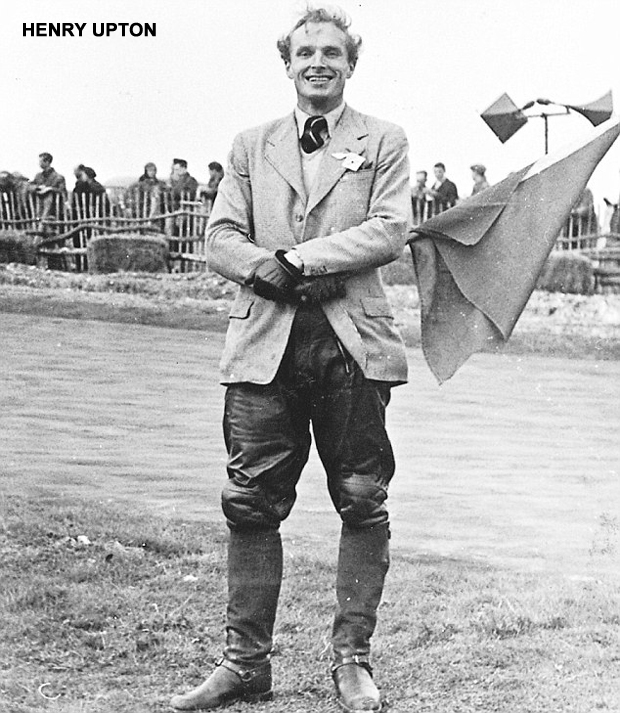 Henry Upton was a paedophile and also Thorpe’s lover. He had convictions for indecency with boys and was jailed in Australia. It has been alleged that Upton was blackmailing Thorpe and that Thorpe arranged for him to be killed. He disappeared mysteriously from a boat off the Sussex Coast in 1957. Full story from Daily Mail here.

The account seems to me to be credible, particularly because Thorpe is known to have acted ruthlessly when his reputation was at stake, and Thorpe had a motive to have Upton killed. His work as a barrister in Devon would have brought him into contact with criminals, possibly involved in the Devon fishing industry, who would know how to handle a boat. Certainly, if the existence of a motive had been known at the time, Thorpe would have been a person of interest to the investigation.

North Yorks Enquirer asks the DPP to re-open the investigations into the Norman Scott attempted murder and the disappearance of Henry Upton.

Obviously it is completely unacceptable for a criminal to openly boast that he escaped justice because of the actions of corrupt Police Officers and the status of a leading politician. Following correspondence with Devon and Cornwall Police, the North Yorks Enquirer has written to the Director of Public Prosecutions Mrs Alison Saunders requesting that she:

North Yorks Enquirer requests that the allegations that Jeremy Thorpe was a paedophile and protected by the Metropolitan Police and MI5 are considered by the Home Office Child Sexual Abuse Enquiry.

We have also separately written to her Honour Justice Goddard, requesting that the Home Office Child Sexual Abuse Enquiry investigates the allegations that Jeremy Thorpe was a paedophile and was protected by the Metropolitan Police and MI5, as was Cyril Smith.

We will of course update you on developments on this, the latest major national story being pursued by the North Yorkshire Enquirer.