Recently, the case of DAC Maxine De Brunner of the Metropolitan Police has hit the press.  DAC De Brunner is alleged to have benefitted personally from misuse of police resources valued at £10,000 for personal purposes in 2014 and tried to do so again in 2015 by diverting specialist Police Officers and vehicles from operational duties, to support her private hobby/interest – membership of the Board of a private school.

Given that the police are being forced to make cuts and are under enormous operational pressure from the increased threat of terrorism, if true, this appears to me to be indefensible.  A more detailed Daily Mail article on the DAC de Brunner’s retirement which ensured she did not have to face misconduct charges is here.  DAC De Brunner has previously hit the news for spending £660.00 on a Napoleon style hat (shown in her picture) for ceremonial mounted duties.

No effective action was taken against DAC De Brunner.  She was honourably retired on a full police pension and never had to account to the public for her actions, through appearance at a misconduct hearing.

The case was covered in Private Eye. 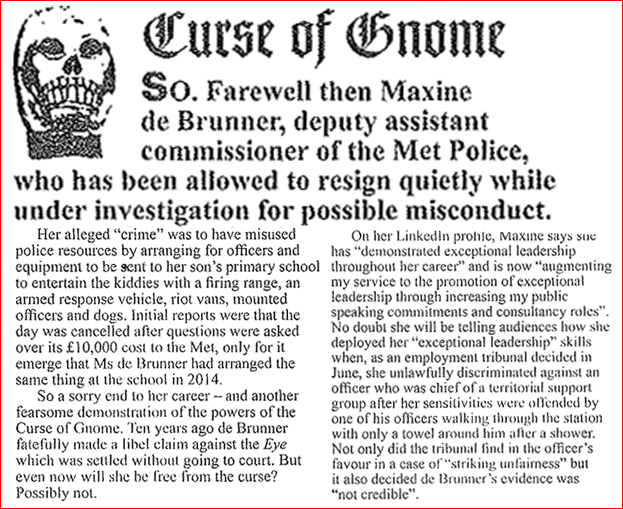 A BBC Article giving greater depth on the sexual discrimination case that was successfully brought against her is here, the Met is appealing the verdict.

Obviously it is a tragedy to see a senior officer destroy her career and personal reputation over misconduct of this nature.  However, I believe firmly in leadership by example and it inevitably follows from this that those in positions of leadership who fail to set the appropriate example must sadly pay an appropriate price for it.   In my view DAC de Brunner should have had to face misconduct proceedings before she was allowed to retire and if the allegations were upheld, been made to pay back the cost of the police resources she misused.  As it is, the poor old taxpayer will have to carry the costs of the tribunal, any compensation to be paid to the harassment victim, the investigation into the alleged misuse of police resources and the £10,000 of police resources that was allegedly misused.

In the period 2003 – 2013 one thousand eight hundred police officers that were suspended were allowed to resign, evade misconduct charges and retire with full pensions.  There are approximately two hundred Chief Officers in the police and no group of public servants has been subjected to so many allegations of misconduct in the last five years.  It is particularly concerning that a candidate for the top job in British policing is alleged to have behaved with such a cavalier disregard for accountability and financial control. The sight of a Chief Police Officer having an allegation of harassment in an employment tribunal being upheld and having her evidence dismissed as lacking in credibility is also worrying. It appears there is a culture of impunity amongst Chief Officers and those that are tasked with their oversight, which exempts them from normal standards of conduct and from any form of censure. 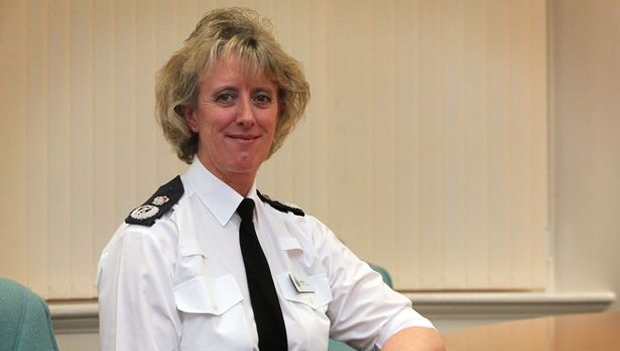 One retired Chief Officer Sue Sim, revealed there was a culture of greed among senior officers who were happy to ‘take whatever public money they could get’, while frontline officers were sacked due to budget cuts.

A Daily Mail investigation accused Police and Crime Commissioners of “staying ‘shamefully silent’ over the flagrant abuses of public money, and being too afraid to stand up to chief officers.”  Sad to relate, this appears to be the case in North Yorkshire Police, which has had more than its fair share of scandals involving Chief Officers and police funds, and could be argued to lead the field in this regard.  Amongst the most famous:

The classic case of misconduct by a Chief Police Officer is that of Chief Constable Stanley Parr of Lancashire Police, who was dismissed from office in 1977 for amongst other things misuse of police vehicles, following an investigation by the Lancashire Post.  Unlike today’s breed of Chief Officer, in Parr’s case, he was held accountable and publicly dismissed the service.  illustrating how standards of integrity and accountability amongst Chief Police Officers have dropped since 1977.

Misconduct by Chief Police Officers and the repeated failure of the civilian bodies tasked with addressing it undermines public confidence in the police.  It also undermines the discipline and morale of the police service amongst rank and file officers.  The phrase “Lions led by Donkeys” came to mind when writing this piece.  In my view there is no place in the police service for officers that abuse their positions and the lax financial controls they operate under, to use police resources for their own benefit.

I feel very sorry for the ordinary Constables, Sergeants, Inspectors, PCSO’s and civilian workers in the police service.  On the one hand they are bearing the brunt of the cuts as well as facing the stress and danger inherent in the police service; whilst reading headlines detailing misuse of police funding, double standards of their Chief Police Officers and the failure of officials to hold them to account on the other.

In the cases of Chief Constable Parr, DCC Briggs and Chief Constable Maxwell, their misconduct was only exposed as a result of investigative journalism by local journalists.  DAC De Brunner’s case was exposed by the Mail on Sunday.  This shows the vital role of a free press in a democratic society in highlighting these abuses, particularly when those bodies that are put over the police hold them to account and enforce service discipline irrespective of rank do not.  I consider it is essential that the media keeps these cases in the public eye, to prevent them from being swept under the carpet and to help deter public servants from abusing their positions in the future.  I think the North Yorks Enquirer has done a very good job in this regard and I hope you will continue to hold public bodies to account.

DAC De Brunner has announced she is to pursue a second career as a leadership consultant.  Very nice too.  Maybe she could start demonstrating leadership and accountability by paying back the money and offering an apology.