Petty – but by no means trivial

The objective of this article is to address the circumstances surrounding allegations of misconduct on the part of County Councillor John BLACKBURN.

Admittedly, the amount of money involved is petty – scarcely worth mentioning in the context of the largest County Council in the country, with a gross annual budget approaching a billion pounds.

But integrity, fairness and justice do not appear within that budget; they are priceless commodities beyond quantification in monetary terms.

So, petty as it is, this sordid tale is very far from trivial.

In November 2012, I published an article here on Real Whitby entitled “Double-dipping double-talk – a Frank & Honest Statement”. In the comments section beneath the article, a member of the public made reference to anecdotal evidence (hearsay), to the effect that County Councillor John BLACKBURN (one of the ‘double-dippers’ who accepted Broadband/IT Allowances from both NYCC and SBC for one and the same internet connection) had gloatingly claimed, at a Conservative Party meeting, that he had habitually ‘hoarded’ postage stamps allocated to him by the County Council strictly for Council correspondence, for personal use, including despatching electioneering material.

I was able to contact the originator of this anecdotal information and verify that the posting on Real Whitby had been accurate. That originator of the story expressed a wish to lodge a Formal Complaint through me, acting as Complaint Friend, so that the Complaint could be processed via NYCC’s Anonymous Complainant Procedure – a procedure similar to the Council’s Whistle-Blower Procedure, specifically designed to protect Complainants from possible reprisals. Hereafter, I shall identify the party for whom I acted as Complaint Friend as ‘the Anonymous Complainant’.

On 16th December 2012, I published an article here on Real Whitby reporting on these circumstances under the title “NYCC: The Stamp(s) of Authority?”.

Following the publication of this latter article, a member of the public (hereafter; ‘MOTP-1’) came forward asserting that he, too, had witnessed County Councillor John BLACKBURN boasting to a group of prospective Conservative election candidates about his ‘stamp-collecting’ activities.

Consequently, I wrote to the NYCC Investigating Officer Catriona GATTRELL, providing a short statement from MOTP-1, along with MOTP-1’s real name and contact details.

Despite the extraordinarily long period during which the Complaints Procedure (comprising, now, two Formal Complaints against County Councillor John BLACKBURN) was in process, no attempt was made, either by Carole DUNN or Catriona GATTRELL, to elicit further testimony from either the Anonymous Complainant (through me) or MOTP-1.

Nevertheless, Catriona GATTELL’s Final Report recommending that the two Formal Complaints be rejected, on the basis that she was according little credence to the two Complainants, giving “greater weight” to County Councillor John BLACKBURN’s assertion that he would not have done such a thing.

Naturally, I wrote to Catriona GATTRELL protesting that her Investigation was deeply flawed. I received no response. I do not know whether my protest (detailing the many shortcomings of the Report) ever reached the Monitoring Officer and/or the Independent Person who, together, act as judge and jury in such cases.

On 17th June 2013, I published an article reporting all this in some detail, under the title “NYCC Standards Report: Blackburn Whitewashed”.

In due course, I received the formal Decision Notice, informing me that, as per the Recommendation in Catriona GATTRELL’s Report, County Councillor John BLACKBURN had been found to have committed no breach of the Councillors’ Code of Conduct. There is no avenue of appeal. Case closed.

I reported on this unsurprising (though actually quite astonishing) and utterly disgraceful outcome on 21st July 2013, under the title “4,000 Holes In Blackburn Cover-Up”. My expectation was that we would hear no more about the matter – just another breach of the Councillors’ Code of Conduct swept slowly but efficiently under the carpet, like so many before it, by a thoroughly biased and superficial Investigation.

The Third (and Fourth) Complainant(s)

In the latter part of that last-mentioned article, I reported on information that came to me that, unbeknownst to me, yet another member of the public – a former Councillor whom I shall call MOTP-2 – had written directly to NYCC Chief Executive Officer Richard FLINTON, back in February and March 2013, stating his wish to add his own name to the Formal Complaints against County Councillor John BLACKBURN (and reporting the availability of a further – a fourth – witness: MOTP-3) who was willing to do the same.

MOTP-2 was very rudely fobbed off by Richard FLINTON, and neither MOTP-2 nor MOTP-3 had their testimony included in Catriona GATTRELL’s absurdly biased Investigation.

I am no longer shocked by the extent to which County or Borough Council Officers are prepared to abuse the Complaints Procedures in order to exonerate errant Councillors of any and every infraction against the Code of Conduct, but my determination to put a stop to this betrayal of the public trust is undiminished. So, on 24th July 2013, I wrote to Richard FLINTON demanding an exhaustive explanation of his own conduct in the matter. How could he have failed to inform Investigating Officer Catriona GATTRELL of the new witnesses? I directed him to the correspondence record between the various parties, which clearly demonstrates that, despite his personal knowledge of the testimony from MOTP-2 (and the availability of corroborative testimony from MOTP-3), Catriona GATTRELL omitted any mention of the interventions of MOTP-2 and MOTP-3 in her Investigation.

The response I received from Richard FLINTON on 25th July 2013 (is it not amazing how fast these paid public servants can react when caught on the hop?), I reproduce here, in its entirety:

Subject: RE: Complaint against Cllr Blackburn

I am not clear what you are getting at here and I haven’t got the time to interpret your comments. The investigation relating to County Councillor Blackburn was undertaken by an investigating officer appointed by the Monitoring Officer in accordance with the Council’s processes. I have had no direct involvement. If however you feel that I have acted inappropriately or that the Council generally has not investigated these matters properly and is at risk of mal-administration then you should take the matter to the Local Government Ombudsman.

Let me paraphrase: “I don’t know what you’re talking about. I’m too important to be bothered with you, and if you don’t like it, sod off to the Local Government Ombudsman, who will back me up all the way to an unblemished and fully perked-and-pensioned retirement”.

As to “I have had no direct involvement” – even if this were true (which I doubt). Richard FLINTON’s email to me is nonetheless disingenuous. He should, of course (of course!), have directed the new Complaint(s) straight to Catriona GATTRELL. He should also have discerned that four witnesses with the integrity to volunteer their personal experiences of County Councillor John BLACKBURN might very well amount to evidence that could outweigh that pathetically lame defence statement. Readers may judge for themselves whether or not Richard FLINTON was privy to the intervention of MOTP-2 from this one sentence taken from an email to him of 25th February 2013, from MOTP-2:

But Richard FLINTON is “not clear what you [meaning me] are getting at”. Pardon me, Richard, but bollox.

It would appear that, once again we encounter an Executive Officer – a paid public servant – who, having been internally promoted to a position of the highest responsibility (one that demands greater integrity than some of the present incumbents can even begin to muster) has abdicated all responsibility and publicly disgraced himself, to boot – thereby demeaning his colleagues and his profession.

That is not acceptable. But I expect it to be a chapter conveniently omitted from Richard FLINTON’s Curriculum Vitae.

In conclusion, let me make something clear: I have not made any allegation against County Councillor John BLACKBURN in respect of his stamp collection, for the obvious reason that I was not present at the Conservative Party meeting(s) at which he is alleged to have boasted about subverting his Stamp Allowance for personal and/or party-political purposes. It is therefore impossible for me to form an opinion one way or the other as to his innocence or guilt. That does not prevent me from forming the opinion that the way in which the Complaints have been handled is a travesty of a Standards Investigation.

And I have been privy to (and retain) sufficient information, contained in authentic emails between Complainants and NYCC Officers, to be satisfied that I can make the following statement in considerable confidence.

But first, take note of this; I have, in recent months, invited Richard FLINTON, in good faith and on many occasions (as Councillor Mike WARD will substantiate), to meet with me one-on-one to discuss ways in which the ethical standards of NYCC may be elevated to something more closely resembling an acceptable level without tarnishing the deserved good name of the many elected members who would no more contemplate fiddling their Allowances than they would contemplate pushing granny off the side-walk..

Richard FLINTON has instead chosen the path of public censure. It starts here:

Nothing will come of these accusations; other than Richard FLINTON and Carole DUNN (neither of whom has thus far denied assertions on the NYCC web-site that an investigation into their actions is now in the hands of an independent Police Force) will no doubt continue plotting how to silence me.

He is paid by the public, in our service – and paid very well. In my view, he is betraying his paymasters – We, the Public. But a question remains; whose agenda does he serve?

All that notwithstanding; if I am mistaken – and, unlike our paid public servants, I openly acknowledge my own fallibility – if  I am mistaken, then I shall be happy to withdraw my accusations and furnish Richard FLINTON with my most humble, sincere and contrite apology.

But I shall require a very convincing explanation.

And even that will not prevent me from scrutinising his every action in the future. 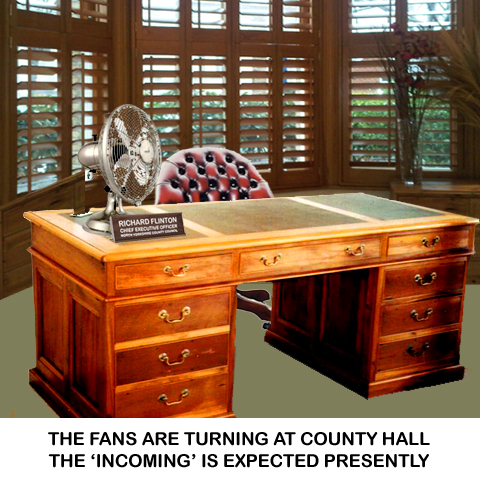