The gist of the story was this:

A member of the public authorised me to lodge a Formal Complaint on his/her anonymous behalf, in order that he/she could place evidence before the North Yorkshire County Council (NYCC) Standards Committee, alleging to have witnessed County Councillor John BLACKBURN bragging to a group of Conservative Party ‘rookies’ that he had, over a period of some years, subverted his Stamp Allowances to finance his electoral campaign(s). I lodged that Formal Complaint on 16th December 2012.

Early this year, a second member of the public, having seen my article entitled “NYCC: The Stamp(s) Of Authority” (published that very day), came forward to report that he, too, had witnessed the same (or very similar) bragging remarks from County Councillor John BLACKBURN, and he subsequently lodged a Formal Complaint of his own, duly acknowledged.

After an inordinately long period in which nothing further appeared to be happening with the two Formal Complaints (whose Complainants are not acquainted with one another), I was eventually provided (on 14th June 2012 – seven months into the affair) with a copy of a Report compiled by NYCC Investigating Officer Catriona GATRELL, in which she stated that she was giving “limited weight” to the evidence of the two independent Complainants (whom she had not bothered to interview, or even to question by email), but would be recommending to the Monitoring Officer (Carole DUNN) and the Independent Person (identity unknown), the exoneration of County Councillor John BLACBURN (whom she had interviewed only days before completing her Report), on the sole ground that, although he claimed he could not recall having behaved as alleged, she was giving “greater weight” to his evidence – which consisted of nothing more than his claim that he “would not do something like that”.

Having conferred with each of the Complainants (separately), I responded to Catriona GATTRELL on 17th June 2013, protesting the complete absence of due diligence in her investigation. I have received no response from her.

Nevertheless, on 4th July 2013, I received the actual Decision Notice (i.e. the ‘verdict’ – from which there is no avenue of appeal) reached by NYCC Monitoring Officer Carole DUNN and the Independent Person, accepting Catriona GATTRELL’s recommendation and completely exonerating ‘double-dipper’ County Councillor John BLACKBURN of any wrongdoing.

Who would have thought it? 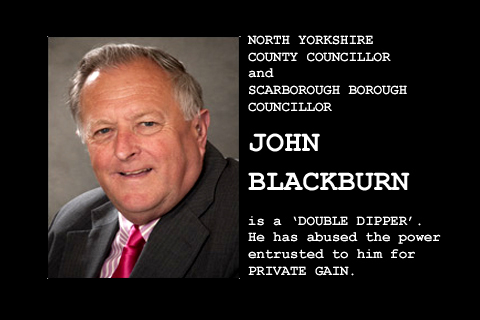 Under the FOIA, I asked NYCC how many Formal Complaint have been processed in the past five years (answer: thirty-five), and of those, how many have been fully upheld in favour of the Complainant (answer: two). In fairness, another one was at first upheld, though later reversed on appeal. Another was partially upheld. Nevertheless, Formal Complaints have achieved a success-rate of only 5.7% – only one in over seventeen has been successful.

I would like to be able to report on the extent of the punishment or sanctions handed down to the two County Councillors against whom Formal Complaints were fully upheld, but that information unfortunately has not thus far been forthcoming.

But it is worth remembering that even when a Formal Complaint has been fully upheld, the range of sanctions applicable to any elected member found to have breached the Code of Conduct is limited and lenient in the extreme. :

(a) issue a letter of censure to the member and where appropriate require an apology to be given to the Complainant;

(b) recommend to the member’s Group Leader that he/she be removed from any or all committees or sub-committees of the Council;

(c) instruct the Monitoring Officer to arrange training for the member.

There exists no option to suspend or disqualify the member or to withdraw his/her Allowances. A slap on the wrist is as heavy as it gets.

In short, elected members are to all intents and purposes unaccountable. The electorate may seek its remedy at the next election. The Complainant has no recourse whatsoever.

On a brighter note, one of the consequences of publishing reports here on Real Whitby about the extraordinary contortions that our local authorities are prepared to undertake in order to sweep the vast majority of legitimate Formal Complaints under the carpet has been that hitherto isolated individuals have begun to come forward – empowered by the first hints of progress that have been published on this web-site – with important corroboratory information. Much of this information confirms my impression that the Complaints Procedure was purposively designed to display an appearance of justice and fair play, whilst actually ensuring the very opposite: bias, partiality and plain old white-wash.

For example, I have recently become privy to a most illuminating ‘thread’ of email correspondence – too long to reproduce in its entirety here. The bones of it are as follows:

And that is where the ‘thread’ dries up.

But I can add to this the fact that neither I (as Complaint Friend to the Anonymous Complainant) nor the second Complainant himself have/has ever been informed that there were two further Complainants queuing up to accuse County Councillor John BLACKBURN of financial impropriety – and being “stiff-armed”. Without sight of the above ‘thread’ I would not (and could not) have known about this, to this day.

In summary, NYCC Investigating Officer Catriona GATTRELL not only failed to test the evidence of the first two Complainants, belittled their testimony and uncritically accepted County Councillor John BLACKBURN’s risible assertion that he “would not do” such a thing – she entirely withheld, in her Report, any mention of the fact that there existed two further Complainants, ready to corroborate the first two, who had been expeditiously side-lined by CEO Richard FLINTON, the top man.

Such is the practice of transparency and accountability at North Yorkshire County Council.

Of course, CEO Richard FLINTON may have withheld the MOTP’s Formal Complaint from Catriona GATTRELL. Or they may have colluded together in keeping further corroborative evidence out of the so-called investigation. Or Catriona GATTRELL may have been ordered to proceed in disregard of the MOTP and his fellow would-be Complainant. Any which way, one struugles to avoid the conclusion that there has been a disgraceful departure from due diligence on the part of NYCC Officers (i.e. paid public servants).

The entire cover-up of the BLACKBURN affair is now shot full of holes – though we may never know how many holes it really takes to fill our County Hall – and, in my view, NYCC Chief Exec Richard FLINTON has shown himself to be thoroughly disingenuous.

Small wonder, then, that I have no confidence in Richard FLINTON’s assurances that County Councillor Carl LES’s “impossible journeys” are to be investigated by the same auditing company (Veritau Ltd – owned jointly by NYCC and CYC) to which County Councillor Carl LES has recently been appointed a Director. (I promise that I am not making this up!).

In my view, the Standards Procedures of North Yorkshire County Council are being wittingly maladministered and ignored for the specific purpose of protecting certain elected members from the rather trivial consequences of their own self-serving actions.

Not only is this unethical and utterly unacceptable, it absorbs a great deal of public money keeping Council personnel in work. Futile work.