Pursuant to a long-running investigation of the Members’ Allowances-Expenses Schemes at North Yorkshire County Council – ranging from the ‘double-dipping’ of Broadband/IT Allowances, through  misappropriation of Stamp Allowances for party-political purposes, to exaggeration and falsification of Mileage Claims within the Travelling Expenses Scheme, Real Whitby investigative-journalist Tim THORNE published an article on Thursday 18th July 2013, entitled “NYCC Funding Conservative Party Jollies”.

It is a short article and I would recommend readers to take out a few minutes to familiarise themselves with the bones of the matter which, very briefly stated, are as follows.

Using data provide by NYCC under terms of the Freedom of Information Act 2000, Tim was able to show that County Councillor David JEFFELS (Con.) – one of 37 Broadband/IT ‘double-dippers’ (and one of 45 out of 72 Conservative County Councillors) – had submitted Mileage Claims Forms which included journeys to and from Conservative Party gatherings of one sort or another.

The list of Approved Journeys appears in Appendix 1, on page 14 (of 18) of the NYCC Members’ Allowances Scheme 2013/14 (May 3013) document. It does not include travel to and from single-part politically affiliated meetings. Some journeys are specifically excluded:

Duties for which travelling and subsistence will not be paid

Council for the following purposes:

• Acting as Governors of primary or secondary schools

There, in black and white, is the confirmation that some of the claims of certain County Councillors are not valid; Members of the County Council may not claim for “Political group meetings”.

Some have done exactly that. Consider, for a moment, the likely consequences faced by ordinary members of the public who make false claims . . .

And beyond the letter of the law, can it be appropriate that the taxpayer at large, irrespective of his or her political persuasion, should be called upon to fund extracurricular politically partisan activities? Not in my opinion.

Prior to publication of his article, Tim had emailed County Councillor David JEFFELS asking him to comment on his claims. This was the response that he received, six days later:

A reply to your query is being sent by Mrs Carole Dunn, Deputy ChiefExecutive of NYCC which I trust will answer your question.

Next, Tim emailed Carole DUNN, asking when he could anticipate her response on behalf of County Councillor David JEFFELS. Answer came there none.

Experience tells us (remember Carole DUNN’s predetermination that the ‘double-dipping’ of Broadband/IT Allowances was “an entitlement” ?) that, however serpentine the sophistry involved, County Councillor David JEFFELS will walk away without a blemish on his record.

I have been passed a print-out of an email, which I have transcribed and reproduce here for your edification:

To: Cllr – All Members

Members will be aware that over recent months we have attempted in the Members’ Allowances Scheme to clarify the position in relation to whether or not travelling expenses can be paid for Group meetings. In May the County Council agreed an amendment to the Scheme of Allowances to provide that expenses would not be paid for party political Group meetings, but that expenses could be paid for one Group meeting per cycle to members of Groups comprising at least 10% of the Council membership (seven) and provided that the meetings were strictly for the purpose of the conduct of Council business, and not for party political purposes.

We have had cause to undertake further research into the payment of allowances for these purposes, and will need to look in to it further before we proceed to make further payments for this purpose. Accordingly Members are requested not to submit claims for the attendance at the one per cycle Group meetings for the present time until the position is clarified. I will write to you further once the matter is resolved to clarify how the matter will be dealt with in future.

Firstly, keen followers of the local political scene will perhaps recall a highly critical article in The Scarborough News of Friday 17th May 2013, in which it was reported that County Councillors, at the first Full Meeting of the newly-elected Council, had voted in favour of amending the rule limiting the payment of additional Allowances/Expenses to Leaders of party-political Groups holding at least 10% of the full complement of 72 Members (i.e. 7.2, rounded up, in the past, to 8 elected Members), instead rounding down to 7 elected Members, thereby including the Labour Group Leader and the Independent Group Leader, each of whose Groups have only seven representatives at County Hall. It is to these events that Carole DUNN refers, in the first paragraph of her email.

The Scarborough News summarised its report in the sub-heading to the article, thus:

“County councillors have been blasted after a controversial rule change that will enable senior members to pocket thousands of pounds in ‘special allowances’.”

Public opinion was most closely reflected by the words of County Councillor Sam CROSS (Ukip):

“It’s a disgrace when people are having problems paying their bills and putting food on the table,” said UKIP Councillor Sam Cross, who voted against the amendments.

Secondly, drawing your attention back to the Subject-Line of Carole DUNN’s email (“URGENT PLEASE NOTE Expenses for attending Group meetings once per Council cycle”), I would suggest that her second paragraph is of special interest, for in it she urgently informs the Members that the party is over for Group meeting claims – a tacit admission that some Members have been claiming for journeys that are not authorised. Carole DUNN is shutting the stable-door after the horse has bolted.

Barely two months on from that self-interested manipulation of the rules, we now see County Councillor David JEFFELS driving (metaphorically speaking) on the wrong side of the double white lines.

And – more to the point – we see Carole DUNN embarking on one of her infamous semantic contortions to save his bacon. You and I may think that County Councillor David JEFFELS has been caught with his fingers in the pot, but Carole DUNN, whose task it is (amongst other duties) to monitor Members’ Expenses Claims (the clue is in her job-tile – ‘Monitoring Officer’), can be relied upon to concoct a form of words that will turn a simple fraud into “an entitlement” (as she did with the double-dipping imbroglio). According to minutes published on the NYCC web-site, remember, Carole DUNN is herself under investigation by the Police of an external Force – i.e. not the North Yorkshire Police.

Shortly after this article was submitted for publication, Tim THORNE sent me an email response that he had just received from Carole DUNN. I have underlined some passages for ease of reference when I address them, in due course.

Councillor Jeffels has referred to me your query relating to mileage claims, and I understand that you have also  submitted a Freedom of Information request and we will respond to that.

You have queried the position in relation to group meetings. Formerly the County Council’s Member’s Allowances Scheme did not specifically refer to group meetings. The Council has a long established practice of some groups holding one meeting per Council cycle to prepare for Council meeting business, and provided the meetings are for the furtherance of council business and not for party political purposes, travelling expenses have been paid in those cases where members have claimed.  The context for this is that North Yorkshire is the largest geographical county in the country, and many Council Members have to travel very significant distances for meetings. Contact between all members of groups on the Council can be quite difficult, particularly where numbers are significant and business cannot easily be conducted.

The Allowances scheme and approved duties list was clarified in February 2013 to state that meetings for party political purposes would not attract the ability to claim expenses, and indeed that has always been the case.  From the link included in one of your e mails, I think this is the version of the Scheme to which you refer. However, the position was further clarified in May 2013 to the effect that Members of the larger Groups (10% at least of the Council membership) could claim mileage for the attendance at one meeting per cycle solely for the purpose of the conduct of Council business.

I would say however that this matter however is still under review and it will be considered again by the Independent Remuneration Panel when it begins its work for this year.

It is no defence to an allegation that rules have been breached to assert that such has been the practice for many years. It is wrong now and it was wrong then. How much has been fraudulently claimed in the past?

All legitimate Council business must be attended and minuted by Council Officers. At least one of the meetings at issue was described by County Councillor David JEFFELS as a “Conservative Group ‘Away Day’. Does that sounds like legitimate clerked-and-minuted Council business? Hardly.

This is a truism. It is also irrelevant. The Conservative Group may convene wherever and whenever suits its members’ convenience. The taxpayer should not be paying their passages.

This is the document that I have quoted above: Members of the County Council may not claim for . . . Political group meetings.

Then how can a “Conservative Group Away-Day” qualify? Case closed.

Unfortunately for Carole DUNN – and the more so for County Councillor David JEFFELS and many others – nothing in her email accounts for multiple claims far beyond the specified (though arguable) “one per Council cycle”. (A Council cycle runs from one Full Council Meeting to the next).

NYCC is running on fumes.

In my eminently reasonable view, it is now Carole DUNN’s duty to refer County Councilllor David JEFFELS to the Standards Committee and the North Yorkshire Police. If past form is a guide, she will spectacularly fail in that duty.

It must be clear, by now, to even the most obtuse and naïve observers, that there is corruption to be found almost everywhere one looks. Equally obviously, our paid public servants seem willing to compromise their own integrity to cover it all up. That, too, must cease.

“Police & Crime Chair: The Anatomy Of A Cover-Up” 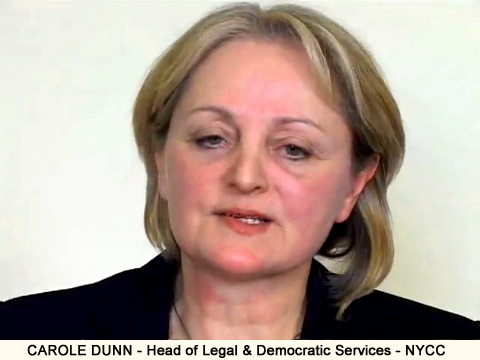