How The EU & Channel 4 Are Brainwashing You

UK migration "swarm" and other nonsense – some factual perspective : http://t.co/xmzcwQh7WH

Channel 4 and other left-leaning news organisations, such as the Huffington Post, are trying to downplay the Calais migrant crisis by cherry picking Eurostat (The EU’s Statistics Dept) figures on asylum to make it look as if the UK doesn’t take its fair share of migrants.

Have a watch of this segment from Channel 4 News.

Watch it again and listen to Alex Thomson of Channel 4 News carefully:

No wonder the perceived British approach, put up higher fences, more security in Calais, enrages so many of our EU partners, who take many, many times more asylum seekers and migrants than the British could even dream of.

Thomson goes on to quote Eurostat’s asylum figures, but what Channel 4 and the likes of the Huffington Post are not telling you is the full story of migration to the UK.

The UK Government doesn’t use the asylum system in the same way as other EU countries. We heavily use what Eurostat terms “First Residence Permits” or Visas as they are commonly known in the UK.

As you can see from the Eurostat First Residence Permit table above, the UK gives a home to far more than its share of non-EU migrants.

The First Residence Permit table also shows that the UK gives a home to more non-EU migrants than Germany, France, Italy, Austria and Hungary put together.

Out of 28 EU Countries, the UK gives a home to 33% of non-EU folks looking to reside in the EU for the first time. Add in the asylum stats and the UK will be taking more than any other country.

Enough to convince you that Channel 4 News are distorting the facts? Try Eurostat’s 2013 immigration statistics. 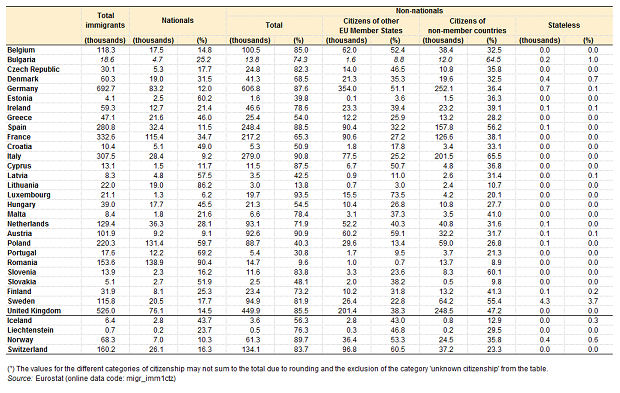 Are you wondering why Channel 4 is not availing you of the real migration facts? It probably has something to do with the millions of pounds of EU funding it receives and the EU referendum YES campaign is in full swing.