A Letter to the Editor by SBC Councillor Norman MURPHY, Deputy Leader of the Independent Group, slamming the continuing havoc arising from the Council’s incautious practices and policies regarding the Futurist demolition site. Will Stormin’ Norman now find himself on that lucidcrous “vexatious” list? Will he give a damn?

It was distressing, and somewhat upsetting, to read Steve Bambridge’s editorial piece in the Scarborough News, 10 January, in which he highlights the Council’s and the contractor’s failure to inform the residents, whose homes overlook the Futurist Theatre demolition site, that sheet piling was going to be used to stabilize the cliff. The residents were rightly surprised, concerned and probably “worried sick’”at this development as they had been told, before the work started, that sheet piling would not be used.

This failure was, as Steve says, “unfortunate” as “one of the fundamentals in any project of this scale is… simple communication”.

However, as we all know, “simple communication” is not something that the Leadership of the Council seem to know much about. Over the years, they have, on numerous occasions, inflicted their madcap and usually ill-thought-out schemes on the defenseless people of Scarborough with little or no consultation or consideration. The decision to demolish the Futurist Theatre, and the shambolic way in which the demolition is being conducted, are already classic examples of “Big Brother Council will do as it pleases”, regardless of the human misery it inflicts on the residents or the disastrous financial consequences it imposes on the rate-payers.

The cost of demolishing the Futurist Theatre, well over £4 million, must be viewed as an obscene waste of Council funds. The decision not to even try to salvage any of the historic artifacts from the theatre is considered by many people, myself included, to be a vindictive and spiteful act of revenge. Deliberately inflicted on the people of Scarborough because they had the temerity to fight and campaign to save the theatre. The proposed sale of the reclaimed land looks set to be an even bigger kick in the teeth for the residents of Scarborough with rumors abounding that the developer might get control of the site for as little as £650-thousand. And what are we going to get in replacement for the magnificent and historic building which they have demolished? Probably a block of flats and a café.

But it is perhaps the residents who live in the vicinity of the demolition site who will in the end pay the greatest cost. The Council’s arrogant disregard of the many warnings they received, all indicating that the ground on which the theatre stood is unstable, are now being proved to be correct. It has now been confirmed that the ground in the area is very unstable and the only solution available to make it stable is sheet piling. However, this method of stabilization was ruled out in the original planning application as it was known that it would almost certainly effect the properties in the vicinity and they would suffer damage. And, of course, that is exactly what is happening. As Steve says, now the “residents are seeing cracks starting to appear inside and outside their homes and fear their insurance companies won’t pay out”. But the Council will not relent. The contractors will carry on unless the piling is deemed unsafe by the onsite monitoring regime.

Although the Council have given the residents that live in the area reassurance that the sheet piling will solve the stabilization problem and their homes, even if damaged, will be repaired by the contractors, what are Town Hall promises really worth?

My guess, and I suspect this will be the view of the many residents who are sadly having to endure this ongoing nightmare, is that the Council’s promises will NOT, in the end, be worth the paper they are NOT written on. The hope that the current “regime” running our Council will “not let down the folk whose homes are affected” is I fear, a forlorn hope, and as Steve says in his article the residents “must be sick with worry”. 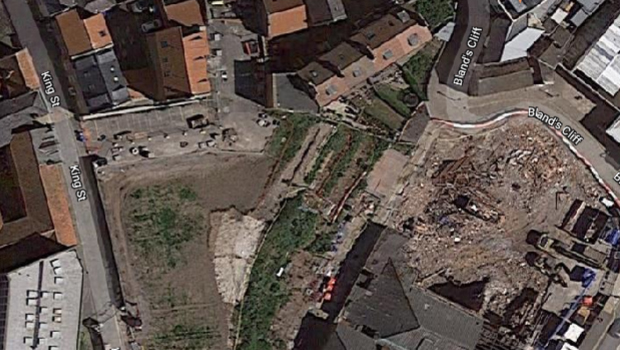