North Yorks Enquirer editor TIM THORNE has published the first in a series of articles examining the real-life performances of Councillors (beginning with Councillor Guy ‘Fonzie’ SMITH [Ind.]), as compared and contrasted with their pre-election promises published on their own election campaign leaflets.

It is refreshing to note that Councillor John CASEY [Ind.] (Filey) has reacted, within minutes, by publishing a sincere apology for having dropped the ball in relation to the highly contentious matter of the Council’s absurd decision to borrow £22M (almost doubling the borrowing cap!), over 40 years, to achieve the indefensible outcome of owning a building worth £7.5M, ‘justified’ by  an income, over ten years, of just £970K – if, and only if, all accommodation units are fully occupied throughout the ten-year contract.

Councillor CASEY has conceded that, with the benefit of more information, his vote in favour was a dreadful mistake. 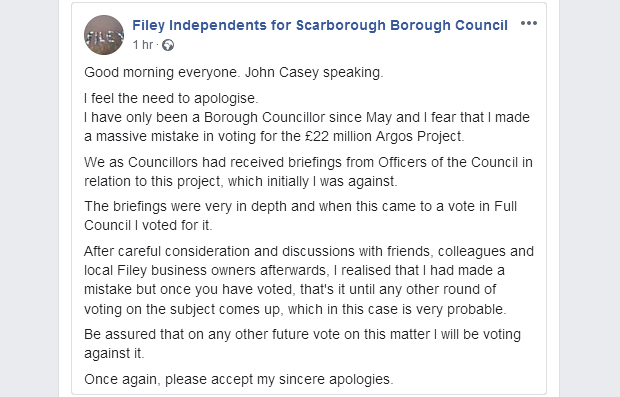 Has anyone else out there the courage and integrity to follow suit? Other, that is, than Councillor CASEY’s Group Leader Councillor Sam CROSS [Ind.], Councillor Michelle DONOHUE-MONCRIEFF [Ind.] and Councillor Mike COCKERILL [CIM], who all spoke and voted AGAINST the ludicrous deal.

Council Leader Councillor Steve SIDDONS [Lab.] is said to be furious that the Leader of the Independents, who are supposed to be sharing an alliance with Labour, has flouted his flagship policy.

Small wonder that the ‘old hands’ on the Council are predicting that the SIDDONS Leadership will be flushed down the pan before the year is out.

Meanwhile, is there a Councillor out there who will evince the “openness and transparency” to confirm a report from within the House of Secrets that SBC has been fined £20K by the Health & Safety Executive (HSE) for the failings which led to a serious accident at the South Bay Cliff Lift, and that the Council has been obliged to spend £150K on repairs and maintenance – notwithstanding which there has been another breakdown over the weekend? I am given to understand that the South Bay Cliff Lift is operated by Sheffield International Ventures (S.I.V.), whose financial difficulties were reported right here on the Enquirer.

Perhaps one of the Group Leaders could offer a statement for publication?