To my eternal embarrassment, I learn that I have committed a significant error of judgement, which I now hope to rectify.

In the Part 2 of my two earlier articles reviewing the forthcoming NYCC elections (insofar as they concern electors of the Borough of Scarborough), having first set out, in Part 1, what I consider to be ‘hot favourites’ in SEVEN of the seventeen Divisions, I proceeded to identify what I considered to be the SEVEN most fiercely contested.

The first of these was Castle Division:

My prediction was that this would be a tight three-cornered affair between the incumbent, Janet JEFFERSON; the former Labour Leader, Colin CHALLEN; and the very popular and Council-experienced local man, true Independent Guy SMITH.

Since publication of Part 2, I have been astonished and impressed to note that, throughout social media, there seems to be a groundswell of support for South Bay’s famous ‘Donkey Man’ – Guy SMITH – particularly in respect of his stance on the West Pier proposal (see above), ARGOS and the Town Square, as well as more mundane but nonetheless vital issues like residents’ parking, public toilet facilities and recreational space for kids. 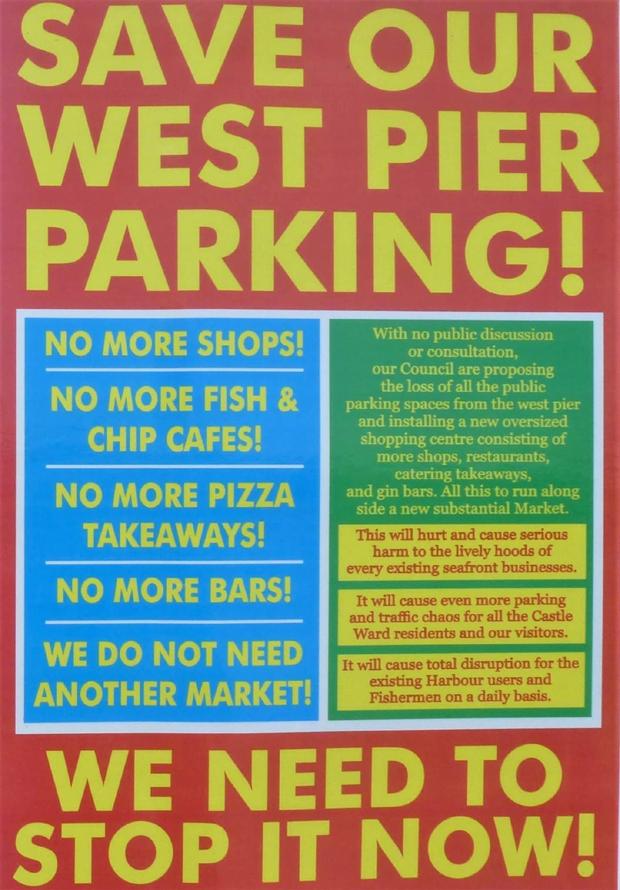 I have even seen scans/photos of Guy SMITH’s leaflets spreading far and wide.

There is plenty to read on Guy SMITH’s leaflets, but the key issues are clearly identified and set out in plain language. No political hackneyed claptrap here. ‘Real life’ and straight to the point.

Clearly, I underestimated Guy SMITH, for which I apologise – both to him and to readers (especially Castle Division electors).

The two Labour members for SBC’s Castle Ward seem not to have immersed themselves in Bottom End life and the Labour ‘brand’ is suffering grievously under an increasing burden of anti-SIDDONS sentiment, so Colin CHALLEN suddenly looks to have a mountain to climb.

And many are commenting that a new Council needs new blood. The JEFFERSON years are part of the old guard. Bearing in mind that these elections will set the Council membership for five years (rather than the usual four), many feel that several of the old guard may not live out a five year term. They want a younger, more dynamic, more ‘hands on’ representative at the new, far more more professional Council.

Make no mistaken, there is an intense desire for change in Castle Division and it is marching on a broad front; all the key figures of the Bottom End are rooting for Guy SMITH – the AYCKBOURNs, the NORMANDALEs, the CORRIGANs, the FOXs, the fishing families, the hospitality businesses, the retailers are now joined by a growing number of ordinary folk (the ‘little people’, as SIDDONS reportedly refers to them) and, if FaceBook is anything to go by, Guy SMITH now looks home and hosed.

With the benefit of hindsight, I now concede that Guy SMITH should have been on my list of ‘hot favourites’ – not a mere hopeful in a three-horse race.

When I emailed Guy SMITH, asking him to express his aspirations in a nutshell, I was struck by the honest simplicity of his answer:

If we could elect ninety Councillors like that, we would have a Council worthy of our support.

Readers are invited to review the Guy SMITH leaflets, below. Those of you in Castle Division would do well to study them before going to the polls. 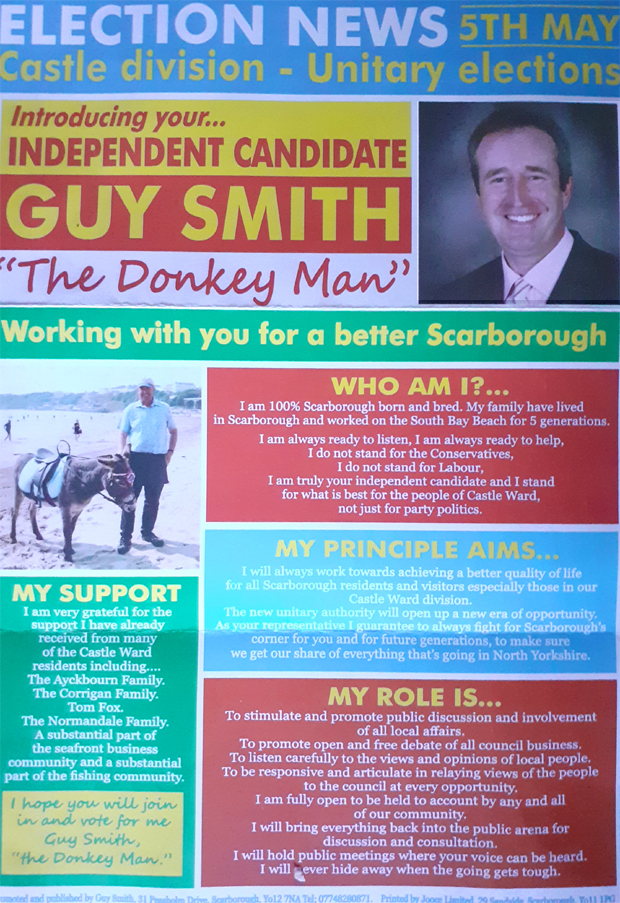 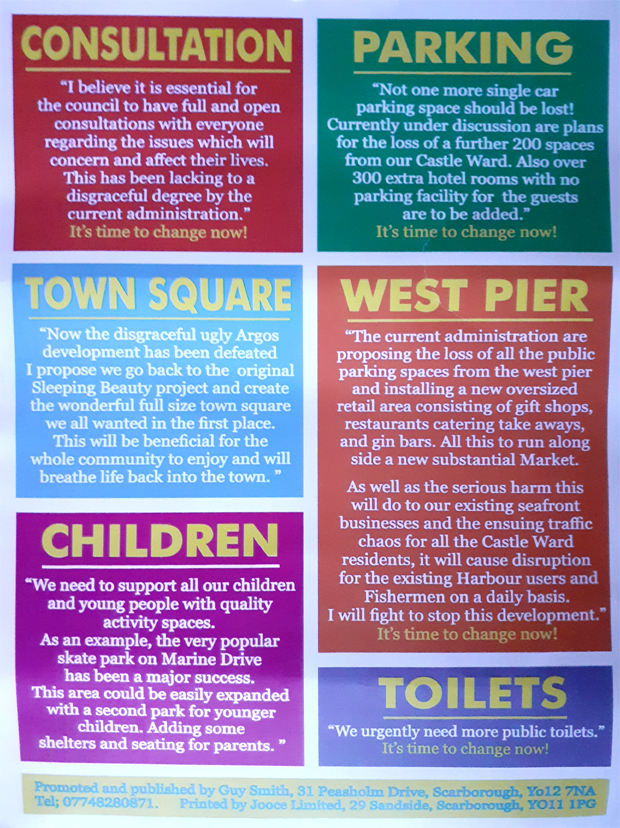 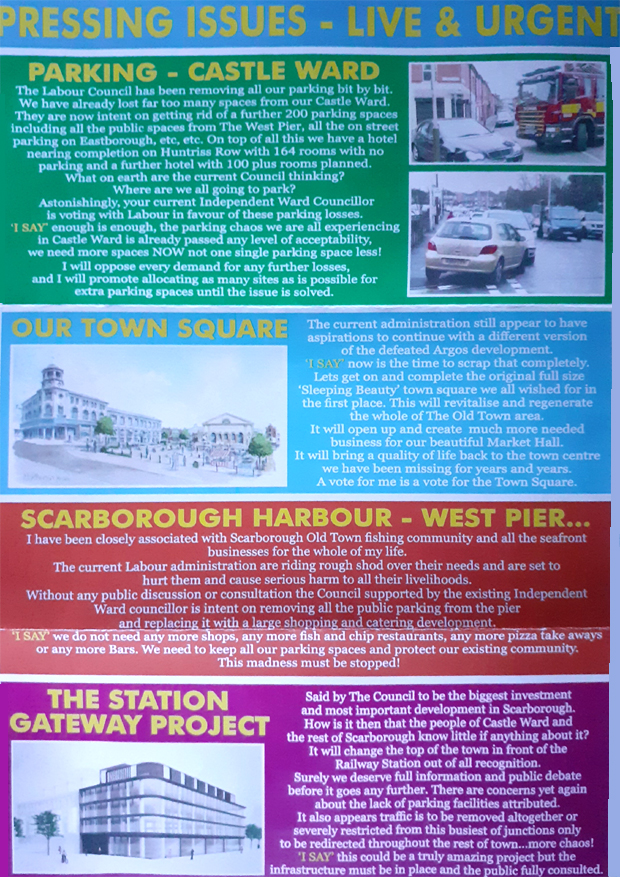 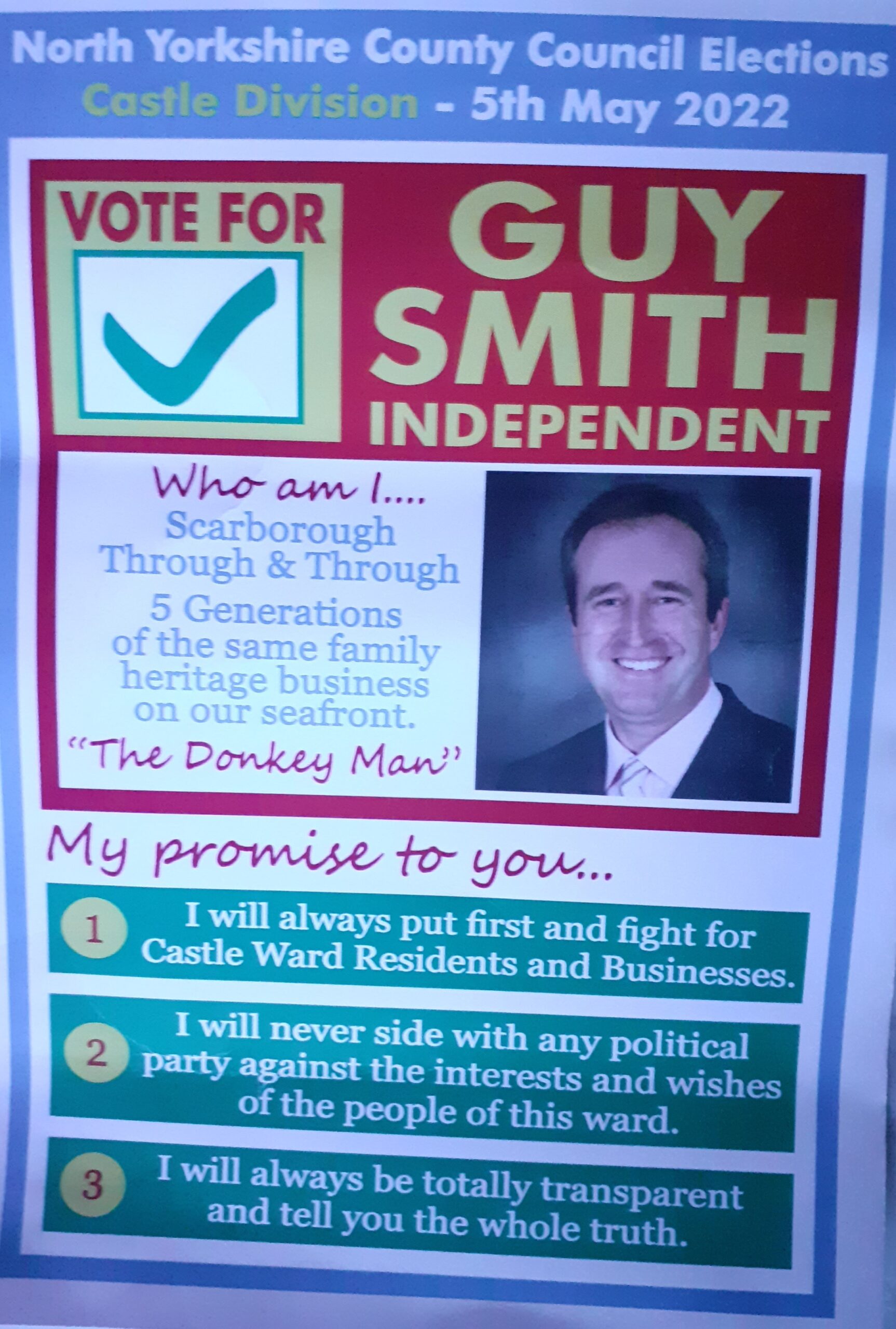 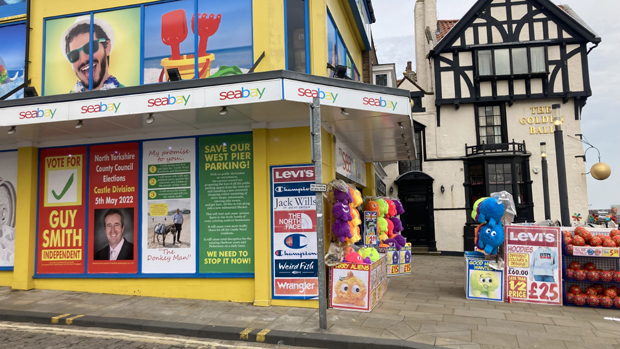